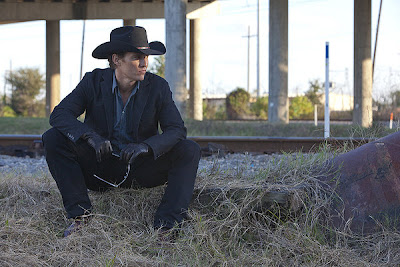 It's very gratifying to see that a scuzzy, nasty, little crime drama like Killer Joe is enjoying some success at the UK box office. During its two weeks of release, it's burrowed into the bottom of the list rather nicely, pulling some fairly impressive numbers for an arthouse release, albeit an arthouse release at the smaller end of a wide distribution, featuring a relatively big Hollywood star. In that time, I've mostly been trying to put my finger on whether or not I liked it.

I've seen it twice, and now that I can bring myself to eat chicken again, I can tell you that Joe Cooper, the killer of the title, is a detective who moonlights as a contract killer, charging $25,000 a hit. He's hired by Chris and his family, to kill Chris' alcoholic mother and cash the insurance in little sister Dottie's name. The trailer trash brood have trouble pulling the advance together, but a meeting between Joe and Dottie puts an idea in his head, and the family all too easily agrees to use Dottie as a retainer for Joe's services.

Much has been made of the film's shocking ending, and so I do have to say that the ending shocked me. However, I like a lot of what comes before the ending, and the larger part of the film will be the main focus of this review. At the same time, I think that the ending, which is basically a drawn-out scene that lasts about 20 minutes, is so inutterably and unexpectedly nasty that it's actually contributing to the film's success. People are talking about it, but not spoiling it, and I think that's generated some positive word of mouth. In terms of the film on its own, I admired the theatrical manner in which that extended scene is staged, in a film that's adapted by Tracy Letts from his own play.

Another potential draw is the ever-leaning Matthew McConaughey, who retains verticality long enough to give the performance of his career. The exact reason why I haven't liked McConaughey in many of his roles prior to this point is that his drawling charisma is unsuited to the types of role that he's given. He doesn't sound charming as a romantic lead, as much as sleazy, and recent roles in films like this and The Lincoln Lawyer have seen him come into his own. Joe is a very sleazy character, with a warped moral sense that strictly adheres to good manners, and his contradictions are what make him so scary, and compulsively watchable. 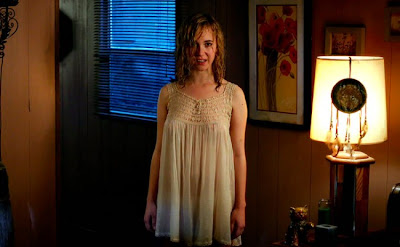 It's a more cinematic telling of a stage play than I've seen in other stage-to-screen adaptations- when it does dally with more theatrical staging, it's happily more reminiscent of intense and suspenseful scenes in the likes of Inglourious Basterds. But with the characters created for the stage, you can rely upon them to give actors like Emile Hirsch, Thomas Haden Church and Gina Gershon room to perform, while veteran director William Friedkin gets under the skin of the piece with some canny shots, and foregrounding the sexual imagery and politics that form the dark heart of the story.

Juno Temple gives a bravura performance as the object around which the film centres, though actually an innocent young girl. Dottie is starry-eyed and precocious in a way that never gets annoying, and her interactions with McConaughey, as both his collateral and the object of his weird affections, are only so unsettling because her innocence is so perfectly pitched. She simpers about the true love she shared with a fat boy in her class when she was 12 years old, completely oblivious to the promiscuity that her dreadful family expect of her. Near the beginning, Hirsch's Chris seems shocked that she's still a virgin at her age, before having an incestuous dream about her.

At times, I couldn't make hide nor hair of its meaning, even on a second viewing, but I feel safe in saying that it's not misogynistic as much as it's about misogyny. Even with that already infamous scene towards the end of the film, Friedkin is too mature to view the subject with leering complicity. Instead, there's almost an academic interest in this grubby little situation, with some visceral action and buckets of dark humour thrown into the mix. Part of the reason I want to emphasise the earlier part of the film over its finale is that there's actually a lot of laughs in here, up to a certain point, largely emanating from the brilliant fecklessness of Thomas Haden Church's useless patriarch. 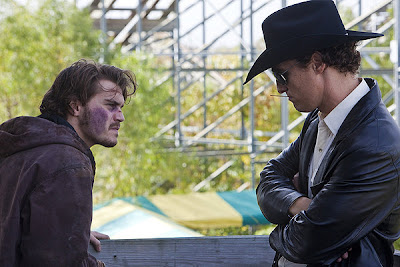 Killer Joe gets quite staggeringly nasty in its final movement, as befits a film about such scuzzy people, treating each other like shit, but the build-up of atmosphere and tension works well. It's darkly comic in the tradition of the Coen brothers, but given how Friedkin pre-dates them, it's interesting to see how such a renowned director has adapted. He seems as vital and relevant as ever in here, and he reaps the benefits of both the source material and its new medium by coaxing superb performances from McConaughey and Temple, and peppering the breakneck pace with some cool shots and shocking moments.