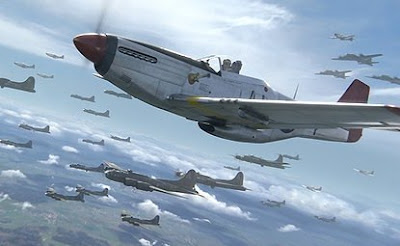 It's handy, that Red Tails is absolutely unconcerned with delivering a history lecture, because the script has about as much insight into racism towards African American soldiers during the Second World War, as producer George Lucas' Phantom Menace had into taxation and whatnot. For better or worse, Lucas' intention was to create a Boys' Own adventure flick.

And so, while the film might be "inspired by real events", it centres around fictional characters in the historic 332nd Squadron, made up of Tuskegee airmen who were the first African Americans to serve in the US Air Force. Our heroes have nicknames like Easy, Lightning and Ray Gun, and they have the skills to match, but on account of their race, they are constantly underestimated and diminished by the higher-uppers. When the determined Colonel Bullard gets the squadron some proper missions against the Luftwaffe, it's time for them to prove that they're just as capable of defending their country as any other American.

We recently saw the first trailer for this year's Django Unchained, Quentin Tarantino's slavery revenge movie. I mention this not to lump together all movies with black protagonists, but because you can already see Tarantino's style coming through, in the action and the dialogue, and we can assume, if Inglourious Basterds' ultimate Holocaust revenge fantasy is anything to go by, that the film will have a big statement, that will make a big impression upon release. It might be another movie about black history by a white filmmaker, but it's that personality that I kept thinking about, and longing for, in large parts of Red Tails.

There can be little doubt that Lucas had the best intentions in making this film- he funded it himself and distributed it independently, after developing the project outside of the studio system for 25 years. Whatever his best intentions, the problems with George Lucas making this film all stem from the fact that he's George Lucas. He's not credited for the script, but its pacing and dialogue stink of his Star Wars prequels. His fingerprints are all over this, and perhaps that's why it feels so inoffensive, on the whole. 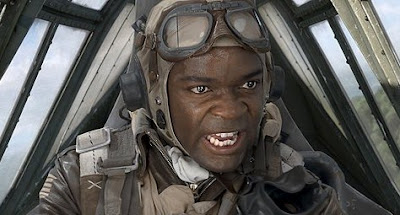 Don't get me wrong- I loved the idea of this being a well-intentioned popcorn flick about black history, rather than another film about race that portrays its characters as either victims or villains. I would have liked the heroes to match up to their cool names, and to have become invested in their battles against enemies both foreign and domestic. I really wanted to like this film altogether. But aside from not registering its outrage at the prejudices that pressured the Tuskegee airmen, it doesn't register anything with the audience either. Not excitement, not humour, not pathos; frankly, it's a bit of a washout.

The biggest problem is not that it's generic- it just doesn't earn any of its generic story beats by the time that they arrive. For a film about WW2, it seems uniquely without conflict. For instance, David Oyelowo's Lightning is clearly a hothead, who's insubordinate in his attempts to show off and always seems on the verge of endangering his fellow squadron members. You can see your way to a lesson hard learned for this character, but the lesson never comes, and the character arc might as well have been aborted. The problem is, Lightning is pretty much the protagonist, and so, nothing about the film, particularly its ending, feels like its been earned by involving us in the story.

Some of the surface criticisms of the film pale in comparison with these deeper problems. I didn't find the representation of the Germans any more offensive than the representation seen in Indiana Jones. Even if it doesn't register the desired effect, this is a big, brash adventure movie in that tradition, so I took issue with the typically poor dialogue more than any perceived jingoism. Likewise, although the CG effects only look up to the standard of the then-groundbreaking Revenge of the Sith, now a seven-year-old movie, the action setpieces themselves are still impressively choreographed- unsurprising given how the aerial fights in Star Wars always drew inspiration from WW2 dogfights. 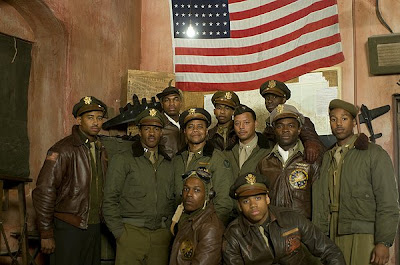 As honourable as its intentions may be, Red Tails can't shake a weak script and some downright awful editing, so it only manages to be an honourable failure. The film just exceeds the two-hour mark, but imagine the dialogue from Attack of the Clones, but with none of the John Williams score to back it up, for that length of time. For all the goodwill I had towards it, going in, I found myself bored. I can deal with largely being able to plot out the film, on its own generic terms, but I had hoped for a little more excitement and exuberance from such an obvious passion project.