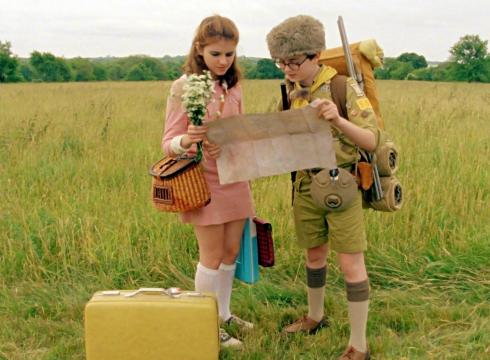 I realise that I'm in the minority on Wes Anderson's previous film, Fantastic Mr. Fox, whose script I  despised for its self-indulgent disregard of Roald Dahl's sense of humour in favour of the auteur's own hipster-ish vision. I'm retroactively even more angry at what appears to be a total misunderstanding of the young audience, after watching Anderson's latest, Moonrise Kingdom, which shows a consummate understanding with children.

It's one of only a few movies I can think of that centres around boy scouts, and Anderson's central conceit is to show the young scouts acting surprisingly maturely, for their age, while the adults in the movie are flustered into a frenzy by their behaviour. Our hero is 12-year-old Sam, (Jared Gilman) an unpopular Eagle Scout who affects a corncob pipe and a coonskin cap.

Moonrise Kingdom is now showing in cinemas nationwide.
Posted by Mark at 09:36 No comments: 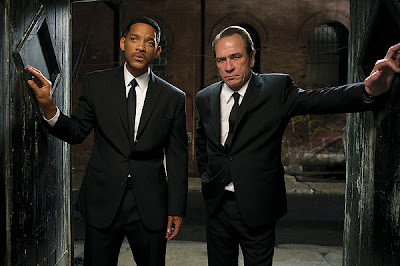 There's a telling moment in Men in Black when Will Smith's J asserts that people are smart enough to be told about the existence of aliens, and Tommy Lee Jones' K grouchily corrects him. "A person is smart", he drawls, "People are dumb, panicky, dangerous animals and you know it." It's a line that sums up the funny, cynical world that the film established, and shows just how lacking Men in Black II was, as a film that seemed made by committee.

Ten years later, after a whole bunch of production horror stories and what seems like a near-constant rotation of the first two films on terrestrial telly, we have Men in Black 3, a film that is still, to a large extent, missing that spark that made the first film so special. At least there's a better villain than in the first sequel, in the shape of Boris the Animal, a psychopathic Boglodite who languishes in MIB's lunar prison after being arrested by K. He and his partner J are still policing alien activity on Earth when Boris escapes prison, travels back in time and kills a younger K, leaving J with 24 hours to correct the course of history and save his partner. 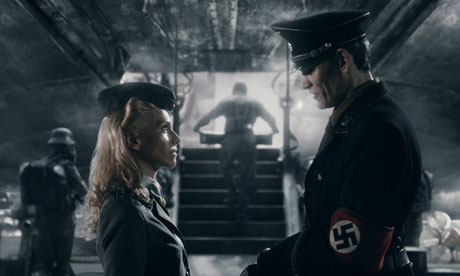 Early on in Iron Sky, there's a scene that is either utterly ingenious, or the Finnish equivalent of Friedberg and Seltzer's unfunny, plagiarising parodies. If you've been using the Internet for longer than a week, the chances are that you're familiar with the Downfall meme, which uses a single scene from the film about Hitler's final days, and manipulates the subtitles to make it appear that he's whinging about current affairs and fanboy niggles. I'm choosing to look at this as a watershed moment in Iron Sky.

The re-staging of the famous scene is based around imperious publicist Vivian Wagner (Peta Sergeant), who's in charge of US President Sarah Palin's 2018 re-election campaign. If, at this point, you get the gag and go along with it, then Iron Sky is a film you're going to enjoy. If you don't like this moment, it's possible that the film isn't all that you thought it would be, from the ingenious logline; “In 1945, the Nazis went to the moon. In 2018, they're coming back.”

Iron Sky is released on DVD and Blu-ray this Monday.
Posted by Mark at 13:40 No comments: 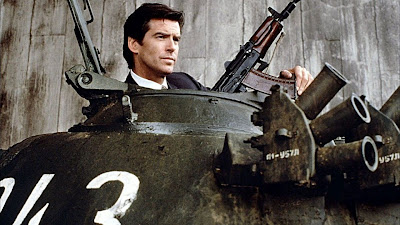 Martin Campbell has been at the helm for the last two James Bond reboots, and having loved Casino Royale, I found the experience of revisiting GoldenEye to be a disappointing one. With Licence to Kill having flopped at the box office, Eon ran into legal troubles that held up a proposed third outing for Timothy Dalton for a whole six years, and he quit before he could resume being a magnificent bastard.

Enter Pierce Brosnan, who might never have had to remember his tour-de-force performance in Taffin if this role hadn't propelled him to stardom. He gets off the blocks quite quickly, when he gets into some bother with Russians, completely forsaking the international bromance established in the Moore era. A crime syndicate, ran by the mysterious Janus, then hijacks the Russians' GoldenEye satellite- a secret weapon that fires an EMP discharge capable of wiping out electrical equipment all over the world. 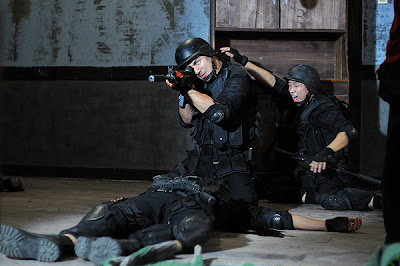 I've generally resolved not to mention American language remakes in reviews of popular world cinema releases, because it's beside the point of actually reviewing the original. I'm flouting that rule in the first sentence of this review, because the already-announced remake of The Raid is even more pointless than most Hollywood chunder of its kind. Why remake a film which is primarily lauded for its action scenes? The most you can do with the material is attempt to recreate it shot-for-shot, or clumsily try and fail to better the choreography of the first time around.

Essentially a showcase for the explosive big screen potential of silat, a martial art which appears to be based around punch-kicking and kick-punching absolutely everything that crosses into your eyeline, The Raid's script is minimal in the overall proceedings. There is a story, which involves an Indonesian SWAT team raiding a tower block full of violent, criminal martial artists, but Welsh writer/director Gareth Evans has chosen to largely tell this story through action sequences, and otherwise in Indonesian, rather than the English language. See how pointless the remake will be? 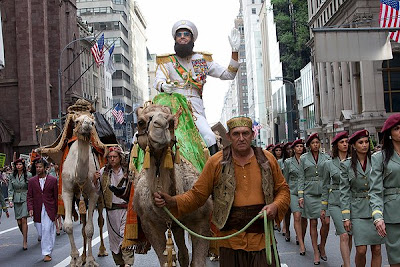 You can just about measure the distance between Charlie Chaplin's satirical classic, The Great Dictator, and Sacha Baron Cohen's latest character piece, The Dictator with a really massive measuring thingy. If I'd said that the difference between the two films was "Great", it'd be a little too on-the-nose, and really, as bloody-nosed as the latter film leaves feminists, right-wingers and people who don't like rape, I want to avoid doing the same.

So, the latest character from the creator of Ali G, Borat and Brüno is Admiral General Aladeen, an insane, man-child despot who rules over the oppressed North African country of Wadiya. An advance in the country's nuclear programme brings about two shocking developments- a failed assassination attempt, and a United Nations ultimatum demanding that Aladeen appears before the world to explain himself. Forces conspire to liberate Wadiya from Aladeen's lovingly tyrannical rule, and when he's stranded in New York, he has to return to oppress his people once more. 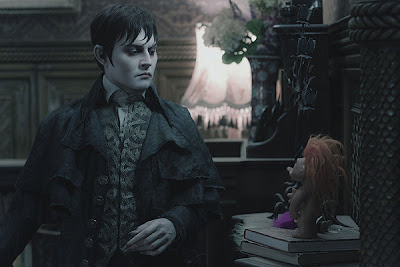 It wouldn't be fair to see Tim Burton's two Batman movies as the beginning of his current "one for them, one for me" mode of directing. Although Batman shows the steady hand of producers who don't want to risk too much, in comparison to the gorgeous weirdness of Batman Returns, they're both good movies. Now, it seems that for every Big Fish or Sweeney Todd, we get a Charlie and the Chocolate Factory or an Alice in Wonderland. Dark Shadows marks the point where Burton's personal projects have started to pong a little.

The movie is based on a 1970s soap opera with supernatural elements, that eventually turned into a full-blown science fiction/fantasy show with vampires and time travel, of which Burton and star Johnny Depp were both huge fans, in their youth. Depp plays Barnabas Collins, a fishing magnate who spurns his besotted witch maid, and finds himself cursed to be a vampire. On top of that, she has an angry mob bury him alive, to remain in the ground for two centuries. He's discovered in 1972, and finds that the Collins dynasty has fallen upon hard times, resolving to use his longevity and guile to restore his family name.

THE LUCKY ONE- Review

The heroes in Nicholas Sparks' novels tend to be reliably reconstructed paragons of sensitive masculinity, often having served in the armed forces in some way or another, only to return from active duty and fall in love with a woman who will appreciate their numerous talents, their sense of fairness and justice, and, above all, their gentle spirit. Following in the footsteps of Ryan Gosling and Channing Tatum, such a hero is not the biggest leap for Zac Efron, as an actor.

The latest Sparks movie is based on his novel, The Lucky One, referring to a US Marine named Logan, who narrowly avoids being blown to bits by an IED while serving in Iraq, by the grace of investigating an abandoned photograph in a pile of rubble. The photo depicts Beth, a kennel worker and single mother who lives in Louisiana, and Logan vows to find her and thank her, upon his return to the States. But of course, stuff gets a little more complicated than that.

Jason Statham characters don't really have many problems that can't be solved by punching and/or kicking, so the crowd-pleasing action star isn't exactly famous for his emotional range. Although it's not long into Safe before we find him dressed for The Transporter, traumatised “garbage collector” Luke Wright is a more restrained and dramatically interesting hero than the likes of Frank Martin, or Chev Chelios.

Luke falls afoul of Russian mobsters when he refuses to flunk out of a cage fight, meaning that some powerful people lose an awful lot of money. Their vengeance is inventive, and Luke is essentially forced to become a hermit. He's about to end his miserable existence when he encounters Mei, a prodigious Chinese girl who has been entrusted with a very important number- a code which contains the combination to a safe. The mob, the Triads and even the corrupt NYPD are all gunning for the code, but Luke takes it on himself to protect the girl. Punching and kicking ensues. 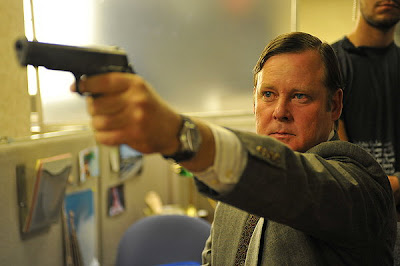 For a moment, I considered constrasting two American comedies in yesterday's post- American Pie: Reunion, and God Bless America. After realising I had too much to say about both, and that one spends most of its time satirising what the other represents, I thought it was better to divide them up. It's hard to imagine anybody who's still laughing at Jason Biggs' inability to have a wank in peace being all that interested in Bobcat Goldthwait's new film.

The subject matter is predictably bleak. Frank is a divorcee, who is basically mad as hell, and he's not going to take it any more. Around the same time, he's diagnosed with an inoperable brain tumour, just as his rage at American politics, pop culture and people reaches its peak. Teaming up with a similarly cynical teenage girl, he opts to interfere in the cultural development of pre-warp cultures (actual dialogue), by killing the living fuck out of every mindless arsehole he encounters. 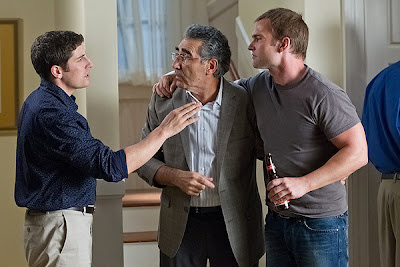 "It's wonderful, it's magical, oh boy, here it comes, another mouth." So says Homer Simpson, when Marge is giving birth to Maggie, and that's a difficult sentiment to shake, when watching American Pie: Reunion. The difference is that the episode in question, "And Maggie Makes Three", ends with Homer falling completely in love with his third child once it arrives. There's considerably less to love in this belated fourth (sorta) instalment in the pie-fucking saga.

Presumably for reasons of scheduling conflicts with the cast, East Great Falls High holds 13-year school reunions, so the original class of '99 return to their hometown for a weekend of debauchery and catching up. The A-plot of the film is based around the negative effect of parenthood on Jim and Michelle's sex life, but once he meets up with Kevin, Finch, Oz and Stifler once again, this quickly reveals itself as a regression into being desperate for sex and not getting it, wrapped up in a whole ton of subplots about the other characters.