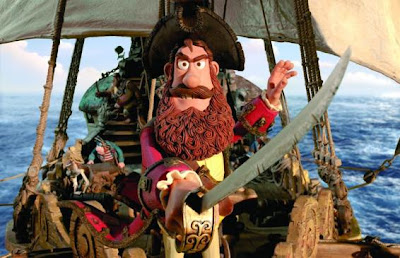 After the strangely predictable disappointment of Cars 2, we animation fans can at least still cling to one maxim- Aardman really can do no wrong. Even the slightly less enjoyable Flushed Away was a rollicking good time, and their endeavours in feature films, from Chicken Run to Wallace and Gromit: The Curse of the Were-Rabbit, and their recent success with Arthur Christmas, have been worth getting excited about.

The Pirates! In an Adventure with Scientists! is no exception. The endearingly titled film, based on Gideon Defoe's series of books, follows the Pirate Captain and his crew, who are, by their own admission, a bit rubbish in comparison to top Pirate of the Year contenders like Black Bellamy and Cutlass Liz. Nevertheless, the Pirate Captain gets it in his head to secure some booty that will win him the prestigious award, but instead, butts heads with Charles Darwin and inadvertently makes the scientific discovery of the century.

Although the film is in 3D, The Pirates! is more of a return to Aardman's stop-motion roots, after the CG-animated Arthur Christmas. While I very much liked the design work on Arthur Christmas, it just doesn't look quite as good as some of Aardman's more painstakingly animated stuff. Fingerprints are all over the scurvy curs in this latest adventure, and the lighting and cinematography is pretty much flawless. Never mind the light-loss that comes with 3D, eh? More obviously than ever, you should be seeing this one in good old 2D. 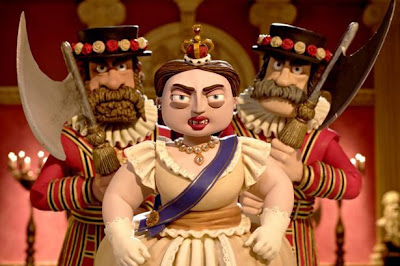 The visuals are as sumptuous as in Aardman's last feature-length claymation, The Curse of the Were-Rabbit, and Defoe's script, from his own book, has enough charm and wit to sink three Pirates of the Caribbean films. Captain Jack Sparrow might have popularised pirate characters in the cinema, but should The Pirates! become Aardman's new franchise, it's already in much better shape than the water-logged Disney movies. As ever, it's a straightforward plot, without any fear of going for funny, surreal humour. The endless salvo of jokes and sight gags is aimed at absolutely everyone at once, and the film hits the mark more often than not.

One of the parts of the film that I really enjoyed was the cast, which is made up of big name British actors like Hugh Grant, David Tennant, Martin Freeman and Imelda Staunton. But crucially, they're doing actual voice acting, rather than simply lending their own voices. Grant doesn't sound an awful lot like Grant, because Aardman gets what their former distribution partner, Dreamworks, only sporadically accounts for; that the animation and the characters hold more appeal than, say, the contribution of Jack Black or Ben Stiller. Only Brian Blessed really sounds like Brian Blessed, but that's entirely forgivable- when has anybody been more perfectly cast than his Pirate King?

While none of the lovable characters are as iconic as Gromit, the characters who don't speak are fun to watch too, with Darwin's "man-panzee", Mr. Bobo, providing the centre of some cute gags, and Polly the "parrot" providing the film's cuddly heart. The film still oozes that eccentricity and Britishness that Aardman have come to typify, with references to Blue Peter and kitchen volcanos aplenty. Its liberal rendering of history also makes for gleefully off-kilter portrayals of a simpering, lovelorn Darwin, an imperious and deadly Queen Victoria, and Jane Austen getting a bit cross with John Merrick. 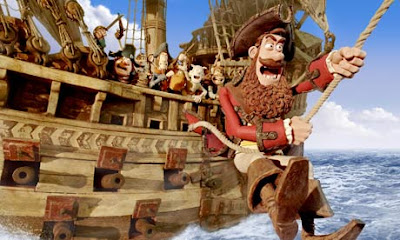 The Pirates! in An Adventure with Scientists! is breezy, laugh-out-loud entertainment. I'll end this review by talking about the way that the film ends- to wit, the closing credits. By lining up all of the sight gags in the film, from plot devices to the intricate background artwork, of which you might have caught only a quick glimpse in the midst of the action, the credits kept every bum in its seat until the lights finally came up and the screen went dark. The film provoked gales of laughter for literally its entire duration, and pretty much everyone, not least yours truly, left with a smile on their face.