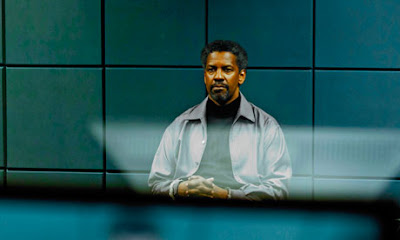 I'm alive, I promise. It feels like ages since uni properly got on top of me like it did last week, but now that I'm sitting on top of the still-ballooning mountain of work once more, I can resume service, to you, the reader, with the regular blog posts that you deserve, nay, crave. If you found the temporary outage annoying, imagine how hard it is to be a fan of Denzel Washington and/or Ryan Reynolds.

Both are extremely likeable leading men who've been in a lot of middling to crap films of late, and they're together at last in Safe House. Reynolds plays Matt Weston, an inexperienced CIA agent who's stationed at a safe house in South Africa, where approximately nothing happens, all day, every day. Then, out of the blue, an uber-bad rogue agent called Tobin Frost is captured in Cape Town, and deposited into Weston's custody. Frost is carrying some important information, so it's not long before the safe house is compromised, and the rookie has to go on the run with his dangerous prisoner.

I make the above statement as a big fan of both Washington and Reynolds. It's only recently that I've truly appreciated how brilliant Washington is, even in his worst collaborations with Tony Scott, and he's truly one of the best actors out there. His presence always elevates a film, but it's Reynolds who has recently struggled, in the gargantuan task of rising above dreck like Green Lantern and The Change-Up. Perhaps the best reason to see Safe House is the interplay between these two very likeable actors.

Tobin Frost is a big, bad egg- perhaps not as truly menacing as Training Day's Alonzo Harris, the role that won Washington his second Oscar, but still in that class of character that is different from his usual roles. This gives Reynolds some interesting material as Weston, who's about a million miles from being a hard-bodied, hard-headed action hero. On the contrary, he seems to be on the verge of tears for a lot of the movie, taking a hell of a lot of punishment as the amoral Frost fucks with his head and leaves a trail of dead bodies behind them.

It's unfortunate, then, that the overall plot is nothing so memorable. Having watched Daniel Espinosa's movie, I'm still not entirely convinced that it wasn't directed by Tony Scott- it comes from his same technically adept but otherwise yeoman-like school of action cinema that really just leaves me cold. The fight choreography is better than many of these films that have aped the look of the Bourne films, but oddly, the presence of Bourne's actual cinematographer, Oliver Wood, does nothing to abate the incoherence of the action editing. Worse still, supporting players like Brendan Gleeson and Vera Farmiga are thrown away in parts that really amount to less than they might appear. 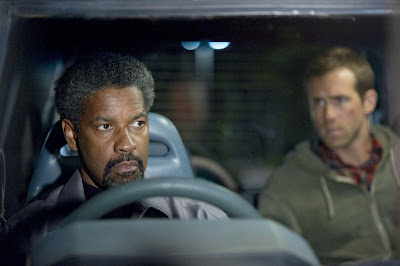 Safe House is a serviceable DVD rental, elevated by the strange, inverse chemistry between the leads, but I'd struggle to recommend seeing it in the cinema. Like many Bourne-alikes on the big screen, I found it somewhat headache-inducing. It's brazenly uncomplicated, and Washington and Reynolds are trading punches, both figuratively and literally, throughout in a way that's very entertaining to watch. I still suspect it would be better enjoyed at home than in the cinema, where the only real thing to recommend it would be the look of Cape Town- an unexpected setting for an otherwise humdrum thriller, but nonetheless, a setting of which I'd like to see more.