The Zero Room #12- The Doctor, The Widow & The Wardrobe 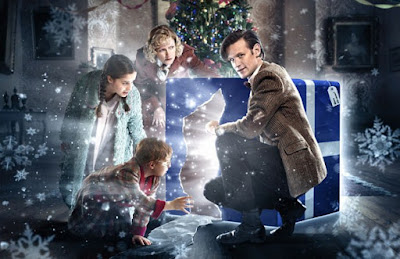 After the head-sploding, universe-mashing consequences of Series 6, this year's Doctor Who Christmas special, The Doctor, The Widow & The Wardrobe sees Steven Moffat hit more of the key, with a standalone story in which the timey-wimey unravelling of major plot obstacles is, for once, a bit more manageable. On the other hand, the story feels somewhat smaller, as well as simpler.
Reviews will contain spoilers, so if you haven't seen the episode yet, toddle over to the iPlayer, or watch BBC Three at some point in the next century's worth of repeats.
As with last year's A Christmas Carol, the episode nakedly borrows from a seminal bit of festive literature- C.S. Lewis' The Lion, The Witch & The Wardrobe. That's what it looks like, but it's not the whole picture. During the Second World War, stoic mother and wife Madge Arwell ships out to the countryside with her two children, Cyril and Lily, having recently gotten word that their fighter pilot father, her husband, Reg, has recently gone missing in action over the English Channel. She hasn't had the heart to tell the kids, because of the implications of the season, hoping to give them the best Christmas they've ever had. Happily, she has the Doctor on-side, wishing to repay a debt that he owes her. 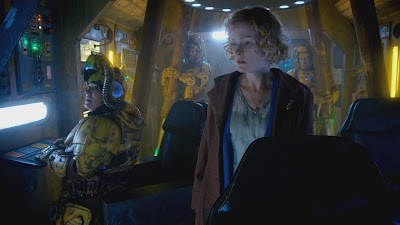 Sure, there's the Doctor, a widow, and the TARDIS is labelled as a wardrobe, for the benefit of Lily. But the inference of Narnia is about 50% in the title alone, after the Doctor takes the family through to a wintry wonderland on another planet. From there, the story is much more ecologically conscious, about a forest that is due to be destroyed by harvesters from Androzani Major, played for laughs by Bill Bailey, Arabella Weir and Paul Bazely. For fans of the older series, that refers to The Caves of Androzani, in which industrial bastards basically destroyed themselves, without the Fifth Doctor having to do anything except be present. Similarly, Matt Smith takes a backseat in this adventure.
It's another of those episodes, like Planet of the Ood, where the Doctor isn't hugely pro-active in winning the day. Unlike either of those aforementioned stories, the festive mood generally puts the onus on humans being quite terrific. Particularly, it has a great and justified affection for mothers, which hasn't been as explicitly played up in other stories with mums as characters. Claire Skinner makes a smart and likeable matriarch as Madge, and, unusually for a one-off Christmas companion, spends a lot of time solving problems without the help of the Doctor. Knowing how Moffat's supporting characters have frequently returned at a later point, in some other plot, I'd have no problems with seeing more of the Arwells.
While you can be certain that brave Reg won't still be missing in action by the time the credits roll, the time-travel wangling to get to that conclusion isn't nearly as complex as usual. But in being simple, it kind of feels like it's a small plot. In Doctor Who, there are no small plots, but comparative to recent episodes, or, crucially, previous Christmas specials, it doesn't feel like as much of an event. I'm at my least critical when viewing these festive specials, because the only real barometer is Christmassy entertainment. For that much, Voyage of the Damned has never been surpassed as a barnstorming disaster movie of the type that get regular airing on Christmas afternoon telly.
Set on an outer-space recreation of the Titanic, and concluding with Kylie Minogue plunging the villain into Hell on a forklift truck, that episode was huge and bombastic. But as massive as it is, it's also incredibly simple, story-wise. The Doctor, The Widow & The Wardrobe is occasionally silly, but mostly just smaller, and thus, it isn't as raucously entertaining as I'd have liked. It kind of feels like the emotive Adventure of the Week format that I missed so much during the last series, but on Christmas night, I personally prefer the bigger, sillier adventures. Still, if the Doctor serves a function for film buffs at Christmas, who've already seen the day's big movie premieres (this year, Ratatouille and Monsters vs. Aliens), it's fulfilling the guarantee of something brand-new to watch, even if it has something old, borrowed and/or blue bubbling away underneath. 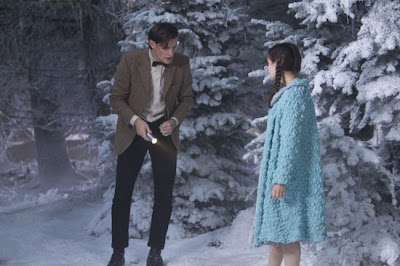 The Doctor, The Widow & The Wardrobe is a more light-hearted episode than the series has seen... well, since last year's Christmas special, but it manages to be funny, and fast, and emotive without being overly manipulative too. Separated from "slutty titles", we can presume that Moffat will continue to write thoughtful and entertaining sci-fi stories for a family audience. This was not the most memorable of the Christmas episodes, but then it's not attempting to be as much of a blockbuster as the title suggests. And all I'm asking, if we're not getting blockbusters, is why the writer of such episodes as Blink hasn't yet turned out something in the way of a spooky and Christmassy ghost story?
--------------------------------------------------------------
I'm turning off the lights in the Zero Room now, until next autumn. Still, I'm writing my Media Studies dissertation, due on January 27th, on the topic of Doctor Who, so I'm sure I'll be keeping my head in the TARDIS in the meantime. Keep leaving comments on the series, or my reviews of it, until I get back!

Doctor Who will return to BBC One and BBC HD next year.