OK then, to hell with the rubbish I was chatting about yesterday. While this post will run down my 25 favourite films of the year, up until the #11 spot, don't think of these as runners up for the top 10 (which will be posted tomorrow), if you can help it. 2011 held plenty of great films, and I wouldn't stretch to 25 favourites if I didn't think so.

As I've explained in the past, this is based on movies released in the UK in 2011- I don't count The King's Speech as a 2009 film, and The Artist (unfortunately) won't be released until 2012. More than that, this isn't an outright meritocratic Best Of list- Tinker Tailor Soldier Spy was one of the year's best films, but I didn't enjoy it enough to place it in my favourites of the year.

So, with the usual caveats that this list is purely based on my own opinions, which should really go without saying anyway, let's start counting down the top 25 movies that I saw in 2011.

This has understandably been seen as a resurgence for Allen as a writer and director, after indulging in bilge like Match Point, of late. Creatively, this hearkens back to films like The Purple Rose of Cairo, but thematically, it's a clever rumination on the topic of nostalgia. Owen Wilson is Allen's modern avatar, and he's unusually likeable in that capacity too. The cast of historical characters really bring the setting to life, particularly Corey Storn, Marion Cotillard and the inspired cameo by Adrien Brody. It's funny, romantic and inventive- Allen firing on all cylinders once more.

Bouncing back from the disappointment of Iron Man 2, Marvel Studios got its second wind on the way to The Avengers with this full-blooded fantasy film. It's essentially a fantasy-inflected fish-out-of-water comedy about Norse gods and their tragic family drama. But it's still got its eye on a young audience, who can enjoy seeing the big bloke smack things with a hammer, than many other more serious superhero movies of late, and for that it's raucously enjoyable.

One of two very recent additions to the list finds a great animation director bringing the larger-than-life sensibilities of The Incredibles to a live-action feature, and also invigorating Tom Cruise's long-running franchise. By putting Cruise in the centre of a team environment, he's actually much more watchable than in previous instalments. Less is more, as it turns out, except for in the superb scale of this action-packed sequel.

Ooh look, the other very recent addition. I could take or leave Ritchie's first Holmes movie, but this sequel has me really hoping that a third instalment is forthcoming. The film delights in bouncing Robert Downey Jr. off of people, and he has solid chemistry with both his best bro, Jude Law, and his mortal enemy, Jared Harris. It's more smartarse than intellectual, but for a Hollywood version of Holmes, it is buckets of fun, and unabashedly entertaining.

Tom Hardy and Nick Nolte give stunning performances in this memorable yet underappreciated sports drama. It deserves the notice it's getting in top 10 lists, and with two underdogs for the price of one, it's surprising it hasn't had more recognition during awards season. Like David O. Russell's The Fighter, it puts just the right amount of weight on its emotional angle- enough to elicit manly tears, but not so far as to manipulate audiences. Plus, Hardy's character rips a door off a tank, which is fucking awesome.

Hey, I liked it before it was cool, OK? It's not the most memorable Best Picture winner ever, or even in recent years, but it is a hugely sympathetic treatment of King George VI's speech impediment, which is just as inspiring as the true story. With one of the year's great bromances, between Colin Firth and Geoffrey Rush, this is a warm and funny film that withstands both the hype and the backlash, to stand out as a perfectly enjoyable film, above and beyond the subjective prestige of its Oscar wins.

Based on the real experiences of screenwriter Will Reiser and co-star Seth Rogen, this film is about as sensitive and as tactful a representation of cancer as you could hope for. Rogen is on career-best form as a best buddy for Joseph Gordon-Levitt's Adam, and both actors are attuned to the film's almost paranormal balance between comedy and drama. It's completely disarming, to the point where you will laugh, and you will cry, and you will be bowled over by this sweet and thoughtful film.

The prolific director's latest limb-lopping opus is deceptively simple, in its structure. The first hour establishes our titular troupe of fighters, and their adversaries, before propelling them into a spectacular hour-long battle sequence. And the transition between the two halves is made by a herd of stampeding cows. Who are on fire. The film is anything but subtle, but it's innovatively shot and choreographed, and the overall effect is one of the most completely satisfying and fun movie experiences of the year- a modern classic of the samurai genre.

#17 We Need To Talk About Kevin (dir. Lynne Ramsey)

I'm always eager to praise innovative aspects of an adaptation, particularly with a film based on a book as popular as Lionel Shriver's We Need To Talk About Kevin. It's more unusual for me to praise an adaptation's perfect preservation of an original aspect of the source material, but in this case, the claustrophobic first-person-ish perspective of Lynne Ramsey's adaptation is one of its most compelling features. Throw in electrifying performances by Tilda Swinton and Ezra Miller, and you're looking at a deeply unsettling film that won't leave your thoughts, or your nightmares, for days afterwards.

Working with the first-person perspective in a vastly different way to Lynne Ramsey, Ayoade's directorial debut tells the tale of Oliver Tate, a thoughtful teenager who pines after an unreadable schoolmate, Jordanna, and tries to fix his parents' ailing marriage. Although it has roots in the French New Wave and more modern mumble-dramas, it is an achingly romantic and terrifically funny film, revolving around a very well-drawn and recognisable character who quibbles endearingly over his own self-importance.

Verbinski's first animated film is possibly his best ever, showing up Pixar in the year that they released a considerably less inventive effort, with Cars 2. It's also the first animated feature produced by the effects wizards at Industrial Light & Magic, which seems odd, especially when they're this good at it. With grotesquely inventive character design and a strong sense of the Western genre, this is a genuine curiosity, released under a studio banner, for your enjoyment and confusion. 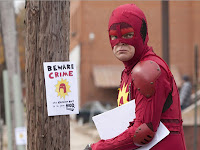 This one initially left me confused as to whether or not I liked it. It's a grimy, lo-fi, high concept satire of superhero films, but that's not a bad thing, and it's grown on me throughout the year. Rainn Wilson is astonishingly good in it, with ample support from a demented Ellen Page and a hilariously laidback but utterly villainous turn by Kevin Bacon. But it has a heart of gold, and a very straightforward approach to the more sanitised exploits of big-screen vigilantes. It's not as much of a crowd-pleaser as its nearest analog, last year's Kick-Ass, but it's much more bonkers and unpredictable.

Making top 10 lists across the board, Drive could be described in many ways. The director says it's a superhero film, and its star Ryan Gosling reckons it's a blood-splattered John Hughes movie. My feeling is that effortlessly cool films such as this don't stand up to such scrutiny, so it helps that the film is also very, very good. From its joyously old-fashioned use of the superb soundtrack, to its shocking and sporadic bursts of violence, Drive is a self-assured and slick action picture that works equally well for both fanboys and thinking men.

In my experience, horror fans seem somewhat jaded when it comes to this excellent Spanish horror, which comes from the same school of storytelling as The Orphanage, and boasts another great performance from its star, Belén Rueda. What made this film so special, in my view, was that the horror plugged into emotional terror, rather than relying on visceral thrills or jump scares. It gets under your eyelids by properly exploring isolation as a theme, rather than as a situation in which something scary might get you. It's a great script, with great characters, and well worth checking out, now that it's available on DVD/Blu-ray.

This blew me away in the same way that the Gareth Edwards film Monsters had everybody raving, this time last year. It is of a similar indie production model, but it also has a better script, and better central performances, from Brit Marling and William Mapother. I also found it much  more engaging than Lars von Trier's similar but facetious film, Melancholia. In a year that had a number of these smaller sci-fi dramas, it's gratifying to see that world-changing sci-fi events are no longer the sole province of big dumb blockbusters. They also form a site in which heartfelt and haunting relationship stories, such as this, can shine through.
------------------------------------------------------------------
The weekend will bring my top 10 films of 2011- spoiler alert, Breaking Dawn Part 1 does not feature. I'm hoping to have it done for tomorrow, so I can post it before the year is out, but you can definitely expect it by Monday.