On balance, 2011 has been a good year for movies, with the average film generally being much better than in previous years. It's not to say that we've had many obviously deserving standouts for the next Oscars ceremony in February, because this is clearly the most open awards season in years. But certainly, there are many very good films, but I'll be posting those in the next few days. Today's order of business is the year's really sucky movies.

I've written up my bottom 10 list for Movie Reviews, and you can find that here, but I'll also give some more analysis and links to my original reviews, after the jump. So, with the Mayans having predicted the coming of the apocalypse within the next 12 months, I've picked out another ten films that might just make you think "You know what? If we survived that, we can survive anything."

It wouldn't be a year with a Michael Bay film if he didn't make it onto my bottom 10, but it did seem like Dark of the Moon wasn't going to make the list, for a while. But it's around this time of year that I start pruning movies that disappointed, rather than annoyed or offended me. The bottom two are the absolute worst offenders for this, with The Change-Up bringing chauvinistic shit into the digital age and Something Borrowed dispensing completely reprehensible bullshit through unlikeable characters and a lampshaded rehash of romcom tropes. I get angry, just remembering either of them.

Tomorrow, I'll dig into my top 25 for the year, up to number 11, and I'll try to post the by-now annual top 10 video on Saturday, so that we're still technically in 2011 when it's all wrapped up. Looking forward to 2012, at the end of this retrospective, I can tell you that the films I'm least looking forward to, next year, are Jack & Jill, American Reunion and Battleship, but we must always keep an open mind. I'm probably just going to swerve seeing Jack & Jill, as part of my New Year's resolution to keep avoiding shit I don't need in my life. 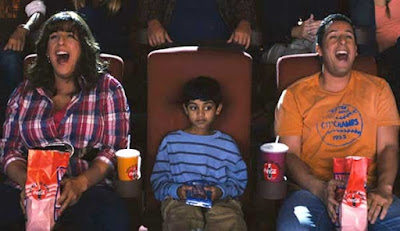 I've been Mark the mad prophet, and until 2012, you can probably cross some of those bottom 10 movies off your list of films to catch up on this year.
Posted by Mark at 09:00