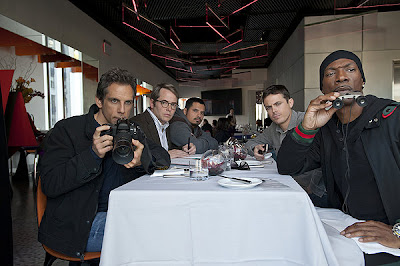 Brett Ratner is one of those directors who is widely considered to be a hack filmmaker. If the studio likes someone that much, he must be bad, right? Aside from driving the X-Men franchise into the first of two successive brick walls when he took over from director Matthew Vaughn at the last minute, he's the mastermind behind the increasingly crap Rush Hour trilogy. In fact, he dropped out of remaking Ocean's Eleven back at the beginning of the Noughties, in order to make Rush Hour 2.

In Tower Heist, Ratner seems to have found a channel through which he can expend any Ocean's-related energy that may still be troubling him. Set in and around a high-rise apartment complex in New York City, Josh Kovacs is a building manager who is stung when the tower's wealthiest resident, Arthur Shaw, is implicated in a Ponzi scheme. Shaw was responsible for the staff's pension fund, which now seems to have disappeared without a trace. When they discover that Shaw keeps an as-yet unseized $20 million emergency fund in his apartment, Kovacs and his motley crew of outraged victims plot to get their own back.

Some seem to be throwing up the comparison to Ocean's Eleven in a derogatory way, as if to say this is the Asylum-brand knock-off equivalent of Steven Soderbergh's film, somehow released in cinemas, a decade late to the party. For me, it's actually  an apt comparison because they have so much more in common than the presence of Casey Affleck amongst their starry ensemble casts. Ocean's Eleven is a very cool, but ultimately superficial film, and while I didn't dislike it, it was largely unmemorable, and pretty functional in the management of its large cast. Similarly, Tower Heist is what it is, and nothing more or less, but I'm not speaking out of diminished expectations when I say that's just fine. 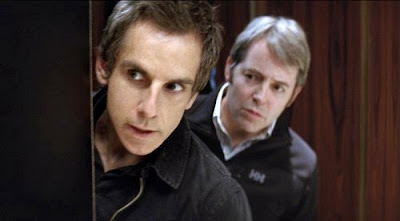 The trailers would seem to brand the film as a very, very broad crime comedy movie, but we all know how trailers can be misleading. While the trailer gives away more of the ending of the plot than many of us would have liked, there's a fair bit that the marketing hasn't given away, in the scenes of our hapless heroes planning out their heist practically. It focuses more on the crime than on the comedy, which mustn't be mistaken for being unfunny. The film is far more chucklesome than laugh-out-loud hilarious, but neither is it going for the rapid-fire approach, and having many of the gags fail to land.

Similarly, the marketing has exaggerated the role of Eddie Murphy. His role as Slide isn't exactly his comeback film, but it signifies that he's going back towards the kind of character he played in the 1980s, sans fat-suits or any of that old bullshit. Trading Places, for instance, had a similarly damning view of Wall Street to Tower Heist. Eddie Murphy is Eddie Murphy though, so I think you know what to expect there, now that you've been warned that his role isn't what the trailers make it seem.

Ben Stiller, on the other hand, isn't merely Ben Stiller, or at least not in one of the two character types for which we know him- his tendency is to play meek and well-meaning, or egotistical and dumb. Kovacs is much closer to a real person than we usually see from Stiller, which helps the otherwise slim characterisation to be more relatable. But the highlights amongst the ensemble are Matthew Broderick, who gives a performance along the lines of his Leo Bloom and got the biggest laughs of the movie from me, and Alan Alda, playing Shaw as the delightful old grandpa we know him as, while saying and doing some pretty despicable things.

Its topical grumblings are neither as pointed nor as richly drawn as those of In Time, but it's a film that should benefit from getting out there at the same time as the ongoing Occupy Wall Street publicity. Ultimately though, that political undercurrent was never meant to subsume the plot or, more importantly, the ensemble. We're getting to the point where financial bods are becoming as much a shorthand for unconscionable evil as Nazis, or zombies. While Alda gives the villain a magnetic presence, don't doubt that Tower Heist is still operating in the same terms as Ratner's usual work, concerned with the occasional big setpiece to keep you diverted. 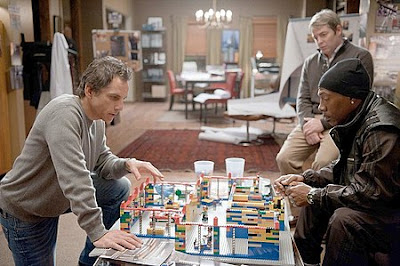 Tower Heist is neither as bad as you'd expect, nor as good as it could have been. Would I recommend seeing it in the cinema? Sure, if you fancy a bit of light, flufy escapism with a chewable topical edge and a cast you know and like. I certainly wouldn't recommend that you pay $60 to watch it on your telly at home but it's entirely diverting, and even though it's not an ambitious comedy in terms of joke volume, it's solidly plotted, taking more time to develop and relate to the characters than you might think. It's safe as houses in its execution, but it's at least more enjoyable than the Ocean's sequels, if not the film that Ratner missed out on making.