Four Of My Favourite Things About TRESPASS 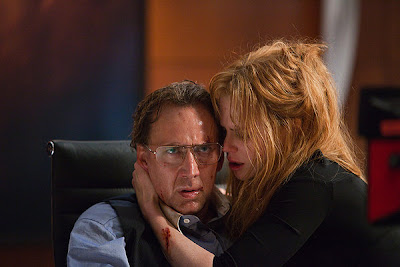 If you want a thought-out and reasoned analysis of Joel Schumacher's Trespass, starring Nicolas Cage and Nicole Kidman, you can read my review over at Movie Reviews now. If you're of the "tl;dr" browsing clan, then who am I to act contrary to the demand for easily digestible and visually friendly movie critiques, especially for a movie as awfully good as Trespass? I mean, it's shit, but there are a host of fun moments.

The plot, as far as it goes, finds a wealthy estate agent and his family under siege at their swanky and fortified mansion. Kyle Miller has recently signed for a million dollars' worth of diamonds, and armed men bust through his security to take him and his wife Sarah hostage. His daughter, Avery, becomes swept up in the hostage situation too, as secrets and lies are revealed, and the whole thing becomes terribly convoluted. Here are my four favourite things about the movie. 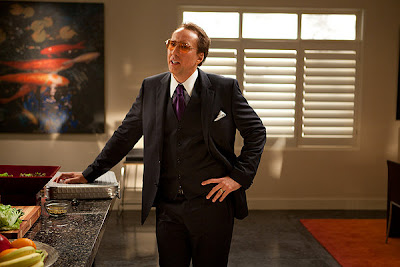 At the arse-end of 2011, we've seen Cage in two films thus far- Season of the Witch and Drive Angry, neither of which boasted his finest or even most explosively enjoyable work as an actor. The latter film was almost completely let down by the fact that he seemed bored, but at least William Fichtner picked up the slack there. Bizarrely, he's really trying in Trespass. We're talking about the kind of acting we haven't seen from Cage since his remake of The Wicker Man. 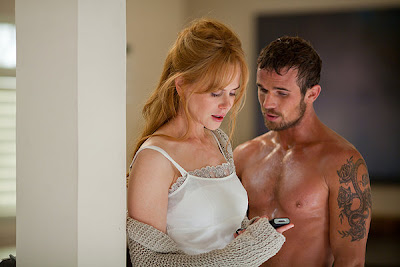 Karl Gajdusek's script for Trespass frequently sounds like it was contrived during a round of Whose Line Is It Anyway? with its frantic doing and undoing of plot twists to keep the thriller aspect afloat. On the surface, it would seem like quite a simple plot- the Millers' electrician brings in his older criminal brother to rob his employers of a fortune. But with every escalating twist, you can almost hear Clive Anderson's buzzer sounding as the power struggle becomes more and more convoluted.

At its very worst, the criminals tell a baffled Kyle that they need to steal a kidney to transplant into their ailing mother. Then five minutes later-- oh wait, no, they're don't! Imagine a succession of such revelations, timed about five minutes apart for around 90 minutes, and you can imagine how the film drove me to the point of actually yelling out "Just fucking end, already!" Ah, the joys of watching a shitty movie in my own home. 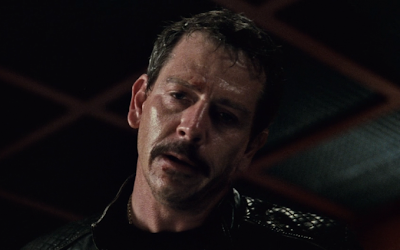 Ben Mendelsohn, who was nothing short of phenomenal as the terrifying Pope Cody in Animal Kingdom, is considerably less impressive when deployed against Nicolas Cage. He already co-starred alongside the man with a thousand hairpieces in Knowing, which was even worse than Trespass. Most unusually though, Trespass finds him fatally afflicted with facial foliage.

Schumacher obviously felt strongly enough about this criminal type wearing facial hair that he even has the character wear a ski mask with a large enough mouth-hole to show off the moustache. And Mendelsohn spends a decent amount of time wearing that ski mask, which only makes his face look more peculiar. In a similar way to my evasion of mentioning Liana Liberato in this review, I like Ben Mendelsohn enough that I don't want to say it's a shit role and he's really not very good in it. The moustache makes a better scapegoat.

Nobody's going to watch it. 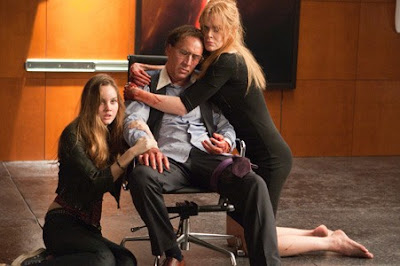 Ultimately, my favourite thing about Trespass is that it went straight-to-DVD in the States, and that it's getting a limited release in the UK. There's negligible buzz around it, and the only real reason I can think of, for a film that has two Oscar-winning actors front-and-centre, with a noted (or notorious) director at the helm, to get such treatment is that the producers know it's shit. And they're cutting their losses, rather than stacking a huge marketing and distribution campaign on it, to try and sell it anyway.

And believe me, it's shit. In the not-so-stellar field of home invasion thriller, this is a real stinker. There are enjoyably awful moments, but many more structural problems that are just plain awful. It's convoluted, illogical, loud, stupid rubbish, and symptomatic of the way that Nicolas Cage can feature in Kick-Ass one year and then appear in one of the year's worst just 12 months later. Stick this on the pile with The Wicker Man and Knowing, but whatever you do, don't seek it out.