TUCKER AND DALE VS. EVIL- Review 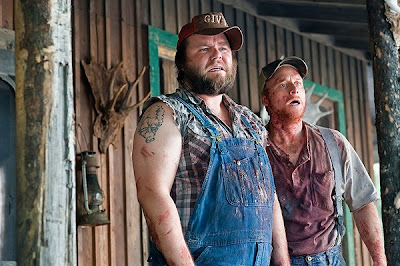 Happy Halloween! This time last year, I was advocating a frightful double bill of the Halloween anthology film Trick 'R' Treat and the bizarre, Snicket-infused scares of Burning Bright, and it's time once again for me to give a shout out to a film you can enjoy watching as October dwindles to a close. As with last year, it's more fun than frightening- a little film called Tucker and Dale vs. Evil.

In the vein of rubbishy mainstream horror films, this is a film in which a group of teens go camping in the woods, and meet grisly fates after encountering a pair of hillbillies in a rundown shack. However, Tucker and Dale vs. Evil actually takes place from the hillbillies' perspective. Tucker and Dale are renovating their holiday home in the woods, when they rescue an unconscious high school student, Allison, from drowning. This leads Chad, the prejudiced dickhead of the group, to mount a full-on rescue attempt, and our heroes are terrified by the sudden onslaught of seemingly suicidal kids. 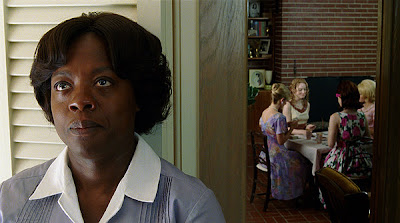 Looking at this week's new releases, Tintin doesn't really have any female characters, to speak of, and in The Ides of March, (review coming next week) Evan Rachel Wood is essentially the only woman involved, and she's a victim. So while it's nice to see a "women's picture" like The Help comes along, it's also nice to see that people have gotten over this year's bout of Bridesmaids syndrome, whereby films are good cos they have women with brains and stuff. Just because mainstream Hollywood is only just realising this, doesn't mean it's anything new. Then again, this film probably broaches race issues more prominently than gender issues.

Based on the bestselling novel by Kathryn Stockett, The Help begins with a budding writer, Skeeter, returning from college to her hometown of Jackson, Mississippi. She's distressed to find that her family's maid, Constantine, has seemingly quit, and even more perturbed to find the white women of Jackson spearheading a movement to make separate toilet arrangements mandatory for black people. Skeeter decides to compile a book of the servants' stories, collaborating with maids Aibileen and Minny to gather interviews about their working conditions.

THE SECRET OF THE UNICORN- Tintin Review 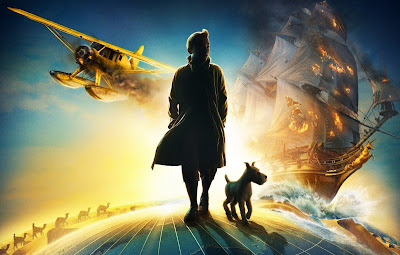 Not for nothing, but I feel it's worth mentioning once again that my favourite film of all time is Raiders of the Lost Ark. Back in 1981, Steven Spielberg discovered the works of Belgian author Hergé, while doing press duties for the first Indiana Jones film, and reading a review that favourably compared the two. Spielberg has been trying to bring Tintin to the big screen ever since, and the result is The Adventures of Tintin- The Secret of the Unicorn.

Like other Spielberg projects I could mention, from this year in particular, the project is a veritable melting pot of creative talents, and so the plot comes from merging three of Hergé's stories. Tintin is a renowned journalist (of indeterminate age) who stumbles into the midst of an ancient feud when he buys a model ship in a Parisian market. The ship is one of three identical models of the Unicorn, which lies on the ocean floor somewhere, packed with sunken treasure. Allying himself with a sozzled old sea-dog, Captain Haddock, Tintin and his dog Snowy are swept into a treasure hunt against the sinister Sakharine.

This review contains SPOILERS. If you haven't seen Paranormal Activity 3 yet, you'll want to wait before reading this. In the meantime, my spoiler-free review can be found over at Movie Reviews. 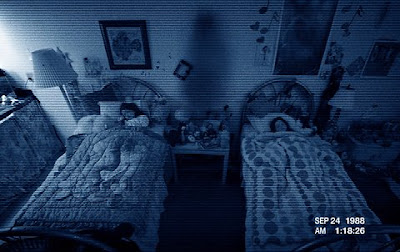 Having really enjoyed Paranormal Activity 2 last Halloween, seeing Paranormal Activity 3 at the cinema, on opening night, was a must for me. But while I found the first two films in the series to be about equal in terms of quality, the advantage of the third instalment isn't merely the experience of seeing it with an audience- it's also really fucking good.

If you started out being scared shitless of the first film, then perhaps this series has a limited shelf-life. But if, like me, you saw room for improvement from the beginning, the imagination necessary to keep the ball rolling on this series is actually what makes the whole endeavour worthwhile. After the cliffhanger ending of part 2's parallel prequel, Paranormal Activity 3 is a fully-fledged flashback to the childhood of sisters Katie and Kristi, filling in backstory that enlightens the demonic activity previously seen. Specifically, it seems to centre around Kristi's imaginary friend, Toby...

BlogalongaBond- THE SPY WHO LOVED ME Review 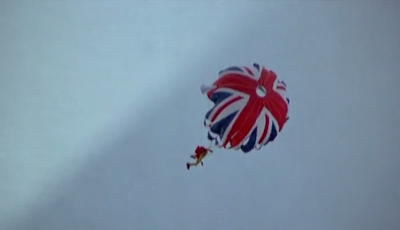 "Blimey, that fall goes on for longer than I remembered." That was one of the first thoughts I had, after watching the excellent pre-credits sequence from The Spy Who Loved Me. It culminates with stuntman Rick Sylvester leaping off a cliff, into film history, and the often praised Union Jack parachute reveal. It cements the sequence as the best opener of the entire series, and it's immediately followed by the series' very best theme song.

After the surreal shittiness of The Man With The Golden Gun, this one comes as a breath of fresh air, and possibly the peak of Moore's tenure as Bond. Unusually, the insane plot of the film's villain, Stromberg, is actually the backdrop for a story about espionage. An entente between MI6 and the KGB is formed when a submarine tracking system is put on the market, and James Bond is paired with Anya Amasova, whose lover, one of her colleagues in the service, has recently been killed in action. Three guesses which British agent killed him? 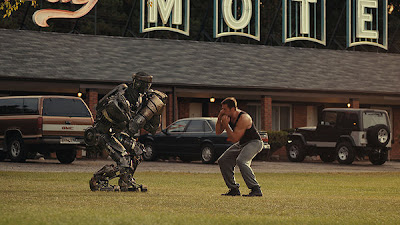 Why should the necessity for commercial, blockbuster films, packed with product placement and "toyetic" characters, get in the way of making a good movie? Surprisingly, that question is answered by Real Steel, a film that is essentially a formulaic sports movie about family and robots hitting each other, which still manages to be both entertaining and winsome.

The sci-fi inflection involves robot boxing, of the variety once seen on Futurama. As the lucrative promotion business transfers its money from human boxing to mechanoids, boxers like Charlie Kenton become obsolete. And so, Charlie wanders America in a van, piling up astronomical debts as a rubbish robot operator. When an ex-girlfriend passes away, and the son he has never met is placed into his custody, Charlie sells the kid, Max, to his in-laws, and grudgingly agrees to look after him until the end of the summer. The pair eventually bond over an interest in robot boxing, and Atom, a sparring robot that they restore together. 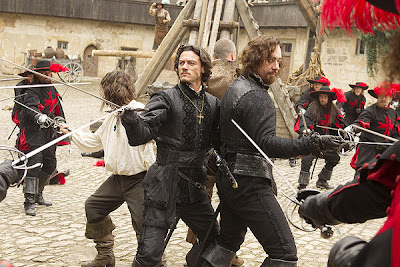 One of the most memorable articles I've seen on Cracked is a speculative look at what it might be like if Michael Bay adapted The Great Gatsby into a movie. And as it turns out, Fitzgerald's novel is coming to the screen in the only slightly less ludicrous form of a 3D Baz Luhrmann version next year. But a juxtaposition that's just as ludicrous as Bay tackling Gatsby, is appointing Paul W.S. Anderson, hack director of the Resident Evil movies and Alien vs. Predator, to adapt Alexandre Dumas' The Three Musketeers.

Desperate to mimic Pirates of the Caribbean with a grand sense of adventure and a bombastic score, the film winds up unintentionally closer to Blackadder, with illogical steampunk additions, like airships and booby traps. However, the plot is more faithful to the novel than, say, the 1993 Disney version. D'Artagnan comes to Paris from a small town, raised on tales of the King's Musketeers. Upon his arrival, he encounters Athos, Porthos and Aramis, and becomes involved with saving France from the dastardly warmongering of Cardinal Richelieu.

DON'T BE AFRAID OF THE DARK- Review 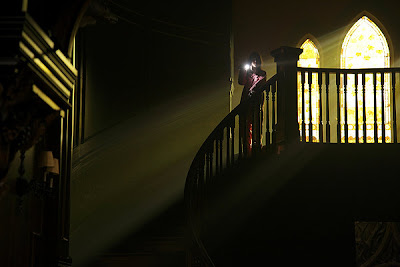 Since hitching himself to runaway, studio-worrying properties such as The Hobbit and At The Mountains Of Madness, Guillermo Del Toro hasn't been in the director's chair for a while. His first film since 2008's Hellboy II- The Golden Army is Pacific Rim, which isn't due out for another couple of years, but he remains one of the most consistently hard-working filmmakers today, just for the sheer volume of projects he's attached to in some way or another.

Amongst his numerous horror movie projects, he provided the screenplay for Don't Be Afraid Of The Dark, a remake of a 1970s TV movie that has a cult following, and an outspoken appreciation from directors of a certain age, including del Toro himself. The film is about Sally, a young girl who goes to live with her estranged dad and his new girlfriend in a house that the couple are restoring. The discovery of a hidden basement unleashes a whole bunch of mythical creatures that have been languishing in a sealed fireplace, and they want Sally all to themselves. 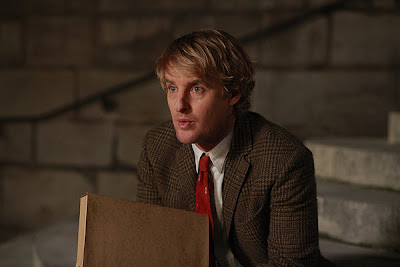 Woody Allen is one of those filmmakers whose shape forms an embarrassing gap in my cinematic knowledge. I'm 21 years old- I've just not been into good movies long enough to have caught up on every single one. What I can tell you is that Midnight in Paris is Allen's first new movie in a while where the premise hasn't put me off making an effort to see it. Of his recent oeuvre, I've caught Match Point (urgh) and Vicky Cristina Barcelona (eh), both by accident.

Happily, Midnight in Paris lives up to its high concept premise and is plenty of fun to boot. Screenwriting hack Gil Pender is on holiday in Paris with his fiancee, Inez, and her Republican parents, battling their maddening indifference to the beauty of the city in order to try and enjoy it himself. Gil lacks confidence in his breakaway project, a novel about a nostalgia shop. But when the witching hour arrives, Gil is picked up by an old-timey car that whisks him away to the Paris of the 1920s, populated by legendary celebrities of art and literature.

The Zero Room #11- Back To The Shadows 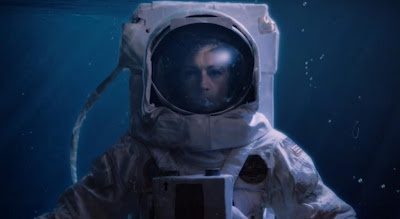 The end of Doctor Who's sixth series played out in a way that is now typical of Steven Moffat's run as head writer, which is to say, it was unabashedly un-typical. But before The Wedding of River Song, Toby Whithouse turned in a Shining-inflected chiller, The God Complex and Gareth Roberts brought the series back to terra firma with a sequel to his Series 5 story, Closing Time.
Reviews will contain spoilers, so if you haven't seen the episodes yet, toddle over to the iPlayer, or watch BBC Three at some point in the next century's worth of repeats.
Read more »
Posted by Mark at 09:00 No comments: 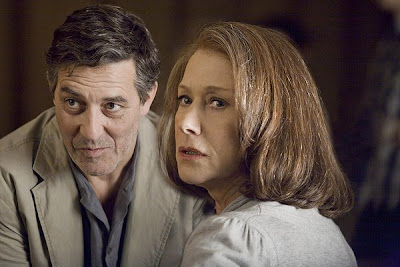 The script for The Debt comes from writers who've written scripts with similar themes to this film, but scripts that are completely different from one another. The dynamic duo of Matthew Vaughn and Jane Goldman, who brought Erik Lensherr's Nazi-hunting pursuits to the screen in X-Men: First Class, are credited, but so is Peter Straughan, who wrote the new adaptation of Tinker Tailor Soldier Spy, with all of its classy espionage suspense.And on top of being an adaptation of previous material, this film also extrapolates the best parts of each.

Set in 1997, the daughter of former Mossad agent Rachel Singer is releasing a book about her mother's famous mission, during which she captured and killed Dieter Vogel, a Nazi war criminal known as "the Surgeon of Birkenau". Along with her two colleagues, Rachel was praised as a hero. But all these years, the three agents have been keeping a terrible secret, and as the film unfolds, the real events that took place in 1966 makes the truth of their situation apparent, and crucial to their later lives too. 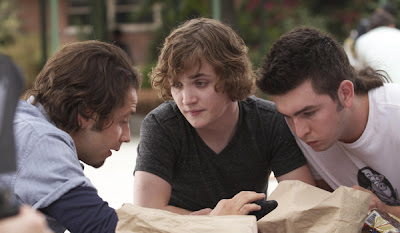 None of the critical brou-ha-ha surrounding Kevin Smith and Red State is anywhere near as interesting as the film itself, and so I'll waste no time recounting it. Red State is nominally a horror film, but it's also more complex than it appears in the trailers. Either way, for a director who's primarily known for Jay and Silent Bob, and the "View Askewniverse", it's a marked change of pace.