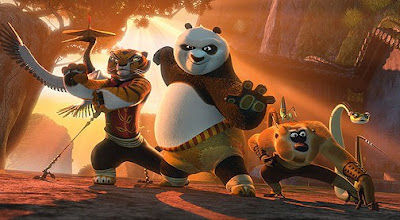 To some, it may appear that Pixar is leaving the field clear for Best Animated Feature at next year's Oscars by releasing this summer's Cars 2. And if it weren't for Rango, I'd argue that Kung Fu Panda 2 was Dreamworks' best shot at snatching mainstream animation's top prize since... well, How to Train Your Dragon. So bravo to Dreamworks Animation, who really suddenly seem to have gotten a lot better at what they do.

Picking up some time after the events of the surprisingly entertaining Kung Fu Panda, this sequel begins with big cuddly Dragon Warrior Po, and his comrades in kung fu, the Furious Five, watching over a long period of peace and harmony in their valley. Then a grave warning comes about the revenge of Lord Shen, a vain and arrogant peacock who has invented a weapon capable of ending kung fu. Shen has a grudge against all of China, and a fear of the black and white warrior prophesied to defeat him.

I reacted with incredulity back in December, when it was announced that Dreamworks had a spreadsheet of box office figures demanding a plan to make a disproportionate number of sequels to existing properties. Overall, there are six Kung Fu Panda films planned. With four Shrek outings behind them, I didn't have much reason to think that there was enough to flesh out five more stories about Jack Black's buffoonish Butt Monkey, seeing as how the first film had him achieve his destiny and all. 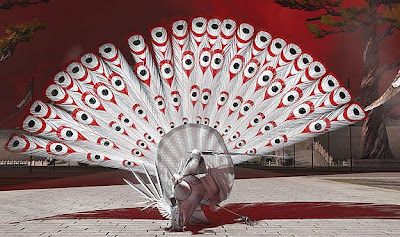 To look at Shrek 2, which is by far the most enjoyable of those jolly green sequels, it's essentially a story about what happens after the happily ever after, in which Shrek suddenly has body insecurity issues. This after the first film concluded by telling us that true beauty lies within. Those sequels only got more insipid from there, but the clear difference between Shrek 2 and Kung Fu Panda 2 is that there's some actual character development at work.

As with the first film, there's a delicate balance at work between the action, the comedy and the characters, made all the more impressive this time around by the addition of a fourth variable; pathos. In a totally unexpected move for the studio that until very recently was synonymous with smug animals and pop culture references, they've fleshed out Po with a back story that becomes the main theme of the sequel. It's that balance I was just talking about that's making you think I'm talking out of my arse about a simple kids' film.

It turns out that the reason for pandas being endangered in the KFP continuity is that our villain Lord Shen, who's given delicious malice by the voice of Gary Oldman, administered a Herodian (or Voldemortesque) genocide of pandas at the word of a soothsaying goat. In a struggle for inner peace, Po is troubled by traumatic visions of being carried away from the carnage by his parents as a baby, who then fell to the massacre themselves. 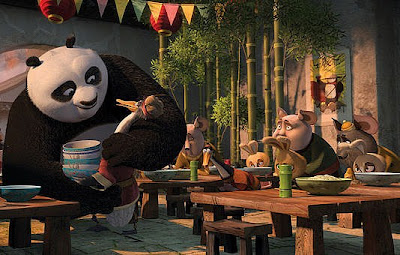 You may ask, what's Shen's threat to kung fu? He has a nifty collection of cannons, working in a nice little historical footnote about how the discovery of gunpowder and its applications effectively end hand-to-hand combat. You can't beat up fire, or bullets, or explosions, and ultimately, Po's way of life seems to get in the way of progress. This dark territory, and that of the big panda massacre, is tempered by the comedy, which comes from one of the better jokes in the first film. Apparently, nobody's ever questioned that Po's father, a noodle-happy goose, sired a panda, and when the truth comes out, it's time for some ass-whupping.

Character, pathos, comedy, action. See how that balance works? You should really watch it and see, because it's just a really fun experience. The character stuff and the genuinely moving flashback scenes served to reassure me that there's enough in this for a few more outings. But the comedy is still well-judged and very funny, and the action has only improved since the amazing sequences from the first film. It's the action that best sets the film apart from the competition, and the continuing balance means that the film serves almost as an entry-level helping of martial arts cinema to its young audience.

That much explains why Jackie Chan would return to lend his voice once again as Monkey, a character who still only has about three or four lines. Of course Dreamworks' star-hoarding is still in full stream, and it only really makes sense with Jack Black. I haven't forgiven him for Gulliver's Travels, but Po is just an animated distillation of the stuff I actually like about Black as a comedic actor. Dustin Hoffman, Gary Oldman and Seth Rogen are emotive in their vocal performances too, but I'm still bewildered by the need to give Angelina Jolie another presumably massive pay-packet for voicing Tigress. 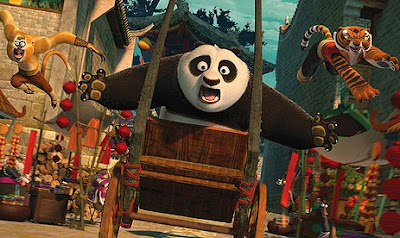 Kung Fu Panda 2 is a sublimely balanced film, with so much of that inner peace that Po strives to find that Dreamworks can be totally content with themselves. For this is the perfect balance between their excesses and the things they previously failed to achieve. It's a sequel, with huge commercial value and a big-name voice cast, but one which also boasts a stunning technical aptitude and a great story. As long as that balance is in place, they can make as many of these things as they like.