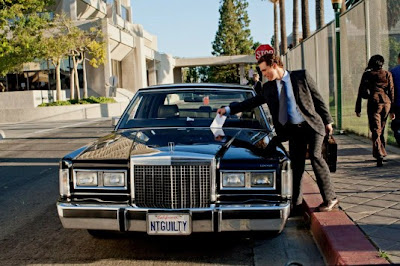 Most cineastes would probably confess to having a slightly troubled relationship with Matthew McConaughey and the films he makes. His filmography includes leading roles in such stinkers as Sahara, Fool's Gold and Failure to Launch. The Lincoln Lawyer marks the first time in living memory that I have enjoyed McConaughey in a movie.

He plays Mick Haller, a lawyer who has recently regained his licence and operates from his mobile office, a chauffeured Lincoln. He's used to representing guilty clients, and with his easy charisma and fast-spoken know-how, he has become very very good at getting them acquitted in court. He encounters something of a crisis when he is retained by Louis Roulet, a rich estate agent who is facing charges of attempting to murder a prostitute and insists upon his innocence even in spite of the privilege of lawyer-client confidentiality. Louis is not what he seems, and for once, Haller might be in over his head.

It's been said elsewhere, but I'll say it again here- The Lincoln Lawyer plays out like a TV legal drama. I don't say it as a bad thing, as you can't help but be reminded of the current standard of American TV drama by the ceaseless Sky Atlantic ads. For me, the difficulty of legal dramas on the big screen, unless your legal drama happens to be A Few Good Men, To Kill A Mockingbird or A Matter of Life and Death, is that it often amounts to quite a predictable narrative.

As we saw most recently in the final part of the Millennium trilogy, in which we sat around waiting for Lisbeth Salander to prove her innocence when we knew she was innocent and we knew that there was a vital piece of evidence that would go a long way towards proving this if the defence would only whip it out and show the judge. Here, the inverse is true with Ryan Phillippe's dastardly portrayal of Roulet- we always kind of know he's guilty. 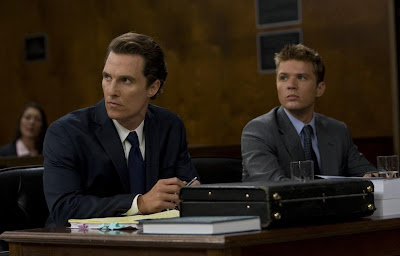 As the extent of Roulet's villainy is played out, there's not a lot to Phillippe's performance. Admirably, he doesn't ham it up- he's far too good an actor for that. But at the same time, there's a lack of interest on his part that has nothing to do with restraint. He never seems that threatening even in his more depraved moments. Haller is a more interesting character, and McConaughey plays him pretty well. At some points, he looks really kind of gaunt as his character's plight worsens. Never mind how his being gaunt looks approximate to an orange Christian Bale- kudos should be given for a muscular performance that, for once, has nothing to do with taking his shirt off.

The trouble is that amongst the procedural goings-on between Haller and Roulet, we also have turns by William H. Macy, Marisa Tomei, Bryan Cranston, John Leguizamo, Michael Peña, Michael Paré and Josh Lucas. None of them are given much of anything to do, and the characters are established with broad strokes from the outset and then given very little in the way of development from there on out. With Josh Lucas, I can kind of understand, because he's kind of like the non-regional McConaughey, and in his scenes as the prosecutor in Haller's case, he gets up in the orange one's face and I worried we were about to see the film explode from the Blinovitch Limitation Effect.

But with William H. Macy and the rest, there's really no excuse. The misuse of those talents is why I liken it to an episode of a television procedural show. They're full of disposable characters, because the guest cast rotates from one week to the next. Occasionally there's a regular supporting cast, but it's a weird approach to making the film more cinematic, by casting big talents in the roles regularly taken up by supporting artistes on the TV equivalent. Happily, director Brad Furman has more up his sleeve than just that, and it's a very handsome looking film, the visual qualities of which elevate it above CSI: Wherever. 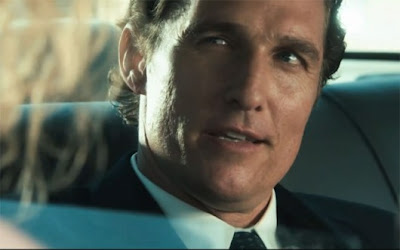 The story may be slim, and the cast underused, but there's a lot to be said in favour of The Lincoln Lawyer. It is a film for adults, and not the mid-teen audience that has so long been Matthew McConaughey's bread and butter, and without any pre-disposal towards legal dramas as a genre, I have to say that it engaged me very much, for the most part. If the leading man can make more films like this from now on, and less films like Ghosts of Girlfriends Past, this performance shows his potential for really, properly good performances.

I agree that the big talents are being underused here.
At the end I though Marisa Tomei’s character was going to save the court room like she did in My Cousin Vinny. I was waiting for her.