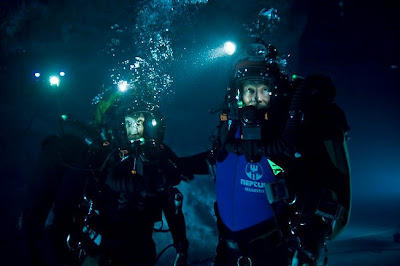 As discussed on this blog and on my weekly radio show, true stories invariably fill up UK multiplexes in January and February, usually because of the distributing run-over from the dying days of the previous year- i.e. The King's Speech, Black Swan and The Fighter, which were all released Stateside in 2010.

January and February in the States then, tend to be a dumping ground for less attractive cinematic propositions, which, typically, get a simultaneous release in the UK. See The Green Hornet or The Mechanic, for instance. However, what you have in the James Cameron produced thriller-stroke-drama Sanctum, is a crossover between both- a horrific journey through an uncharted cave system, in which a motley crew of adventurers are trapped when it begins to flood.

Here was me thinking that the whole point of nu-3D was to add depth to an image. That's what the industry hobnobs say, with complete disregard for all that black-and-white old-timey stuff that Orson Welles was doing all the way back when Citizen Kane was made. But now this one comes around, and as the premise would suggest, the setting is meant to be claustrophobic. That is the main source of tension- this is after all, a thriller. Therefore, the 3D doesn't work, in precisely the same way as Buried wouldn't have worked if it were in 3D.

Namely, we're supposed to believe that our heroes can't fit through this tiny squeeze between hulking masses of rock, all while underwater and running out of air. But if 3D puts you there, in the film, then there's obviously enough room for you, and for a whole room full of cinemagoers. It's facetious to judge a film on 3D's terms, but I think it illustrates a point that needed to be made, post-Avatar. Just because James Cameron is a better filmmaker than almost everyone else using 3D, it doesn't mean he can make 3D any better than it actually is. 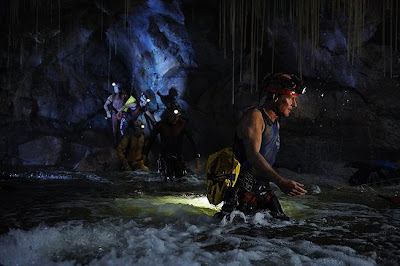 On the film's own terms, Sanctum plays out in a pretty generic fashion. The screenplay had two writers, Andrew Wight and John Garvin. Wight actually had the near-death experience that formed the "true story" this film is based on, and Garvin is also credited as an actor and a "dive coordinator". I can't tell you who it was, but either one or both of them conflated this thing to the most derivative story imaginable. Broad archetypes go into the cave, and the deeper they go, the more staid and over-familiar they become.

Richard Roxburgh breaks type, in a way, by playing the gruff cave-diving veteran Frank, but there's a weird thing about the way his character plays into things. Although James Cameron ostensibly just produced this thing, the script is full of tics like characters explaining things over and over again. How that manifests itself is usually via everyone ignoring Frank's advice. And whenever that happens, the death toll goes up. It's like a super big-budget and decidedly more soggy version of one of those grisly public information films that went out in Britain during the 1970s.

So I suppose if you're paying enough attention, you'll at least figure out what not to do when you go into the world's deepest uncharted cave system to explore, and end up getting stranded in a hole that's slowly filling up with water. That would be some comfort if I ever had the inclination to go diving. And yet I still have much more common sense than many of the supposedly experienced adventurers who resolutely ignore Frank- it's particularly annoying with Ioan Grufford's billionaire wussy and Alice Parkinson, his girlfriend. Don't forget though, we're told it's a true story before the film even starts, so at least one of these people is getting out of there. 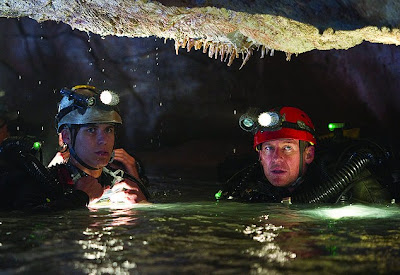 Whatever appeal Sanctum is meant to have, it's been so vaguely represented in the trailers that if you're actually looking forward to seeing it on the basis of those trailers, I imagine you'll enjoy it. In all honesty, James Cameron himself has done more to promote the film by joining Twitter recently, and I've been enjoying his feed much more than I enjoyed this film. With low expectations, I was neither disappointed nor surprised, but it did at least keep me awake and engaged in what was going on, no matter how predictable. There are moments of screaming claustrophobic tension, but these are far too sparse for the premise.

Ultimately, the 3D is an albatross around the film's neck, keeping the film submerged in gloom, when it could have soared to terrifying heights.