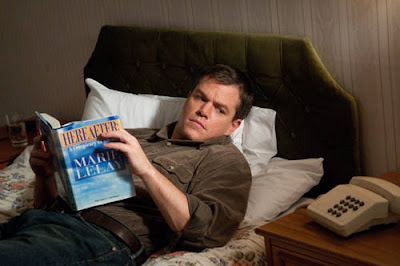 Clint Eastwood's perpetual motion mode of direction couldn't hold out forever. And sadly, we get a less than good effort from the great man with his latest film, Hereafter, a u-turn into the territory that M. Night Shyamalan has marked as his own in the same way as territory is usually marked- by pissing on it. Even in disappointing though, Eastwood is able to surprise by doing something outside of his comfort zone.

Essentially, it's a supernatural drama, in which respected French journalist Marie has a near-death experience and thus finds herself able to commune with what lies hereafter. Meanwhile, in London, a young boy who loses his twin becomes entranced by the idea of where his brother has gone. And in New York, lonely warehouse worker is all too familiar with these matters. He's a retired psychic who wants no part in his own powers anymore, but whether he likes it or not, three people from across the world are about to collide.

Much like the interweaving stories at work, the point at which Hereafter absolutely loses its shit can be very clearly delineated. Basically, the film stops for the most bizarrely specific bit of product placement I have ever seen in a film. The point at which the three stories coincide is the London Book Fair, where Derek Jacobi is signing audiobooks of Charles Dickens' "Little Dorritt". Derek Jacobi stars as himself, and he reads a bit of the book to his audience before having a discussion about how great the CD is with Matt Damon's George. It's as if the whole film stops for an entirely irrelevant advert.

Why mention it so prominently? Because it's what stuck with me after seeing it! In all fairness, I caught this screening right after the horrible time I had with Barney's Version, but that just meant I was all the more ready to enjoy a film directed by Clint Eastwood. And produced by Steven Spielberg. And written by Peter Morgan. Cripes, how did this go so wrong? In this respect, it can be compared to The Tourist, in which a perfect storm of talent just left everyone feeling thunderous and annoyed. 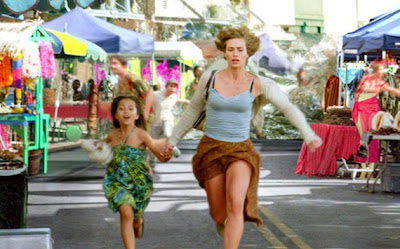 It's obviously better than The Tourist, and it clearly has some great parts that are almost worth the price of admission. The opening sequence, for instance, is dazzling. A tsunami hits Thailand in a scene that could never and has never have been done as personally by a hack like Michael Bay or Roland Emmerich, who have scenes like this ten a penny in their dreck. However, it's unlike any other sequence Eastwood has ever directed, and it's the most promising start possible, integrating the impressive special effects with real human drama in amongst the chaos.

Likewise, I found myself enjoying Matt Damon's performance as George, and there was some mileage to be had from his inability to make physical contact without his brain wandering off to the afterlife. The trouble is that his character arc is spread too thin, even with the other two storylines going on in the background. Everything feels stretched out, and yet we eventually close at a point that feels like the beginning of a more interesting journey for each of our protagonists.

As the film's settled, I appreciate that Eastwood and Morgan were clever enough to end the film with optimism for its characters' futures, and not at the end of their lives, despite the rest of the film being fixated on what happens after people die. The rest of the film is oddly pessimistic too- it may be very spiritual, but its secular approach is less inclusive than it is vague. You can complain all you like about the afterlife as depicted by Peter Jackson in The Lovely Bones being too happy and sunny, but the grey and intangible masses we see in Hereafter just seem unpleasant. It seems like you die and go to a big waiting room with standing room only, while Matt Damon and Cecile de France pester you for messages from the mortal realm. 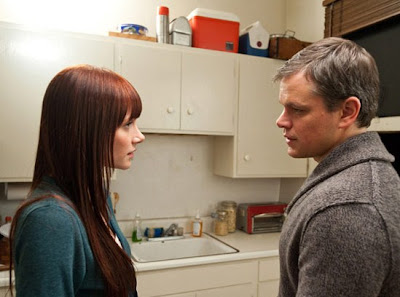 Hereafter might be Clint Eastwood's weakest film for a long time, but that's still a damn sight better than anything M. Night Shyamalan, the most notable resident of this sub-genre, has to offer. It's a departure for Eastwood in almost every way, and there are shining moments in which he manages to pull it off very well, such as the incredible opening. The script is just too vague, and the message too ephemeral, and the appearance of Derek Jacobi to plug his CD just too damn odd- it becomes just a little arduous. Eastwood fans will still enjoy seeing the man at work, even if it's not great. His next one will probably be better, mind.

I respect your views, but I disagree. I liked this movie because it was a very personal experience. Of course it isn't one of Clint Eastwood's best, but it's still a good film. It seems that no one is able to appreciate such vague but reflective themes as life and death, anymore.

Nice review, Mark. Loving the Derek Jacobi frustration. "WTF are you doing here, old man! Leave this place, and take your rotten audio book with you!" Keep it up man!