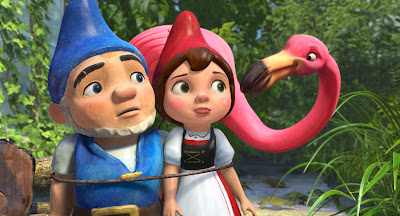 As high concepts go, a retelling of a Shakespearean tragedy with garden ornaments is going to take the gold for this week's new releases. Still, with the next big 3D pop star pet project coming next week, I'd estimate that Elton John has done far better for his involvement in Gnomeo & Juliet than that fucking Bieber monster thing will do with his premature biopic.

The story, for the uninitiated, involves the romance of two starstruck lovers- in this case, the intrepid blue-hatted Gnomeo and the curious red-hatted Juliet, who live in adjoining gardens owned by a Mrs. Capulet and a Mr. Montague respectively. The two neighbours quarrel, and so the gnomes and ornaments in each garden follow suit, feuding over who has the best garden and indulging in the occasional high-speed lawnmower race. As a narrator gnome establishes in the opening scene, "this is a story that has been told before, many times, and we're going to tell it again, but different."

All of my problems with Dreamworks Animation lie within their inconsistency. The pop culture references could be a lot more bearable if focused on a recurring theme, as with the medieval branding in Shrek 2. Their soundtracks, usually sourced from wildly eclectic but still recognisable songs, might sell CDs but doesn't suit the tone of the movie. This is why Dreamworks' only truly good films since the first Shrek are How to Train Your Dragon and Kung Fu Panda. In Gnomeo & Juliet, we have a no-brand animated film that keeps consistency in both its musical choices and its irreverent referencing, while carrying right on with being absolutely crackers. 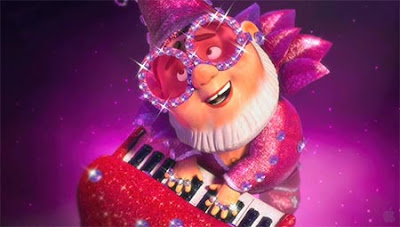 In terms of the soundtrack, executive producer Elton John's back-catalogue accompanies much of the action, and yet doesn't stretch the film to the Herculean efforts of synchronising music as seen in Mamma Mia! and the like. And the visual references are largely Shakespearean, culminating in a fourth wall-crawling setpiece where the relative merits of a tragic ending are discussed in advance of this adaptation's ending. In the case of the references, it's the first indicator that the film is something more than I could have reasonably expected.

It's no masterpiece, and it's certainly not above borrowing certain story beats from other, more popular animated films. Most flagrantly, an apparently emotional sequence midway through the film has diminished impact when you remember a very similar and more memorable sequence from Toy Story 2. Also from Toy Story, we get the idea that these characters are inanimate objects that come to life.

That makes them very breakable, and this imbues the entire film with a bizarre sense of jeopardy that's lacking in certain other animated family films. You may assume that this won't end in the same way as the source material, but a niggling doubt may manifest itself as the film goes on. It's presumably this eccentricity, uniquely British, that attracted the starry cast of British talent. While James McAvoy and Emily Blunt are competent but fairly interchangeable with other bright young stars, there's some nice work from Michael Caine, Matt Lucas and Ashley Jensen. Oh, and Jason Statham playing a gnome is everything I ever hoped it would be. 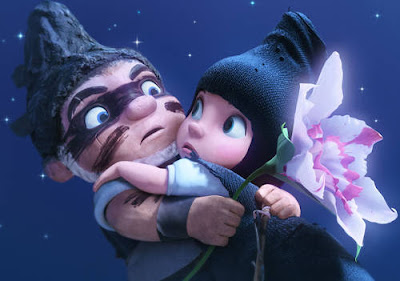 Gnomeo & Juliet wound up being a lot more fun than I had expected- a cheerful little curiosity with more invention and imagination than you'd know from just glancing at it. I'm sure it will be overshadowed by Tangled and (God forbid) Yogi Bear during the half-term scramble by parents looking to keep their young'uns entertained, but it's worth a watch. It's camp and colourful, which makes it better suited to 2D than to the dimmed and darkened 3D, which just gets more boring with every successive release. It's not always predictable, and for the most part, it kept a smile on my face too.