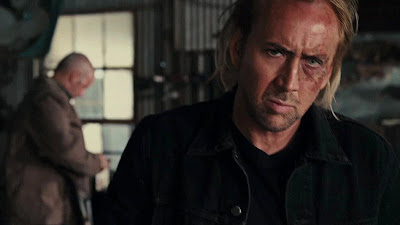 Last Friday, we figured out that there is no type of bad movie that I hate more than a bad comedy movie. And today, we rediscover the fact that there is nothing in cinema that disappoints me more than when Nicolas Cage just doesn't put the effort in. And in a trashy grindhouse flick like Drive Angry, when everyone else is doing their best, that's just sad.

Cage dons another of his famous wonky hairpieces to play Milton, a dearly departed soul who has broken out of Hell itself on a mission. Cult leader Jonah King and his followers murdered Milton's daughter, and plan to sacrifice her orphaned baby to Satan. So Milton arrives back in the mortal realm, recruits pissed-off waitress Piper and blazes a trail of destruction as he goes after King, for his granddaughter and for his revenge.

The plot is the kind of thing that usually makes for a better trailer than a whole feature film, as was the case with the recent Machete. And it's the kind of thing that really requires a crazy bastard like Nicolas Cage to actually invest in projecting something for the audience to enjoy. There's a case to be made that he's effortlessly cool. I don't know about you, but I found his turn in Drive Angry to be merely effortless.

Luckily, there's a guy on hand who is effortlessly cool, and frankly, he's everything you want Cage to be in this movie. He's William Fichtner, and he plays Satan's right hand man, the Accountant, who's sent after Milton after he breaks free from damnation. Fichtner is a long-serving fixture from various action movies over the years, and he's more than able to give it all he's got in a larger role like this one, elevating the film in times when it seems like Cage didn't really want to be there. He makes this movie. 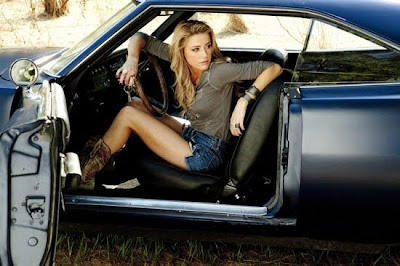 Likewise, I enjoyed Billy Burke's histrionics as Jonah King- if you're wondering where you might know Burke from after seeing him in the trailers, he's Bella's dad off of Twilight. He breaks out of that more well-known character very well as the over-the-top villain of the piece here. It would also be remiss of me to overlook Amber Heard, who's doing a great job with the least of roles. Piper is another of those strong females who you wish could break the fourth wall and kick the cameraman's arse, as any strong female would in reality, if a guy followed her around leching over her good parts with a camera.

We've been into this murky territory before with me bitching about the alleged appeal of Megan Fox in the Transformers movies, and it follows here that Piper is into cars in a big way. My contention here is that Heard is not only much more attractive, but doing a much better performance, giving it her all in a way that most objectified bimbos in action films can't muster. She's the biggest thing on the poster for Drive Angry, obscuring a bored Cage, so it's a shame that the filmmakers were happier to use her looks to market the film than to use her name. Hopefully, she'll get some fame out of this and get some better roles, but I don't think that's how Hollywood works.

Wow, that's more than I would ever have expected to write about the actors in a film called Drive Angry, but what else am I going to talk about? The 3D? In this instance, I suspect the cinema messed up the projection, because despite all of the marketing trumpeting the fact that the film was "Shot In 3D", it looked like the worst of conversions. Lots of ghosting, which got very annoying, and as I haven't heard these complaints anywhere else, I imagine it's the cinema's fault. It demonstrates that multiplexes are making a killing by charging a premium for shoddy 3D, but should it entirely reflect upon the film itself?

Director Patrick Lussier had one of the first Real-D 3D films out of the gate in 2009, with My Bloody Valentine, so he's developed a box of tricks that he uses to full effect here, continuously chucking things at the audience as he did in his previous film. It's a small shame that he dips into Shoot 'Em Up's toolbox too by ripping off that film's raucous sexfight. More pertinently however, he goes back to the same well as Rodriguez and Tarantino have done with their own grindhouse throwbacks, and doesn't end up with a bucket of shitwater. It does have a mild odour to it though- I'd recommend you boil it before drinking it down. 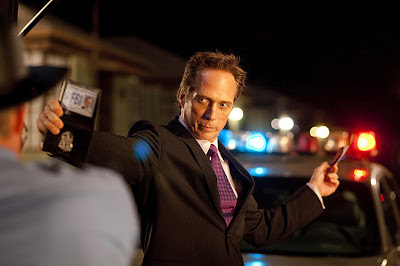 It's a requirement of viewing that you know what you're getting into with Drive Angry, not only in terms of the goofy and old-fashioned plot and the prehistoric attitude to women, but also so that you're not too disappointed when you see Nicolas Cage sleepwalking through it. Amber Heard struggles against the casual misogyny to prove herself as a likeable action heroine, and William Fichtner just owns the entire film whenever he steps on screen. There's already talk of a sequel to this film, but what we really need to see is a spin-off for his character. This one was enjoyable enough, but more of the same would try my patience.

I like crazy cage but I almost threw up when I saw this movie.lol! The body count was stacked to the rafters of the theater!But that was ok because there was plenty of room in the theater due to 3ticket sales total.Drive Stupid I think is a better name for this movie folks!