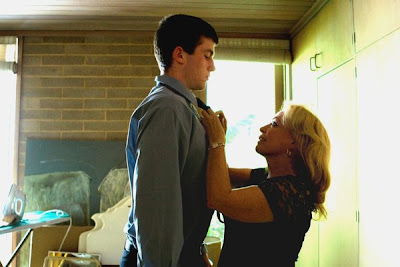 I have a confusing relationship with crime films. While I can always appreciate the technical achievement of the Godfather trilogy or Goodfellas, they can often leave me cold if there aren't any relatable characters. I think In Bruges is brilliant, but DePalma's Scarface is an overlong and over-hyped mess of a film that (I'll say it again) ruined Al Pacino. And that part's got nothing to do with the crime part.

A crime film that's been hoovering up acclaim for over a year ahead of its UK release this Friday is Animal Kingdom. Set in Melbourne, we follow a family of armed robbers called the Codys, as they effectively go to war with the police. J Cody is a teenager whose mother overdoses on heroin right in front of him, and so he's sent to live with his grandmother and his uncles. J shortly becomes embroiled in the escalating feud between his family and the police, and finds his life may depend on where his loyalties lie.

Maybe my difficult relationship with the genre is the reason why it's taken me so long to actually put down my review. Happily, it doesn't glamourise crime, not by any stretch of the imagination, and for that it should be applauded. Nonetheless, I have spent a couple of hours just looking at the last two paragraphs and listening to "All Out Of Love" by Air Supply, which is put to excellent use in both the film and its trailer, and trying to articulate my feelings about it. It's not only that it's difficult to put my own spin on a film in which I can't particularly relate to any of the characters, but also because it's tough to adequately sum up its brilliance.

OK, actually, Guy Pearce played a character who's very sympathetic at times. At one point, I hear he was pegged to play Harvey Dent in The Dark Knight, and his performance as dedicated cop Leckie is just as I imagine his spin on that character would have been, even if he's wearing Gary Oldman's Jim Gordon facial hair. I didn't really care about any of the other characters, but that's not to say they aren't interesting to watch. Writer-director David Michôd's admirable feat is to present us with characters who made me want to run away screaming and yet still hold my attention for the duration. 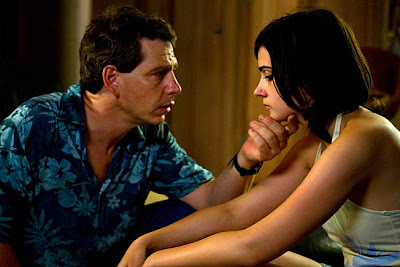 Let's be clear- it is a very good film, exceptionally well made, and complemented by a cast at the peak of their powers. But it also inhabits a very grubby world, in which the animal kingdom of the title refers more to the Circle of Life than criminals being the king of the jungle. Within the first ten minutes, we're told in no uncertain terms that crooks must come undone. The Codys are crooks. Remember how the title of There Will Be Blood became a prophecy that filled you with dread all the way through watching the film? This film's mantra- all crooks come undone- is no less unsettling.

That dreadful statement eventually becomes reassurance, as the terror of the criminal characters, amped up and embellished all the way through, grows almost unbearable. Largely, it's down to Ben Mendelsohn, who plays Pope. Pope is the most batshit terrifying character you've seen in a film in at least the last 12 months. His short temper and frightening brutality makes him an absolute force of nature- he's like Hitchcock's Bomb Theory in action, as we wonder just what the fuck he's going to do next as soon as we see him in a scene.

He's the most outright scary actor in the film, but the most formidable performance comes from the Oscar-nominated Jacki Weaver as the Codys' matriarch, Smurf. As a character, she's a veritable lioness- though initially passive and subservient to her male offspring, she becomes fiercely protective of her ability to dote on her family. When that character turns nasty, Weaver packs a mighty dramatic punch, and she just keeps building in power all the way through the film. While Pope's inhumanity is the terror of the film, Smurf's humanity is somehow more disquieting at certain points.

All of the ingredients would be there for me to have really loved Animal Kingdom if I could only say that newcomer James Frecheville was an identifiable hero, as J. Instead, I found him to be a pretty lifeless character. Pulled between the moral obligation asserted by the police and the fierce loyalty of his mad relatives, there should be more conflict there than Frecheville really conveys. But then it's not all his fault- there's a point late on in the script at which I just completely stopped rooting for his character. It's a small action, but one which utterly ruined any iota of sympathy I might have had for him. 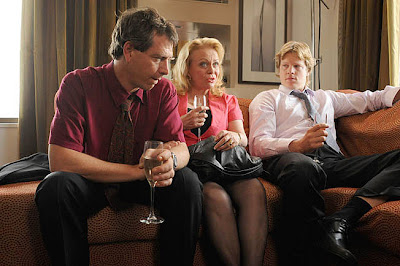 If crime films are your bag, then you absolutely cannot miss Animal Kingdom. It's intense, terrifying and compelling from start to finish in its treatment of the crime movie expectations. Aside from the lead character, there's a bunch of superbly drawn and often disgusting characters, performed by the cast with blistering skill. It comes back to that Air Supply song, in the end- for me at least, I'm now unable to hear that song without thinking of this film. The song isn't even hugely important in the grand scheme of things, but an inextricable link has been forged between that song and this brilliantly made film. Likeable or not, it's still pretty much unforgettable.

A wonderful review. You write very well. I think I'll rent this movie before the Oscars. It sounds like my cup of tea.