SEASON OF THE WITCH- Review 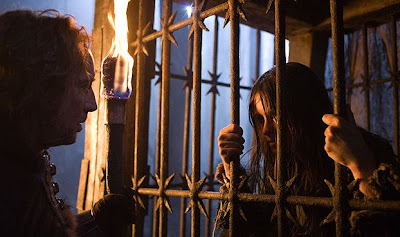 After a banner 2010 saw him at his weirdest and best in The Bad Lieutenant: Port of Call New Orleans, doing some hilarious crowd-pleasing in Kick-Ass, and even being better than average in his usual Disney live-action outing, The Sorcerer's Apprentice, how does Nicolas Cage choose to start 2011? Naturally, he reverts back to exactly the kind of rubbish we've seen him coast along on before last year's outings got people interested in him again.

His latest betrayal of his fanbase goes by the name of Season of the Witch, and he plays Behmen, a knight who deserts from the Crusades with his comrade and best friend, Felson. They're caught out in a small parish that's troubled by the Black Death, and commanded by church officials to take an accused witch across country to a place where her evil can be put to an end. It's believed her witchcraft is the cause of the plague, and Behmen is less easily convinced that the young woman in his charge is guilty.

For starters, I think the main problems with Season of the Witch are twofold, but they both relate to juxtaposed elements that never quite mesh. Firstly, I can't tell if it's meant to be a fantasy film or a horror film, and it's not fantastical enough or scary enough to fit into either one of those alone. Second of all, the involvement of Felson, mentioned above, makes Nicolas Cage part of a double act. Unless his opposite number is Chloe Moretz, and the film is Kick-Ass, Cage in a double act doesn't really work, as Jay Baruchel and Justin Bartha can attest. Weirder still, Felson is played by part-time Hellboy and genre stalwart Ron Perlman.

Just try and imagine that combination in your head. Nicolas Cage and Ron Perlman. You might as well pair up Batman and Muttley for all the chemistry there is between those two actors. Perlman is clearly the better player in this one because of his experience in this type of film. Cage, for all of his celebrity nerdery, should stick to watching films like this rather than acting in them. His vocal rendition of "14th century knight" sounds an awful lot like "MIT professor" or "sorcerer" or "stage magician". Hell, it just sounds a lot like Nicolas Cage. 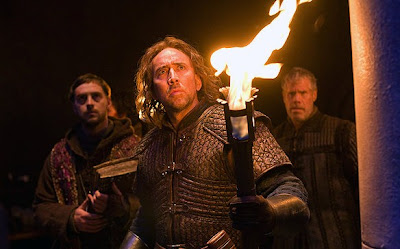 And even weirder still, it almost seems like the supporting cast are doing American accents to cover the losses of the leads. The great Stephen Graham's role is an embarrassment to a fine actor, and Robert Sheehan occasionally lapses back into his Irish accent, more familiar to fans of Misfits. There are no rewards for the actors on hand here, as the motley ensemble of characters trudge along on the road to holy ground, with their predictable arcs meeting their peaks and troughs like clockwork.

Claire Foy manages well enough as the seasonal may-or-may-not-be-gribbly of the title, but there's very little ambiguity about her character. Well, there's at least no chance that she might be just a wrongfully accused regular human girl. The turnaround we have instead takes us into much more familiar territory, lifting from horror films as we take a running leap towards a thoroughly uninspired denouement. Season of the Witch isn't that bad- it's just so uninspiring and such a minor effort that it's not worth the corresponding effort required for the audience to go out and see it. 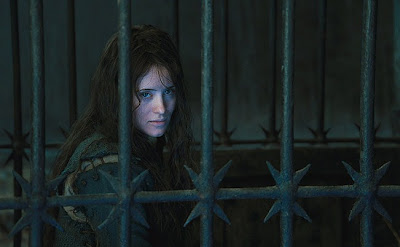 And Season of the Witch, like so many of Cage's minor efforts before it, is a film they shouldn't have bothered with if they couldn't do it well. There's nothing to really chastise or praise about it because it's all so bloody forgettable, just like last year's Solomon Kane. For a similar, but much better film, go and find Black Death, the British horror film that's just recently come out on DVD. There isn't even any of the patented Cage unintentional comedy to stir you from the neutrality of this uninspired guff.

Excellent review, this is the finest one I've read about this film so far...

I'm a big fan of Nic Cage but I won't see this one for I know I'll only be disappointed.
And I hope Claire Foy chooses better roles in the futur as she was excellent in the BBC adaptation of Little Dorrit.

I was going to see this, just so I could review it for the radio. Good idea? Bad idea?

Well, I am guesting on a lunch time showing telling people about the weeks releases. This is every wednesday. What can I say about it? without basically telling people to avoid it