THE NEXT THREE DAYS- Review 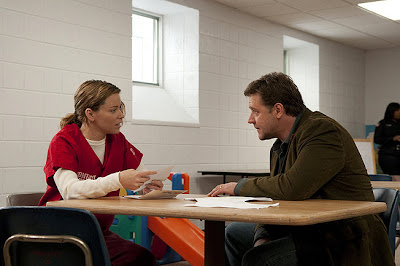 Nestled in between a bit of true excellence in The King's Speech and Nicolas Cage doing his paycheck thing in Season of the Witch, let's not forget that there's room this weekend for a decent drama like The Next Three Days. Coming from writer-director Paul Haggis and starring Russell Crowe, it's got all of the high Oscar calibre of The King's Speech with none of the heavy-handed approach of 127 Hours (review coming on Monday).

Crowe plays John Brennan, whose idyllic family life is torn asunder when his wife Lara is arrested for murder and sentenced to life in prison. John knows her well enough that he never stops believing in her innocence, but all of the evidence signifies that she's guilty. When her latest appeal is denied, Lara has already been behind bars for three years, and it's time to resort to desperate measures- John must break Lara out of prison and flee the country.

If you remember, I was looking forward to this one anyway. Since I made that initial post however, I have seen a lot of bad buzz around this film. It has a Fresh score of just 49% on Rotten Tomatoes, for starters. Then I found out it was an English language remake of Anything For Her, a French film released in the UK in 2009, which doesn't usually bode well, and I suspect that many critics will hold that against it as they did for Let Me In. That said, I haven't seen Anything For Her, and as it turned out, The Next Three Days was actually pretty good.

Not everyone's going to agree with me on this one, but I found it to be perfectly serviceable.Aside from his awards darling Crash, Paul Haggis is known for having made script revisions on the two Daniel Craig 007 outings, and he's using much more of that experience here than anything of his other work. As in Casino Royale, the action sequences are well-spaced out, and the screenplay has quite a pronounced classical three act structure, even with an unnecessary flash-forward to open the film. Where the lack of Crash's political resonance might push against it is in how some may think it's not really about anything. 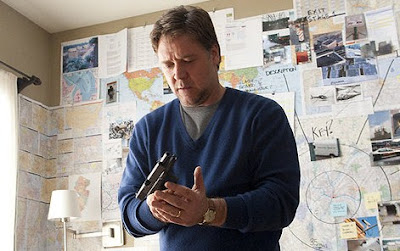 For instance, the film could have been a critique of the justice sysem, but then Law Abiding Citizen was a critique of the justice system and that was shit. Then again, it never really shows any curiosity about the crime that puts Lara in jail either, or in who really did it if she's actually innocent. But for me, it was all about that character of John Brennan. The film's masterstroke is in casting Russell Crowe as the totally inexperienced John. And when I say totally inexperienced, I don't mean that he's never picked up a gun before now and then he's suddenly Jason Bourne when the situation arises. At one point, he actually utters the line "Show me where the bullets go" when purchasing a gun, and you can believe he doesn't know that even if you did see the same actor killing people left and centre on Sky Movies the other week. Somehow, Crowe completely sells it. There's an appreciable learning curve in his bold attempts to liberate Lara.

OK, so there are a few slightly convoluted scenes in which he goes to the library to loan out "Jail Breaking For Dummies" or titles to that effect, and from there he discovers an extended Liam Neeson cameo that really stretches credulity. But even after these scenes, however seamlessly or messily they are inserted into the screenplay, we can get behind him, and care about whether his latest attempt succeeds or fails. Haggis appreciates that there's no reason why the first 90 minutes shouldn't kick as much ass as the climactic 30 minute setpiece, which leaves John just the titular three days to save his wife.

From there, it becomes more of an action film, but laying the groundwork with the characters is what makes that so watchable. By the same token, you almost feel annoyed at the introduction of two hyper-clever FBI agents to up the ante- we haven't seen them before, so what are they doing here now? It all comes together in a scene that puts Crowe in a car with Elizabeth Banks, who does a great job distinguishing herself from her comedic work, and brings a previously hinted plot point to fruition. It's a great moment of drama that simultaneously pierces the relentless action as well as strengthening it. By this point, we know the stakes, we know the character, and it's all very intense. 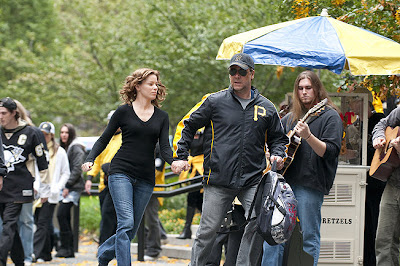 The Next Three Days turns out to have one of Russell Crowe's best turns in a good while, supported by short but sweet appearances from Olivia Wilde and Brian Dennehy, a nice supporting turn by Elizabeth Banks and a solid action climax that you can actually emotionally invest in. From the standpoint of someone who hasn't seen the original, it never feels as clichéd as it actually is once you pick it away into its constituent parts. I really enjoyed it, and it proves diverting even in a week where it's likely to be outclassed by other dramas with higher profiles.