Right, let's start with story, shall we? Theoretically, the story of Gulliver's Travels, created by Jonathan Swift to subtly satirise government and politics so as to avoid being executed for his views, is a travelogue by Lemuel Gulliver. Gulliver is shipwrecked in a country where the inhabitants are 1/12 of his height, and variously travels to several other weird and wonderful places as the narrative progresses and Swift's critiques of the established order are embellished.

In Gulliver's Travels, a film from the makers of Shrek and Monsters vs. Aliens, the tale is modernised to centre around Jack Black as the now more implausibly named Lemuel Gulliver, an dislikeable bumbag who is never going to get out of the rut of employment he's nestled into at the New York Tribune. After resorting to shameless measures with the travel editor to bag a writing assignment in the Bermuda Triangle, Gulliver winds up shipwrecked in Lilliput. And that's where any manner of faithfulness to the text ends.

I'm only putting the gloves on for the advertising. To go into a rant about how it's stupidly over-exposed in trailers and adverts, like The A-Team before it, belies how apt the advertising actually was. It was crude, it looked terrible, and I for one wanted nothing more than for it to fuck off and die every time it assaulted my eyes and brain. That's pretty much how Gulliver's Travels, the movie, turns out. Some honest fellow in 20th Century Fox's marketing department deserves a quicker death than his cohorts in this enterprise. 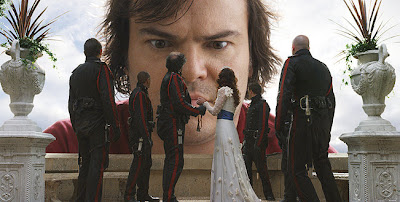 Gulliver's Travels is bad. And I mean, really bad. That salient point is the only way I can quickly get across my thoughts and feelings on this utter train-wreck of a motion picture. It is without wit, without irony, without innovation and without thought or feeling for anyone silly enough to pay cash money to see it. More notably however, it's without laughs. The kids in the screening I caught will testify to that. I'm not making this up- many of them laughed at the trailers before the film, for coming attractions like Gnomeo and Juliet and Yogi Bear, and at the Ice Age short that played before the main feature. For the entire duration of the main attraction, the whole cinema was deathly silent. You'll have more fun reading about Jonathan Swift's descent into madness on Wikipedia is than watching this film.

But what's wrong with it specifically? Well, simply put, it's Gulliver's Travels a la Dreamworks. I have been harsh on Dreamworks in the past, but I am speaking literally here- one of the screenwriters worked on the first two Shrek films and the director is Rob Letterman, who made a decent job of last year's Monsters vs. Aliens. But think of everything that comes with a bad Dreamworks film. Inane pop culture references, repurposed but no less blatant product placement, unfunny jokes that aim no higher than the shins of the lowest common denominator, and most annoyingly in this case, Jack Black.

As a rule, I generally like Jack Black, no matter how much of a pounding he took in my estimation after A Clockwork Orange style consumption of that Orange advert for this film before each and every one of the 40 films I've seen in the cinema since August. The trouble is, his repetitive schtick can get sort of irksome, especially when you cast him as a character as flagrantly abominable as this film's rendition of Gulliver. People say he plays himself, but I can't quite believe the image of Jack Black in films is anything close to the man himself. Because otherwise no one would be able to stand working with him. 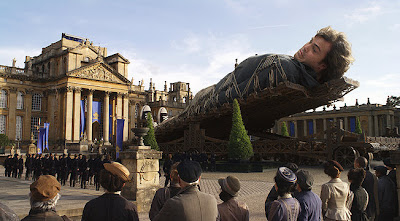 Towering over the cast of Liliputians as he does, there's a fair argument to be made that Black is acting in a different film to them, added in afterwards through the magic of green screens. Supporting players like Billy Connolly and Jason Segel and Emily Blunt and Catherine Tate and... well, most of the little people are better than films like this. Only James Corden seems on the same wavelength as Black, with the consequence that you actually root for Chris O'Dowd as the film's villain as he calls out Gulliver's every action for the bullshit that it really is.

It's even more of a wasted opportunity when you consider that there are no prominent grown-up adaptations of Swift's novel, which contains more invention and intelligence than anyone bothered with on this version. Nothing about it shows an understanding of the potential of the source material. Too often, themes of corruption and war are glossed over by the need for apparently box-ticking sequences involving Jack Black playing Guitar Hero with little people, or pretending that Star Wars is the story of his life (and even that idea has been done elsewhere), or fighting a Transformer, or having a fucking song and dance number.

And so its lack of irony actually becomes something quite interesting. Look at that supporting cast again- they're all English, except for Jason Segel who makes a good stab at an English accent. Along with his rambunctious nature and ego issues, Black's Gulliver brings with him the worst parts of American culture. To get political for a moment in a vain effort to reclaim the original text's perspective, is it possible that with David Cameron installed in government with the aid of News International, Murdoch subsidiary 20th Century Fox sees Britain as an island of little people who gratefully take what we're spoon-fed via cultural imperialism? As a commentary on hegemony, it could be quite fascinating. However, it's supposed to be Night At The Museum, and it's actually a big pile of shite. 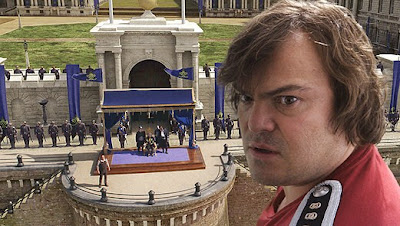 If this version of Gulliver's Travels hadn't been made, someone would have made it up as a joke. Indeed, I know many people who were initially confused by the Orange adverts for this film, believing it to be a joke trailer in the vein of the company's previous campaigns about Danny Glover's Dial Hard or Sean Astin's Lord of the Ringtones. The trouble is, it does exist, and it's hard to find anything funny about this film's existence. Gulliver's Travels is rotten- plain and simple. It is assembly line fodder of the most outright stupid kind, and nothing brings me more cheer at the end of 2010 than to see this film failing to make bank. Keep up the good work by staying at home, away from its awfulness, and 2011 will look a lot brighter.

I'm Mark the mad prophet, and until next time, don't watch anything I wouldn't watch.
Posted by Mark at 21:00

Sounds a lot worse than I thought it might be.

Quick question: which is less funny, this or Year One?