South of the Border... - MACHETE Review

Seen the above? That's as much fun as you can have with Machete. After the relative failure of the Planet Terror and Death Proof double bill grindhouse throwback, Robert Rodriguez returns to cod-exploitation with a feature length version of one of the fake trailers produced for the earlier films. Specifically, Machete- pronounced with a solid "ch" and not "sh". Ma-shete, Machete- let's call the whole thing off.

The plot is much as it appears in the trailer. They fuck with the wrong Mexican when They frame ex-federale Machete for an assassination attempt on a senator with a hard line on immigration. For the feature length version, Rodriguez contrives that They are on the senator's own staff, plotting to start a war between America and Mexican illegal immigrants. At what point in the trailer above did you find yourself looking forward to the social subtext to be had in a film called Machete?

I'm not one to complain that a film doesn't need a story. There are far too many films without good stories for me to ever legitimately grouse about that. The problem is that what I just called a social subtext is more like the entire film. I understand entirely that it's a thorny political issue in America, and that Rodriguez is probably taking a cue from his buddy Quentin Tarantino's Inglourious Basterds, doing what that film did for Jewish wish fulfilment in the context of relations between the US and Mexico. Remembering how Basterds was both serious and funny by turns as well as being a step away from Tarantino's own half of the Grindhouse twofer, this one falls considerably short of the mark. 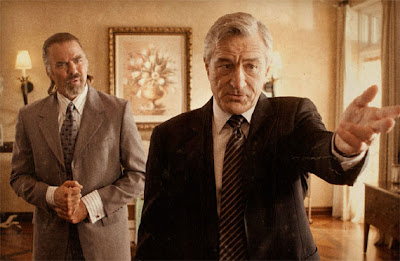 I almost wonder which came first- the desire to make a statement on these issues, or the idea for the spoof trailer in Grindhouse. On the evidence of the feature, it was almost certainly the latter. It all seems like a massively over-elaborate conflation from a trailer that made us laugh in the spirit it was intended, but which can't be sustained over 100 minutes. Believe me, Machete outstays its welcome so much that it feels a hell of a lot longer.

In the way of Planet Terror, Machete doesn't even convince as exploitation, but then it's not trying as hard. Aside from the abominable CGI blood effects, there's none of the deliberately spoiled looking film-stock feel of the previous effort. What does return is the smuggery about all the recognisable actors in on the joke, but it returns in a fashion as over-the-top as it's possible to be. Jessica Alba, Robert DeNiro and Lindsay Lohan could all have been excised from the overly busy story at script stage, and like the overblown sense of political relevance added to the original gag of the trailer, their roles probably inflated massively after these casting coups were made.

You can't really fail completely when adapting an idea as enjoyable as the one in that trailer though, and Machete is not without one or two iconic action moments to make it worthwhile. Danny Trejo is often a joy to watch in the lead role, which only makes it more annoying when the myriad peripheral plot points crowd him off-screen for minutes at a time. Cheech Marin, Jeff Fahey and Michelle Rodriguez are all very game too, but likewise, there's not enough of them. It's a film that seems padded to fill 100 minutes when it could have comfortably been better at 70-80 minutes of its better moments, instead of the diluted version we got. 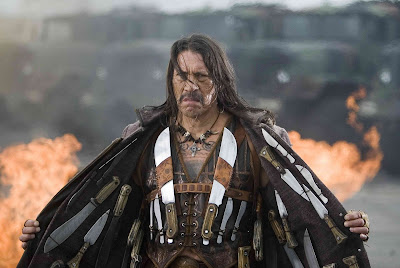 Machete seems to have been hijacked by the desire to spoonfeed a political message to the action-loving audience. The trouble is that in presuming this message to be a bitter pill, it becomes dumbed down to the extent that no one can really see the point for all of the red-splattered, limb-chopping, boob-bouncing action. It's over crowded to a fatal degree, and it really is a case where less would have been considerably more. Luckily, less already is more- that trailer's just up there, if you want to watch it again. If it's proper exploitation fun you want, Black Dynamite's finally coming to DVD, very soon.

I agree, this film was disappointing, the various sub-plots really took away from the overall quality, I felt that it should of concentrated on Machete much more, Alba's character for example could have been cut out of the film entirely and it would probably have been better...

Black Dynamite was way better, at least it was hilarious ,unlike Machete.