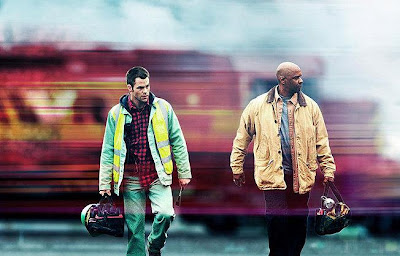 Last week, I likened the writers and director of The Tournament to action maestro Tony Scott. The comparison was meant as a compliment, given how they showed the same technical flair in their very first film, bolstered by hunger for the craft, that so often goes to waste now that Scott himself is at such an advanced stage of his directorial career. Right on time, Unstoppable rolls into the station to show once again how he's really just working on auto-pilot.

On his first day at work, conductor Will is paired with veteran engineer Frank and sent out onto the rails. Coincidentally, today is the day that an unmanned freight train carrying gallons upon gallons of molten phenol, (which might as well be labelled "Chemical X") pounds its way along at over 70mph into a population centre in Pennsylvania, where it will surely cause a terrible disaster. Frank has some ideas about how to stop this railed behemoth, and the two mismatched men must work together to avert railway-related catastrophe.

It's fair to say that Unstoppable is the film I wish Tony Scott had made last year instead of The Taking of Pelham 123, his deplorable remake of one of my favourite films of all time. That's not to say that this film's any good, it's just a hell of a lot more watchable than The Taking of Pelham 123. And I can't tell you what he has against trains, either. It's like watching 98 minutes of an advert for Brawndo, the Thirst Mutilator. It never builds or sustains the kind of tension it's angling for, but it remains an exhausting viewing experience, even for its relatively short length.

The idea of the film is much like the train it centres around. It's essentially a low-grade action thriller that's gathered steam from its inception to its realisation. A monster movie wherein a train is partly personified becomes a much bigger deal when it hoovers up a director of Scott's standing, an Oscar-winning actor who likes to work with that director, a young actor freshly laden with plaudits from his big breakout role and of course, a presumably enormous budget.

And likewise, any given Tony Scott film always feel like an unmanned train in danger of exploding violently. He's directed enough action films- you would hope by now that he would have recognisable flourishes, or little visual cues that distinguished him from any number of much younger directors trying to break out of music videos or reality TV highlights reels. There's none of that, and there's no technical aptitude in the editing either- so much of the film takes place through the lens of Fox News (guess who produced this film?), and there's no verisimilitude in the dizzying arrangement of shots. The editing is just highly haphazard and hugely distracting.

Particularly annoying is the old trope of films like these, is to deploy on-screen sluglines whenever we cross an international border or enter a top-secret facility of some description. If all of these sluglines were removed from the film, all you'd need to know is this- Unstoppable takes place in Pennsylvania. If you're keeping track of thrilling locations within Pennsylvania, such as "Fuller Yard" and "Zinc Plant", then I suspect that you're missing the point of the film. That's perfectly excusable though, because so has Scott. 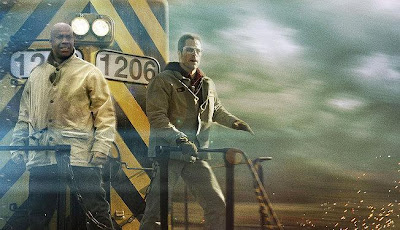 Oddly though, Scott always seems to get his cast to take it seriously. Not that you'd know it from the amount of times Denzel Washington and Chris Pine are reduced to laughing at nothing in a weak attempt to build camaraderie between them. Both actors are individually fine though, and I also give kudos to Rosario Dawson, who gets some really risible dialogue to chew on, like the much-parodied line about the length of the Chrysler Building.

Unstoppable almost works as a comedy purely because the cast are able to convince. It's a film where a train is a monster! People actually try shooting it in order to stop its inexorable momentum! The train is arguably a more comfortably established character than any of the actual people. It should be more bonkers than it actually is, but crucially, it ought to be more fun too. Instead, it's too condescending and headache-inducing for me ever to consider it as fun. Tony Scott once again proves himself to be the master of the adequate actioner.