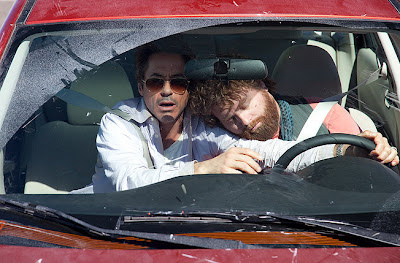 At what point does something shift from being a loving homage or a "thematic remake" to being an all-out rip-off? The answer is probably to be found somewhere to be found between the greenlighting of Due Date and its arrival in cinemas this week. In almost every respect, I preferred it when it was called Planes, Trains and Automobiles.

A hectored businessman is travelling home and ends up stuck with a loveable buffoon who gets him in and out of all kinds of scrapes. The basic skeleton is the same, and there's not a lot of meat on the bones- the businessman is Peter Highman, whose wife is giving birth to their first child at the end of the week. An altercation with Ethan Tremblay, the buffoon, gets him on the no-fly list, and the two of them cross America together before the arrival of Peter's first-born.

Todd Phillips is clearly on top of the pile at the moment, what with his uber-successful comedy The Hangover becoming one of the big sleeper hits of 2009 and working its way into the affections of a million Facebook users who like to start arbitrary groups with names like "Doug's in the trunk, LOL JK, it's a naked Asian guy with a stick". When you make that film, you're allowed to make whatever you want to make next, within reason.

Phillips resolved to go backwards, not only by making a film closer to his Road Trip or Old School than to The Hangover, but also by plagiarising from a much better John Hughes film. I don't want every film to cite its influences as blatantly as Easy A professed its roots in the Hughes canon, but this film doesn't have a high enough IQ for me to believe Phillips knew he was ripping off Planes, Trains and Automobiles. If he did, that just makes it even worse, because the only clear benefit of his perspective on the story comes in the form of pot jokes and a masturbating dog. 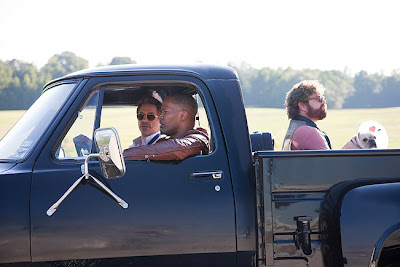 The story beats are almost exactly the same too. Peter gets beat up when he loses his cool with someone, a rental car is destroyed, Peter considers abandoning Ethan- all things that happened before, and happened with more humour and warmth, to Neal Page and Del Griffith back in 1987. That film was tender in the way that the very best of John Hughes' work is funny and tender. Due Date is a lot more callous, appealing to the lowest common denominator.

Robert Downey Jr. steps in for Steve Martin, and astoundingly, the film manages to make him unlikeable. After a dazzling run of great roles from 2005's Kiss Kiss Bang Bang up until now, this film really made me dislike Robert Downey Jr. Do we give a shit if he gets home on time? No, because the only urgency about his character's odyssey is supposed to come from Michelle Monaghan, who literally phones in her peformance as the expectant mother of Peter's child. Some sympathy with Peter is sorely needed and sadly absent, when you consider what he's contrasted with.

Fresh off of The Hangover, Zach Galifianakis is another man-child as Ethan. In John Candy's performance as Del, there was a real human being visible. He has that absolutely wonderful monologue where he retorts to a blistering rant by Steve Martin by saying he's happy in himself, and that he has loved ones who like him for who he is too. It's a sober moment that a cartoon character like Galifianakis would never get, and I really don't think he has the range to pull off something like that. Instead, Ethan is calculated to annoy the shit out of Peter, and I dare say the audience as well, and act without any recognisable indication of human behaviour. 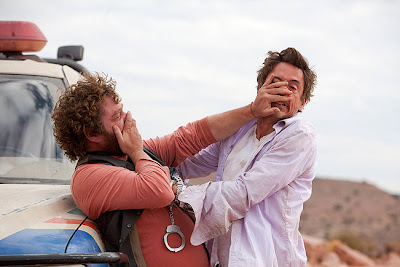 It all rings false, and although it's not without its moments, it's all very meticulously pitched towards being a hit of the exact same type as The Hangover. Galifianakis actually says "LOL JK" at one point for that very purpose, but even with the spontaneous group-making tendencies of its target audience, I can't see there being many groups called "The Pilgrims Built The Grand Canyon" or "I Hate It When I'm Smoking Weed For My Glaucoma And I Get Arrested" or "I Gut-Punched A Six Year Old LOL". Well, maybe that will happen, but for all of the moments I just said the film has, I'll be damned if I can remember many of them.

Due Date is a waste, really. It's Todd Phillips' failure to realise that the success of The Hangover happened by circumstance and not by design. Indeed, given how most of his movies are road movies, I'm surprised at how long its taken him to make a film that takes off Planes, Trains and Automobiles so blatantly. And pitched as it is for the generation who loves The Hangover, it really pales in comparison. Too many plot turns ring false and too many jokes fall flat. My hopes are suitably lowered for next summer's The Hangover Part II.