Attack of the 50ft Whatever- SKYLINE Review 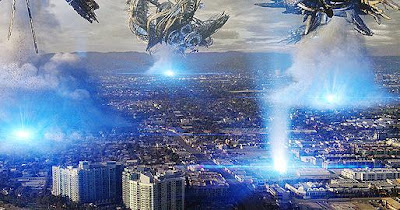 A year ago this week, or close enough, we were treated to Roland Emmerich's rendition of the apocalypse in disaster movie 2012. In its place this year, we get another disaster movie that explores global catastrophe by more ostensible causes, a low-budget alien invasion flick called Skyline. It seems only fair in the aftermath of seeing the things to level people's expectations- those great ads and trailers you've seen don't mention that it's a film from the directors of AVPR- Aliens vs. Predator Requiem.

Letting bygones be bygones though, Skyline presents us with Jarrod, a man who flies out to LA with his pregnant girlfriend, to reunite with his rich best friend in his swanky apartment. But wouldn't you know it- aliens arrive on Earth that very night. Abduction seems to be the name of the game with countless humans being hoovered into collossal spaceships in a bright blue light that no one seems able to resist. The visitors scour the city for resistance, but for Jarrod, the survival of his family is paramount. 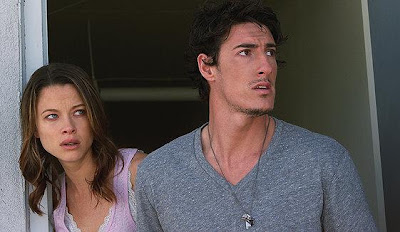 One of the selling points of Skyline has been how modestly budgeted it is, and the level of technical prowess on show for that comparatively low budget. In a few weeks, I'll say the same of Monsters, except that where Gareth Edwards marries alien invasion with arthouse indie cinema, the Brothers Strause have made one of those Syfy Original films. It's not Sharktopus, but tonally, it might as well be the same. And for an alien invasion film so reliant on its independent credibility, it depends on an awful lot of the sub-genre's past works.

Steven Spielberg has the rulebook pretty much tied up when it comes to alien invasion films, but it's not just the influence of his tropes that holds court in this one. There are also recognisable segments cribbed from Cloverfield, Independence Day, The Day of the Triffids and Night of the Living Dead. From Spielberg, there's the very obvious influence of War of the Worlds, with whole sequences that might as well be lifted wholesale from his 2005 version. It even cribs from Michael Bay in one eye-rolling action shot, and for the massive lapses in comprehension and intelligence at sporadic points of the film, it almost comes close to being his version of War of the Worlds. I don't wish to do the film a disservice by saying that, because for the most part, it's pretty engaging.

I'm really not sure why this film's opening in November, except to try and follow from the example of the uber-budget 2012 at the box office. I reckon this one could have held its own in the summer, especially in a summer that was lacking in new properties. Skyline might be middle of the road sci-fi action fodder, but it feels out of place as dark nights close in and Christmas looms around the corner. It also has some impressive special effects sequences, most notably in a dazzling dogfight between the US Air Force and the encroaching aliens. 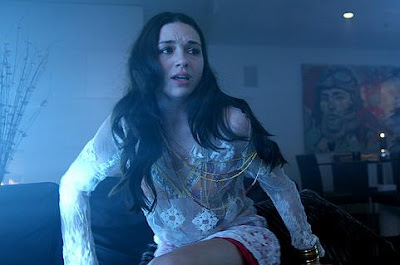 There's also a nice feeling of claustrophobia. Nice, as in how it enhances the setting of the film, rather than how warm and fuzzy it makes you feel. It's not a warm and fuzzy feeling at all, but one which hangs about the characters' every action. It eschews the cliche of showing news footage to inform the wider context, instead cutting them, and thus the audience, off from any information about what is happening and why. That just makes it all the more scary whenever we catch a glimpse of the invaders, who are most often seen as a nightmare fuelled hybrid of Cyberman and Cthulhu. The information blackout is a much needed neat touch in a film that's so very derivative.

Of the Brothers Strause,  I will say this. Their experience working on SFX for huge blockbusters inbetween their own works obviously paid off when it came to rendering the other-worldly in this one. However, as with their first feature, the script and direction both need more work. There's never any feeling of jeopardy. You are more sympathetic than I am if you feel any tension or emotion for the characters beyond the standard jolts the film throws out to check you're still paying attention. Also, a nuke plays a key part at one point, just as it did in the Brothers' AVPR, and the effects of said detonation are as woefully underplayed as it's possible to be without Harrison Ford getting into a fridge.

The ending happened to be the final insult in a film that I was warming to more and more as I went along. And this is from the guy who likes the ending of The Last Exorcism. The final scene of this film feels almost like a wacky alternate ending from a DVD special edition no one's really fussed about, and had it only been left on the cutting room floor, it wouldn't have left such a bad taste in my mouth. It's a dopey denouement that's abrupt so as to suggest a sequel, and on that level alone, it works. I would totally go and see a sequel where they deal with the lumpy bed they've made for themselves with any potential follow-up. 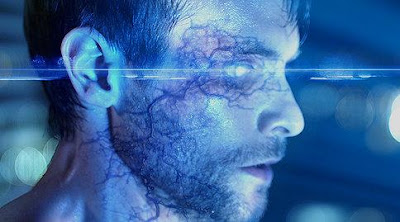 Skyline turns out to be one of those films that might ostensibly seem to have been cobbled together from other films- a kind of Frankenstein's movie that lumbers into multiplexes every so often to carry out the cinematic equivalent of Peter Boyle singing "Puttin' On The Ritz". It will dazzle very few audiences, and it's by no means certain that the planned sequel will manifest itself. The film is undone by the time the credits roll, but there's more than enough here to divert viewers, even if it can't quite satisfy anyone. A solid but strange B-movie.