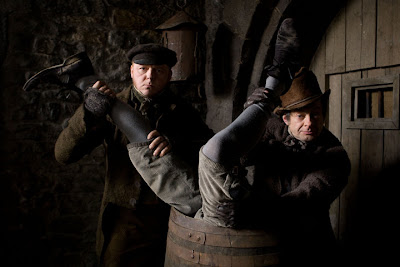 The sheer weight of talent involved in Burke & Hare should be enough to secure its status as one of the must-see films of the year. Starring Simon Pegg, Andy Serkis, Jessica Hynes, Isla Fisher, Tom Wilkinson and Ronnie Corbett, it's a horror comedy from An American Werewolf in London director John Landis. Trouble is, it's rooted in history.

It's basically a macabre spin on the West Port murders, perpetrated by William Burke and William Hare in the 1820s. As the film has it, Burke and Hare are confidence tricksters who get lucky when their elderly lodger expires. They lose the rent money he was paying them, but find a lucrative line of business in body-snatching on behalf of Edinburgh University's anatomy department. When demand exceeds supply, the pair turn to a life of crime to create stock... 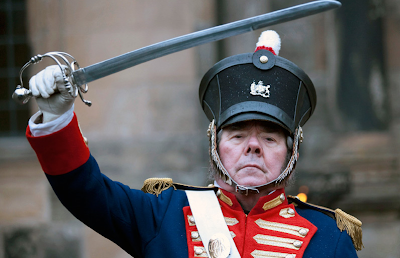 I watched most of Burke & Hare through the fug of a bad mood. The local multiplex failed me on the technical side of things, with an out of focus projection of the film. Working to a deadline for Den of Geek, I didn't want to push past the other viewers in the packed-out screening and complain. Presumably projectionists are now so accustomed to 3D that when they glance through their windows, it's ok that it looks a little bit blurry. I mention this for the purposes of full disclosure, because although I like the film, it wasn't nearly as good as I was expecting.

Even when blurred, the period detail is great and the fantastic cast are equal to the task of being in a film as eagerly anticipated as a John Landis horror comedy. The thing is, it's neither scary nor all that funny. The biggest belly laughs in the film come from more slapstick-y moments, like an excellently executed cameo by Paul Whitehouse. Likewise, the most enjoyable scares in the thing come from over-the-top anatomical sound effects, but there's not enough of that either. It's not as clever as it really ought to be, and I don't think Landis has quite pulled off the mix of dark comedy and historical re-telling.

Somehow it feels like he looked upon the story as quaint. Don't get me wrong, there's some very sharp interpretation of established history, departing from whatever Wikipedia might have to say about the real Burke and Hare. However, Landis puts us into some brand of Movie Scotland. Isla Fisher, for one, would have been perfectly watchable if she hadn't been hamstrung by a stodgy Scottish accent. Similarly, the welcome sight of Tim Curry is marred by his grappling with dialects. 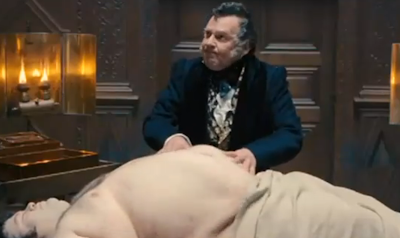 It comes from the Ealing Studios brand, but it's closer in tone to Carry On Screaming than to The Ladykillers. There are snatched glimpses of the wry tradition that typified Ealing in its heyday, but it's not a film that holds a lot of surprises, unless you think you know what to expect. Over on Twitter, Simon Pegg has championed the film's revisionist stance, and I was indeed very interested in how the script considers the wider context of Burke and Hare's crimes rather than condemning them as evil murderers or such like.

However, the film opens by telling us that it's based on true events, "except for the parts that are not". That's a licence to cut loose with the comedy, but the film never really does. The merest sight of Ronnie Corbett can reduce an audience to gales of laughter when you place him in military regalia, and there are a couple of hilarious sex scenes, but I felt all the thinking had been sunk into the historical detail.

I'm surprised by how quickly this thing came together- just a year ago we thought it would be David Tennant in the lead role. I'm guessing they wanted this plum Halloween release date, but sadly, the quick turnaround shows in the finished film. With a little more post-production, I wonder if we might have got a better film. It's easy to like, but difficult to love, and I'd personally hoped for better. I thought Pegg and Serkis were brilliant, and loved seeing all the Spaced alumni who showed up for the ride. 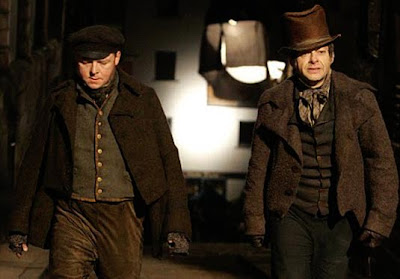 Burke & Hare is a quirky and quaint reimagining of a real life horror story that's previously been dramatised rather than played up for its macabre humour. I can't speak highly enough of the cast, who do brilliantly with what I feel is a middle-of-the-road script. The repute of An American Werewolf In London might possibly have built my expectations up too high, but nothing really surprised me in this one. It all feels decidedly humdrum, with an almost surgical approach to the tone where a melee of blood and guts and belly laughs would, from John Landis at least, have been more palatable.