To Good Hughes- EASY A Review 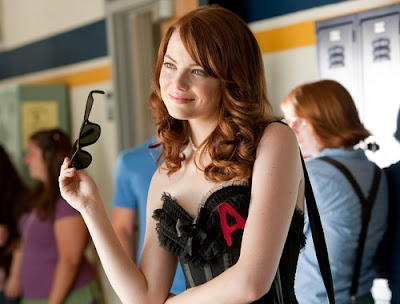 Emma Stone's star has been on the rise for a while now, and as with Andrew Garfield, it's almost a shame to see her get caught in the web of the Spider-Man reboot, from which less interesting career moves can invariably occur. Before she takes a run at Gwen Stacy however, we have Easy A, which is a transparent attempt to launch her as a big name. It works. It's also a very good film.

It's Olive's story, and she's largely unnoticed in high-school. That firmly places this film on a strange planet where looking as gorgeous as Emma Stone makes you dowdy and invisible. In a departure from high-school movie tropes, however, we get a study of gender inequality as Olive suddenly becomes the subject of a school-wide scandal after pretending to have lost her virginity. Rumours of her promiscuity become inflated beyond all recognition when she lends the really hopeless guys in her class some kudos by pretending to have slept with them too.

The frame of reference that everyone and their BFF is ascribing to Easy A is Mean Girls. That's a film I still haven't got around to seeing yet, so that's a caveat I throw out there when I say that this is a really solid and entertaining teen comedy. Something happened to that sub-genre with the arrival of American Pie, which in my opinion is a thoroughly overrated and witless series that undid all of the good work done by John Hughes. It's therefore forgivable that writer Bert V. Royal wears the influence of Hughes on his sleeve, because Easy A is trying to claw back the work that he did in films like The Breakfast Club and Sixteen Candles and countless others. 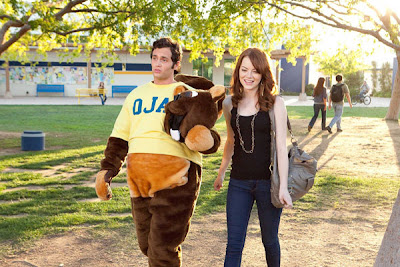 Olive isn't desperate to lose her virginity, If anything, she's desperate to try and reinstate it in places, after the rumour mill symbolically deflowers her. Stone portrays a charming character who is intelligent and rational, rather than passive or ditzy, but she's not above making mistakes. She's a proper character, and that's one of the things that marks this film apart from any number of pie-fucking knock-offs or I Love You Beth Coopers. It's stupidly reductive to call this a "chick flick", looking at the standard of that particular stigma. Easy A is basically the abstinence film that soccer moms claim Twilight to be, without a single bit of that franchise's flinchiness to sex.

Furthermore, it knows its onions when it comes to gender politics. Some of Olive's hopeless male clientele would have been protagonists in weaker films. You know, the kind of film where you're supposed to see the sweaty-palmed as pure-hearted in his odyssey for sex. This one takes pains to show how the guys come off better than Olive, who's ostracised for mistakenly but earnestly trying to help out male friends. In the way of the best teen movies, it's very mature. It's not afraid to talk out why young girls should think things through before doing it, rather than dressing it up the act of sex in allegory and cautionary flim-flam, as Stephanie Meyer and others have done.

In that respect, I'm positively baffled by the film's 15 certificate. The BBFC explains it comprehensively enough, but here's what I thought. There are no massive language shockers, except for one use of "twat" that's heavily apologised for and condemned accordingly by the characters thereafter. The discussion of sex is no worse than what goes on in most secondary schools around the time of Year 9. No, it's not a film for those under 12, but there will be 13 and 14 year old girls who would enjoy this film immensely in cinemas if it weren't rated 15. That's why I suspect this will get more appreciation on DVD, in the UK at least. 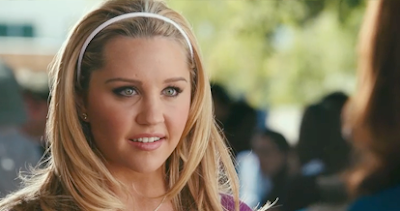 Then again, I understand why it got a 15 certificate- the likes of the Daily Mail would decry it as sick filth otherwise. And speaking of the right wing, Easy A is surprisingly political. Olive's tormentors are led by slightly delusional Bible-bashers, spearheaded by a surprisingly funny Amanda Bynes as a character who calls the religion of other cultures "science fiction" and hounds the slightest of sinners for blasphemy. At the same time as lampooning the right-wing, there's enough space to mock Olive's kooky parents too, who are so far left that they have a bucket list that features "Watch The Bucket List" as an item.

It's as even-handed in its politics as with its handling of the genre's clichés. Although there are points where the film's self-awareness tips over into self-consciousness- yeah, there's a difference- I really can't fault it for its reverence for John Hughes. The difficulty of contemporary certification is part of why we don't get mid-range films like The Breakfast Club any more, and even though it falls afoul of the crevice between the American PG-13 and R ratings, I think it's clever enough and literate enough to pull through.

It also has a very good cast. I've already mentioned Stone and Bynes, and it's talents like theirs that pick up the slack for more vacuous appearances by the likes of Cam Gigandet. Stanley Tucci steals scene after scene, and Thomas Haden Church gives a very sound supporting turn as the Favourite Teacher too. It almost falls apart with the appearance of Lisa Kudrow, who still hasn't found the time to do anything different enough to Phoebe from Friends that you don't go "Hey, it's Phoebe from Friends!" Also, Malcolm McDowell does that thing he does these days, of having wandered into the film by accident and got a credit anyway. There's enough right with the cast in general, that I'm not going to grouse about what's wrong. 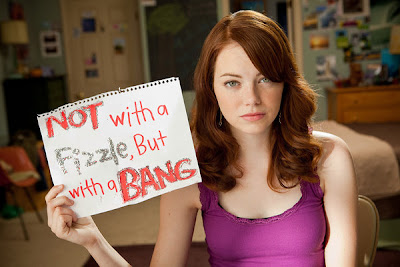 10 Things I Hate About You did The Taming of the Shrew. Clueless did Emma. Ostensibly, Easy A is doing The Scarlet Letter, but it's also got a great affection for John Hughes, from the head-on approach to things that affect teenage boys and girls to the lampshaded random musical number near the end. The appreciation for the Shermer, Illinois canon, and the recognition of certain films' equal value to literature is very progressive.

It doesn't even matter that we're constantly being alerted to these references by the dialogue- it felt worthy of its boasts the whole time I was watching it. It feels fresh, and funny, and smart, and you'd do well to give it a look, especially if you're a fan of the talented Miss Stone.