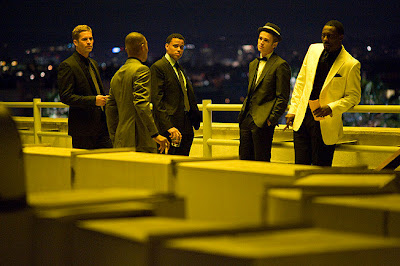 Getting to number one at the US box office isn't always a badge of honour. Making the top spot in the dying days of August, heist flick Takers isn't likely to have left an impression on many. I'd forgive you for having seen it on release and forgotten about it already, cos I'm having to strain to remember it from yesterday.

As far as I can surmise, the film is about a crew of professional bank robbers whose meticulous planning and scheduling is thrown into the disarray by the return of an old member of the gang. Ghost has just been released from prison after being caught on the job and left behind by his friends, and he comes to the gang with a heist plan, but can they trust him? Well, what do you think?

Even putting aside how predictable the "Curse your sudden, yet inevitable betrayal!" moment is, and how formulaic the story is, Takers is just bad. Not one of those films that I'd say is without redeeming features, but good golly, I still wish I hadn't bothered with it. The tail wags the dog to such an extent that the entire film spasms at the behest of heist movie conventions. Nothing of any real importance unfolds, and all of it seems to unfold only because the filmmakers have gleaned that it should from other films, not because they know the story they're telling. 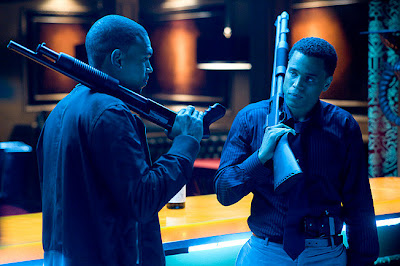 That's never more apparent than with the central dichotomy. We open on Matt Dillon's jaded and underpaid detective, and his partner, played by Jay Hernanadez. We sporadically return to them, and yet the main characters are, apparently, the unappealing douchebags for whom the film is named. That's Takers, as in "of the piss". What's annoying is that while Dillon is hardly on top form, I'd much rather have seen the film about his character than the one about this sub-Hustle gang.

Let's allow for the fact that two of the stars are singers, not actors- Tip 'T.I' Harris and Chris Brown. Harris also produced the film and Brown is seemingly there as a combination of a known "name" musician and a parkour expert. That said, what Takers offers as parkour looks more like You've Been Framed- Brown knocking over everyone in the crowded street that he can in a scene where he runs from the cops- and in my boredom, I actually started awarding him points for every startled woman he wiped the fuck out during his escape.

But then there are the so-called real actors. Paul Walker and Hayden Christensen actually make perfect bank robbers, because their faces are so blank and non-descript that neither of them would ever require to disguise themselves to take up a life of crime. Recognising that it might be difficult to tell them apart, and in the absence of any personality where Christensen is concerned, the former Anakin is embellished with a pork-pie hat that's too small for his noggin, which gave me much needed levity all the way through at just how stupid he looked. Oh, and he still can't act for toffee, but does that surprise anyone? 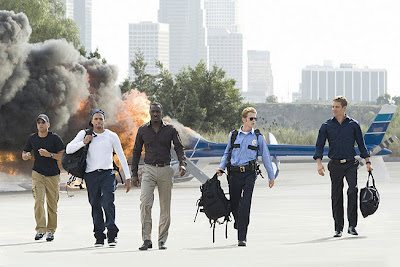 With The Town still playing in cinemas, Ben Affleck is serving up a meaty and entertaining heist movie, so I don't know why you'd go to the soup kitchen instead, for this vacuous non-event of a film. It has lofty aspirations, but it definitely ain't Heat. Ever wondered how shit would Heat have been with rappers and shit actors sitting in for Al Pacino and Robert De Niro? It would have been precisely this shit with tiny hats, funny parkour, Genghis Khan quoting and all. Director John Luessenhop has none of Michael Mann's finesse, and instead he trots through cliche after cliche.

The result makes Takers little more than a prolapsed music video, dragged out to 107 minutes and packed with every heist movie trope in the book. The experienced actors are there to make Harris and Brown look better by comparison, and only Dillon crawls out of the hubris without a scratch on his credibility. Paul Walker and Hayden Christensen somehow manage to look even worse than usual. Presumably Zoe Saldana's extended cameo in here was pre-Avatar, because goodness knows she's better than this colour-graded daylight robbery. Don't let it waste your time.