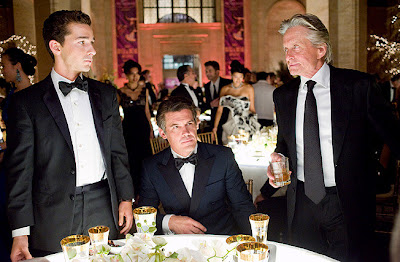 23 years later, with the market in an entirely different state to the market he lambasted with Wall Street, what else would Oliver Stone do but revisit one of his most acclaimed and memorable films with a terribly titled sequel. Yes, it's really called Wall Street: Money Never Sleeps, and there's really no relevance to that except for the obligatory Title Drop and a tenuous reference to a less memorable line from the first film. Moving on.

Jake Moore is an up and coming Wall Street broker who works for Keller Zabel Investments, a bank that goes down the tube in the onset of the recession. For complicated wibbly-wobbly financial reasons, Jake blames his boss and mentor's subsequent suicide on bastardly hedge fund manager Bretton James. Coincidentally, Jake's future father-in-law is none other than Gordon Gekko, who's back on his feet after a long stretch in jail for insider trading and wants to rebuild his relationship with his daughter in exchange for helping Jake exact revenge.

With me? Nah, I thought not. What Wall Street: Money Never Sleeps is missing, desperately, is Martin Sheen. It's not that it's not good to see Michael Douglas reprising his most iconic role, because there's absolutely nothing wrong with his second run as the manipulative Gekko. It's just that Martin Sheen was arguably the heart and soul of the first film, which was predicated on chastising the wealthy and the greedy. The elder Sheen was the film's conscience, while Charlie, his son on-screen and in real life, dicked around with everyone's money and getting rich in the process.

To say that Shia LaBeouf is no Charlie Sheen says just how bad Shia LaBeouf is in this one. Really, even after Revenge of the Fallen and Kingdom of the Crystal Skull, this is somehow the point where I've decided I've had enough of Shia LaBeouf. He is an actor who won't use one word when repeating it three times in quick succession will do, an actor who is even more one-note than Michael Cera, and an actor who constantly shits on the people who got him to his precarious position near the top of the Hollywood dogpile in interviews. Give him a year and he'll be saying that this film was a mistake, without acknowledging that he's the worst thing in it, by far.

The film's problems aren't exclusively down to LaBeouf, who just can't carry a film, let alone this film. It's also down to a de-toothing of the material. I've mentioned that there's nothing really wrong with Douglas' performance, but there is a problem with the way Gordon Gekko is written. He's not the suited shark that we saw first time around, mostly because Stone favoured Josh Brolin's hedge fund bastard as the villain instead. There's also a distinct lack of the sharp dialogue that marked him apart in the first place. Eli Wallach gets more zingers in as a batty old investment banker than Douglas does as Gekko.

Moreover, the film is so over-plotted that there is not a lot of room for clever dialogue after all the exposition is put out there. There is exposition about the same kind of stuff BBC News 24 was running with about a year ago. There is exposition about who Gekko's daughter is, despite how Carey Mulligan is as woefully underused as her female forebears in the first film. Fuck, there's even an expository cameo by the minor Sheen, explaining what he's doing, despite the fact that Stone didn't think he was important enough to revisit properly. The excess of plot, even for the overlong running time, leads to a deficit of audience interest. Money never sleeps, but you might. 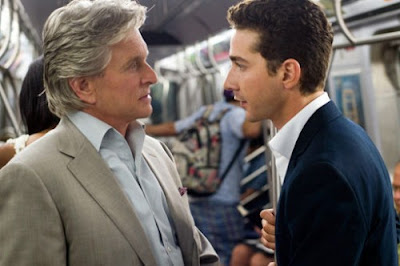 Come to it, the reason why it's Wall Street: Money Never Sleeps and not Wall Street 2 is to draw the unsuspecting core demographic of the multiplex, who might be turned off if they knew it was a sequel to a film about the stock market, and not, as the trailer suggests, a LaBeouf vehicle where a hot shot banker struggles to stay with the love of his life through bike races and shit. That's also why it's been toned down for the 12A certificate, and I dare say that's why it's making any money at all. If you pay to see this film, you'll get nothing back for your investment, and given the subject matter, that's a con that's almost as immersive as 3D.

Wall Street: Money Never Sleeps comes out as a disappointingly gummy sequel to the incisive satire of the original. It can only have been held back from its original April release date for one reason, and that's in the hope of Oscar eligibility. With the dead weight of Shia LaBeouf around its neck, Oliver Stone shouldn't be counting his statuettes. Michael Douglas shows him how it's done, but to paraphrase Gekko in the original film, this sequel creates nothing.