The Eager Have Landed- JACKBOOTS ON WHITEHALL Review The latest development in my ongoing mission to finally see all the films I wanted to see at this year's Edinburgh Film Festival took me to a Nazi-occupied Britain, and Jackboots on Whitehall. It's been quite dangerously compared to Team America- World Police, an action movie parody with puppets that was so on the nose that Michael Bay's face has never looked the same since.

In an alternate history where the Dunkirk landings were a colossal failure, the German invasion of Britain is imminent, led by the not-yet-exploded Hindenburg. A plucky farm boy called Chris leads the charge from a small village in Kent to Downing Street, where he helps rescue a belligerent Winston Churchill from the invaders. He and his rag-tag resistance decamp to Scotland, to fight against Hitler in the final battle for England. 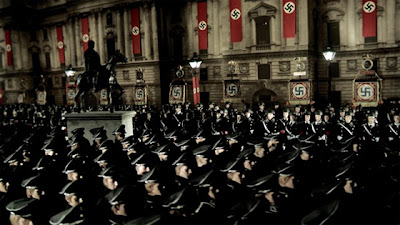 Jackboots on Whitehall's primary players are largely Action Man and Barbie style figurines, whizzing around in Airfix models and toy tanks, and animated to some degree with CGI. It pains me to say that a film with this much potential falls short of the mark, and that such an interesting premise turned out so ordinary. I would go so far as to say that the script as actualised plays out like a first draft, and one which never ever would have been produced in live action.

It's not that the astounding art direction and production design are gimmicks, but that Edmund and Rory McHenry needed to give the script another polish before they settled into their directors' seats to visualise it. The favourable comparisons to Team America don't work because although Trey Parker and Matt Stone obviously had fun with the strictures of puppetry and they made a good-looking film, they're also writers first and foremost. This one plays out like a first draft, because in a second draft, the McHenries would surely have added more jokes. 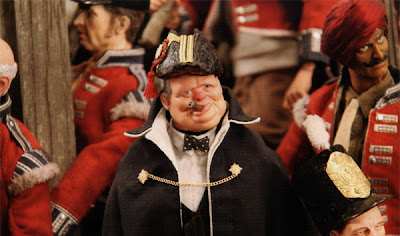 As an aspiring screenwriter myself, I would never presume or insinuate that the McHenries are lazy. This certainly isn't a lazy film, but it feels like it was out of the gate too quickly. Like even another month of script editing would have helped before they got the toys out. Instead, the film does very well at capturing the tone they're after, that of Sunday afternoon war films like The Eagle Has Landed and The Great Escape, by drawing on comedy stereotypes of nationality and a literacy in popular cinema that pulls in various visual and spoken references. But there's not a lot of substance to it, which is to say that it's not really that funny.

I'll tell you exactly the point where the script broke me, because every other review is mentioning it as well. Somewhere in the last fifteen minutes, the stereotypical lampoon of the Scots leads the dialogue to Braveheart jokes. And more than that, a Mel Gibson joke. Part of that Mel Gibson joke actually made me facepalm. I didn't even facepalm when I saw Takers. It's an easy pot-shot at an actor that isn't exactly current, and has no real place in a film set around World War II. To be blunt, it's like a joke from "2 of the 6 writers of Scary Movie"- repent of your sins before my Vampires Suck review comes online next week... 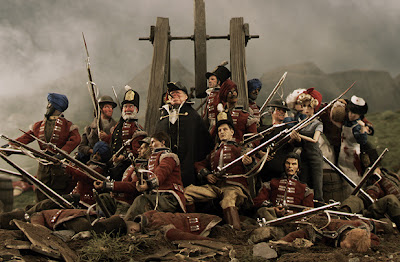 The film has its moments, certainly. For instance, Richard E. Grant's voice acting as the ribald vicar is one of my favourite vocal performances in a while. None of the the cast are as present as Grant on-screen in their plastic counterparts, but none of it sounds phoned in. Timothy Spall does a decent Churchill impression, and Ewan McGregor always sounds earnest with his type of character, but I concede that he does a surprisingly good West Countries accent. But as I say, the obvious love that everyone involved had for the basic idea made it all the more depressing that the final result wasn't better.

The filmmakers' enthusiasm works both for and against Jackboots on Whitehall. It carries a torch for the cinematic pleasures of Michael Caine portraying a Nazi or Clint Eastwood raiding a German castle, and recreates that era rather nicely with some seriously impressive toy-based art direction. The ambition is there, it's just a shame that the laughs aren't. Once again, the script desperately needed work, in my opinion- it should be seated next to Blackadder, not precariously close to that red-headed stepchild of wartime satire, Churchill: The Hollywood Years. It looks and sounds great, but very sadly, it's a disappointment.

I'm Mark the mad prophet, and until next time, don't watch anything I wouldn't watch.
Posted by Mark at 07:00