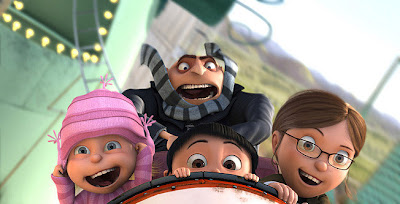 The autumn half term is fast approaching, and as The Film Distributors Association points out before every film you see in the cinema, there are some family films incoming. One of the most promising is Despicable Me, despite how its plot is basically identical to Megamind. It's proven a big hit in the States, and it arrives in the UK with Universal trying to consolidate the foundations of their new animation studio.

It's all about Gru, a supervillain who has fallen behind as he's grown older, and younger, more eager rogues jump into the fray. With an army of genetically engineered chattering yellow Minions, Gru launches his greatest plan yet- to steal the Moon and hold it to ransom. To achieve this, he has to best his rival, Vector, and plans to do so by adopting three young orphaned girls to work undercover.

I went in hoping for something on par with the excellent Cloudy with a Chance of Meatballs, and though it's not quite as memorable or massively enjoyable as that film, it's got a similar brand of imagination and sense of humour, and I liked Despicable Me quite a bit. The problem is, the similarities don't stop with Flint Lockwood's adventures. While I did like Despicable Me, I liked it a lot better when I saw most of it in other animated hits. 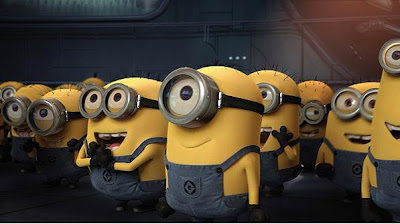 There's a grumpy and cantankerous protagonist who learns to let people in, just like in Up. There's a huge number of diminutive alien-looking things that are always getting into trouble, just like in Toy Story. There is- no, really- a dance number, just like Shrek. The latter is the worst offender, to be honest, because it feels like directors Pierre Coffin and Chris Renaud didn't know how else to end the thing. While it looks unique, it's certainly not original.

Oddly, it also feels a lot shorter than it actually is, which I suppose should be a sign that it went by quickly and I wish there'd been more. But instead, it feels like the premise wasn't big enough to support a 95 minute film. The plot moves quickly with the aid of a couple of musical montages that just come across as a bit lazy. So really, I don't want to see Despicable Me 2 (Me Too?) all that much, because I feel it'd stretch my patience a bit.

Steve Carell does a fine job of voicing Gru, with a cadence that falls between Ricardo Montalban and Bela Lugosi. It's still recognisably his voice if you listen hard enough, but it's always great to hear a relatively big-name actor bothering to create a character in their performance. So often in films like these, you have Angelina Jolie droning into a microphone and waiting to pick up a cheque, or pandas who might as well say "Hey kids, it's me, Jack Black!" 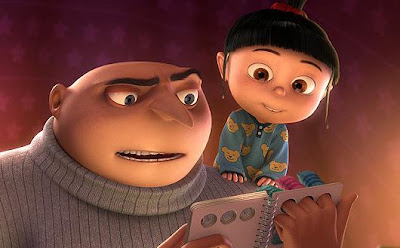 There are films far more original than Despicable Me that have still wound up being less engaging and entertaining. Cute is the order of the day, and even at its most saccharine, it's a charming film. It never really outstays its welcome, even with a slim premise. I strongly suspect that the French have done this premise better here than Dreamworks will manage in Megamind, but in the year that How To Train Your Dragon came out, let's keep our fingers crossed for a surprise. In the meantime, Gru and his minions provide predictable and inoffensive fun that will definitely keep the kids occupied if Legend of the Guardians just looks too weird for them.