You Know, For Kids! - THE HOLE 3D Review 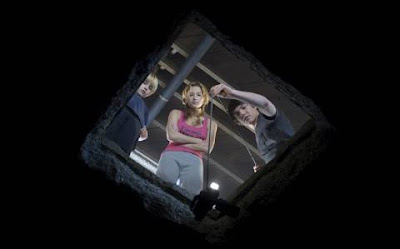 Joe Dante, he of Gremlins and Small Soldiers fame, is pretty much the reigning king of this kind of movie, mostly because no one's made an effort to take his crown since he last made a family-oriented horror film. And in The Hole, we finally have someone using irksome technology in a really appealing way, to tell a really compelling story.

That story involves Lucas and Dane, two brothers who move into a new house with their mother, only to find a trapdoor in their basement that seemingly leads to a bottomless pit. Along with girl-next-door Julie, their natural first response is to goof around with it. But the abyss also gazes and puts the kids up against their worst fears as it tries to claim each of them. 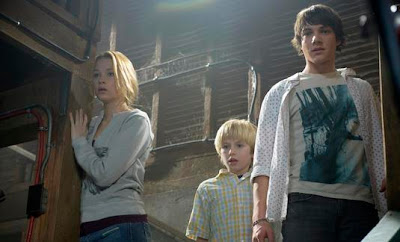 By family-oriented horror, I'm really talking about entry-level horror, on the same wavelength as Doctor Who. The best thing about this type of horror is that it scares out the optimum response from its audience without trying too hard, as you'd think it would have to. You could collect up the amount of blood spilled in this entire film in a thimble, but it offers up far more scares and thrills than its supposedly adult counterparts, like Saw or Final Destination.
Dante's aiming for the primal fears of childhood in his characters, whether irrational phobias, or more emotional fears, rooted in loss and childhood trauma. He doesn't trivialise the irrational though, actually giving ample reason for those fears rather than messing around with perspective to show how silly such a fear would be. Younger brother Lucas is terrified of clowns, for instance. By the end of the film, I'd be surprised if the majority of younger viewers weren't also terrified of clowns.
I mention Doctor Who, because it very much has the same target audience as this film. Anyone who enjoys being frightened by whatever nightmare fuel Steven Moffat has ignited each week will adore The Hole. It's not for the very youngest of children, but kids upwards of 8 years old will really go for this. The 12A certificate is pretty apt- this is definitely more extreme than PG-rated fare like Monster House or Coraline- but it's still suitable for some who wouldn't get in without their parents. It's a horror film for the whole family, and I'd even say it's worth shelling out for 3D tickets. 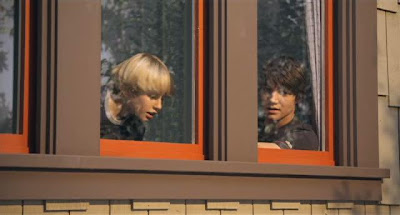 We've seen 3D used pretty superficially before now- if you want to quibble about other great examples, then I'll admit the flying scenes in How to Train Your Dragon were very good and no horror film has equalled the fun exploitation of the technology in My Bloody Valentine.  But here, Dante uses 3D to convey emotion. It's not beneath him to do the "throw stuff at the audience" gag, but it's always more intriguing when we see one of our heroes alone and afraid in the middle all that added depth James Cameron has been banging on about.
The only shortcomings of the 3D are reflective surfaces. It may seem like an odd niggle, but if you look at any given window or shiny object in this, it looks animated. There's presumably some confusing photographic reason for it, but it's occasionally distracting. There's also a bit of weirdly obvious ADR here and there too, marring otherwise great performances by the leads. Chris Massoglia and Nathan Gamble are believable siblings and Haley Bennett is probably going to be something of an adolescent crush du jour, like Phoebe Cates in Gremlins before her. 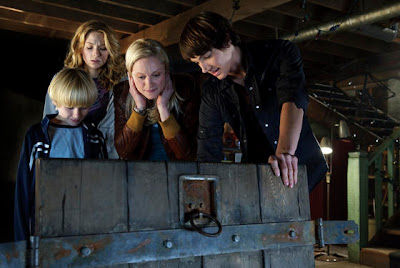 It's not exactly an illustrious field, but I also think it's the finest horror film of 2010. Indeed, it leaves one released just this week, Devil, in the shade. To directly compare for a moment, this has more jumps and tension in any given 10 minutes than Devil has in 80 minutes, and the catharsis of Shyamalan's film utterly undermines any fear factor that might have been there. Instead, Dante opts to make a film as much about the fear as about overcoming it, and it's supremely entertaining.
Maybe it's not quite as anarchic as Gremlins and Small Soldiers, but Joe Dante makes a very welcome return with The Hole. Mark L. Smith's script is part of the reason why we've got a more sentimental film, but that's not a mark against the film- it's never over-balanced by sentiment. I don't know how else to recommend it now that I've already said it's my favourite horror film of the year so far, and a 3D film that's worth the price of admission. There can be no higher praise! But it's dark, whimsical, and will spook viewers of all ages- everyone should check this out.
The Hole 3D is now showing in 3D (duh) in cinemas nationwide.
------------------------------------------------------------------
If you've seen The Hole 3D, why not leave a comment on the film and/or my review? Hey, there's arguably more shame in being scared by a torture porn film than by this family film, so go see it, huh?