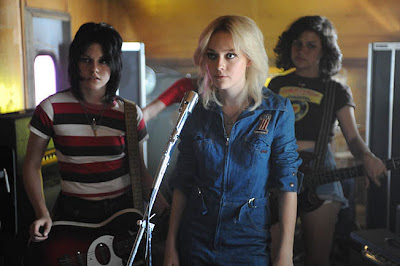 My lamentations on the musician biopic genre are well documented on this very blog, but here's The Runaways, another one that pulls tropes out of its hat like a feeble children's entertainer expecting surprise and wonderment from those that behold it. But meh, it's not all that bad.

It's basically condensing down the stories of Joan Jett and Cherie Currie, who became the main players in the formation of The Runaways, an all-girl punk rock band that at one stage could've taken the world by storm. But in the tradition of all these biopics, fame and success is always bad, and only addiction, division and ill health can follow.

Is there a lot to mark The Runaways apart from all those other biopics? The performances are largely excellent, it has to be said. Kristen Stewart vindicates every bit of praise her fans (including me) have given her when she makes a film like this in between lowering herself with crap like Twilight. It's great to see her mixing it up with Joan Jett's glowering glamour when she's sadly much more recognisable as The Amazing Baked Potato Woman, Bella Swan. 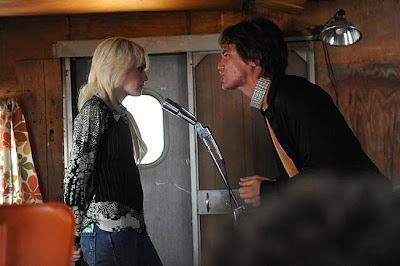 Likewise, Michael Shannon makes a formidable sleazy record producer. It's difficult to imagine many others invigorating the sheer leering quality of Kim Fowley in the way that Shannon does, feeding the ladies in his care a line about independence and feminism while simultaneously manipulating them terribly and reducing them to sex objects. But yeah, this is a film where Dakota Fanning is a sex object.

I doubt many casual film fans will be familiar with Hounddog because approximately no one ever saw it. I understand that it was Fanning's first foray into more grown-up roles and that it involved her character being raped. This collossal misjudgement of her audience and talents probably had something to do with the film being roundly slated. Quite aside from failing to convince with Cherie Currie's sex appeal, she just never convinced me here, full stop. Her previous work as a child actor loomed large over this one, for me.

Other than the performances, it's full of what you'd expect. Namely, those "Anakin Skywalker, meet Obi Wan Kenobi" lines that pop up in every one of these biopics from Walk the Line to Sex & Drugs & Rock & Roll. Also, a consequence of Walk Hard- The Dewey Cox Story being so under-appreciated is that I'm the only one who laughs every time a track title is clumsily inserted into the dialogue. 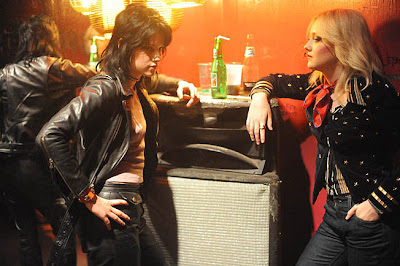 Everything is abridged, but the period the film covers, from the band's formation to Currie's departure, wasn't that long anyway. I'd rather have seen a full-blown Joan Jett biopic starring Stewart. This almost amounts to a non-story- real events compressed into the structure of this narrative type in the same way as the band was compressed into Fowley's mould. It all wraps up so fast that all the substance abuse we saw has no consequence at all, except for a laughably bad scene where Dakota Fanning pretends to be drunk in a supermarket.

The Runaways isn't bad, but for a film in which a record producer tries to cash in on something new because he's tired of the same old bullshit from angry young bands, there isn't much of an attempt to innovate accordingly. The only real attraction is the acting by Stewart and Shannon and getting to hear some good music on a cinema sound system. The subject is interchangeable from film to film with these biopics. There's no real insight or consequence, and I for one am fed up with music biopics.