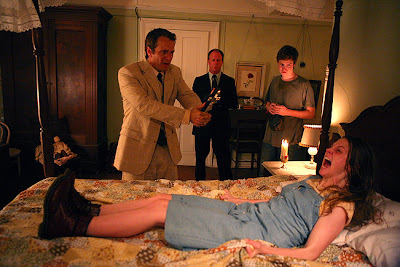 In the vein of other recent found footage horror films, The Last Exorcism covers the ultimate assignment for Father Cotton Marcus, guerilla style. The Marcus men have long been preachers, passing down the tricks of the trade in phoney exorcisms along the way. Cotton's scruples have come to the fore when he realises that more zealous exorcists are actually hurting the supposedly possessed rather than helping.

With a crisis of faith, some special effects and a small documentary crew, he aims to expose the trade of exorcism by showing on camera how he and so many others have went about in their line of work for so many years. However, the case he chooses as his last exorcism isn't as clear-cut as he first thought- is innocent young Nell Sweetzer mentally ill like so many of those Cotton has helped, or is she possessed by a real demon?

The ending is poorly executed. That's what you're hearing, right? All of the word of mouth around this film since its release has been fixated on the final two minutes of the film, and possibly with good reason. Nevertheless, to make a bullet point of the film's chilling punchline is to do its makers a disservice. Above all else, The Last Exorcism is a damn good horror film. 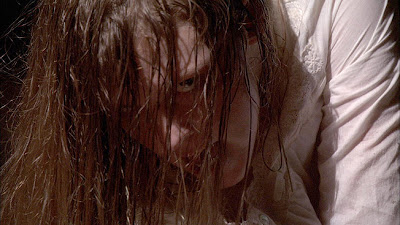 Is it a scary horror film? Well, not to me, but then all films with this subject matter are on the backfoot with me as a viewer- I'm an atheist, so that old horror adage of telling yourself "it's only a film" is just a given when it comes to religious horror. What this one did very well is entertain me. I can't think of a horror film in recent times that's made itself as accessible and enjoyable as this one.

I can definitely see this one really creeping out those who do have the fear of God (and in turn, the Devil) in them though. Director Daniel Stamm builds a strong atmosphere from the moment Cotton arrives at the Sweetzer's farm, playing with the audience's expectations by showing us how certain our hero is that this will all be very simple. And that's played wonderfully by Patrick Fabian.

Here's a puzzler for you- name me a good performance in an American horror film from the last ten years. They're not non-existent, but I bet you couldn't name, say, ten off the top of your head. So often in recent times, characters are little more than disposable killing fodder in the mean-spirited brand the genre has taken up in the Saw and Final Destination franchises. By contrast, the filmmakers here care about these characters, and they make us care too. 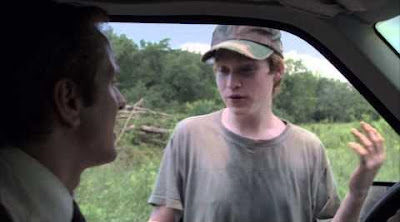 That's exclusively Patrick Fabian's province for the first 20 minutes or so. How good is he? Think Sharlto Copley in District 9. Fabian gives an absolute knockout performance as the jaded preacher, whose quick charm and confidence makes an audience feel safe, as he lets them peek behind the velvet curtain of exorcism practices. Then the curtain closes, and the horror ramps up, and Fabian is just as good there too.

Wisely, Stamm doesn't evoke The Exorcist much, beyond a quick one-liner from Cotton about Roman Catholics having "the movie". Our winsome and possibly possessed farm girl Nell, played marvellously by Ashley Bell, doesn't do anything involving 360-degree head rotations or pea soup, which gels with the ambiguity of her condition too. No, the film this is most like on a structural level is District 9, working well with the mock-doc format as opposed to trying to desperately bluff the audience into thinking this really happened, like The Fourth Kind.

With the exception of sporadic musical cues and occasional lapses into a two-camera setup where there should only be one camera, it holds up very well as a faux documentary for the first 80 minutes. Then there's that ending I mentioned. I should clarify, I've seen the film twice now. The first time I saw the ending, I despised it. I felt angry and cheated, and felt that Stamm had fell at the last hurdle and resorted to the most heavy-handed fumbling of a conclusion imaginable. 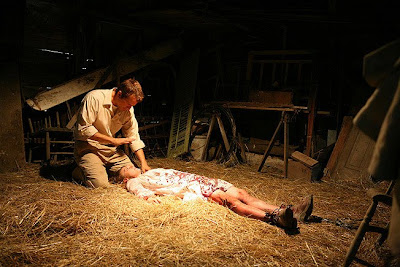 Second time around, I knew what you're in for. And it works. Alright, it's still poorly executed- after getting to know the characters so well, they're not served properly by how abruptly it ends, but hey, at least it's not an incompetent ending- the second time around, you see just how the screenplay has foreshadowing seeded throughout. The ending certainly shouldn't put you off seeing the most fresh and interesting horror film ever to have Eli Roth's name slapped on it. This is the guy who was judging a wet T-shirt competition in Piranha 3D not two weeks ago, and now his name is on a horror film miles away from the leering and hyper-violent shockers he's pumped out for the last few years.

Follow these instructions carefully. See The Last Exorcism. Then whether you like the ending or not, see it again. Because if you do like it, you'll be happy to give the film another outing, and if you don't like it, I hope you'll find the same renewed appreciation that I did. This is a clever, well-paced film with terrific performances and a very strong central enigma throughout. It has flaws, definitely, but I think we definitely need to see more films like this, and less of the mind-numbing horrors that bring out cardboard cutouts instead of characters. The power of Christ compels you!