The Zero Room #4- Silurians and Sunflowers

Back to back, the fifth series of Doctor Who has given us its most reflective story and its most progressive. This post covers the Silurian two-parter The Hungry Earth and Cold Blood (to be referred to henceforth by the latter name to save time) and poignant "celebrity historical" Vincent and the Doctor. 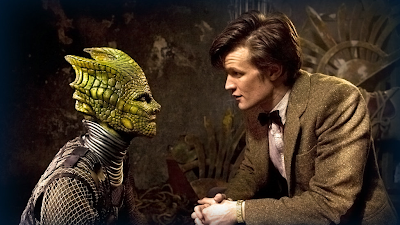 Aiming for Rio, the TARDIS rocks up in a tiny Welsh mining village in the near future at the beginning of Cold Blood. There, an enterprising team of scientists have dug further down into the Earth than anyone has before, but the Earth seems to be fighting back. From beneath the surface, the Silurian race emerges, disturbed by the drilling and annoyed that humanity has evolved all over their former home. The Doctor knows the homo reptilia of old and attempts to broker a peace between the two races.

So that's a leisurely-paced multi-episode story about a drilling project and the Silurians? Classic fans will around about now have noticed that this story's straight out of Jon Pertwee's first season, and it's certainly the best reflection of the classic series since the show returned in 2005. As to the Silurians themselves (whose origins and history I documented over on Den of Geek), they were pretty comprehensively redesigned. The use of prosthetics allowed for expression and some great acting from Neve McIntosh and Stephen Moore, but ultimately, most Silurian stories pan out the same.

What's always been interesting about the Silurians is that they're not really monsters, and that was nicely internalised to their race by Chris Chibnall's scripts, when we see the Silurian military at odds with its high command and its scientists. Arguably a lot more monstrous was doting mother Ambrose, played with equal measures of weakness and malice by Nia Roberts. The dichotomy between humanity and the Silurians remains interesting even when the ultimate outcome of a stalemate is predictable. 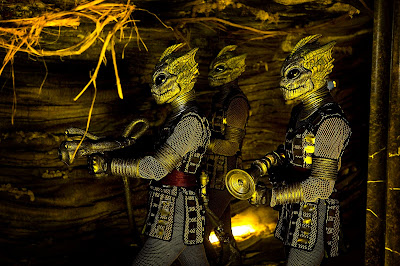 Ambrose aside, Chibnall is eager to write humanity at its best as a counterpoint to all the parochialism between races. To that end, we get Meera Syal on top form as Nasreen Chaudry, who now stands firmly amongst the ranks of Companions Who Never Were. Her excursion to the Silurian city with the Doctor is well acted and Nasreen is a very likable character whose return shouldn't be totally out of the question for Moffat and the crew at BBC Wales. Elsewhere of course, we have Arthur Darvill's Rory sacrificing his life at the end of the episode.

The trouble is, what should be Rory's finest hour is undercut by its relation to the series arc. Is the big twist that Rory is erased from history? Or that his death came from one of those pesky cracks in time? The bit of TARDIS signage the Doctor retrieved from said crack also served to distract from what should have been a much more emotional twist. It was upsetting, yes, but you can't shake the feeling that it was done so quickly that it can't possibly be permanent. I suppose we'll find out in a few weeks' time when the series finale rolls around.

All in all, Cold Blood makes for a sumptuously designed two-parter that gets better as it goes along. So on average, it's fine, and is restrained by the lack of anything particularly fresh for the Silurians to do. A cosmetic makeover does not translate into strong character development. Still, it's the best use of the characters since their inception back in 1970, so that's good to watch. The cast are as capable as ever, but you can't help but wonder if this might have been a much better single episode rather than the leisurely paced two-parter it ended up as. 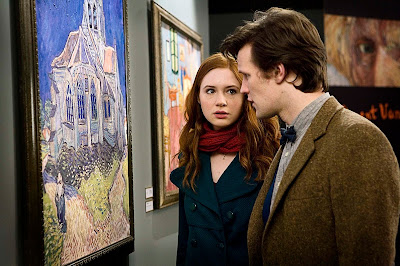 The events of the previous episode have only vestigial consequences in Vincent and the Doctor. The fairly staid title belies a strong story about Vincent Van Gogh in the final year of his life. When the Doctor and Amy go to an art exhibition and spot a monster in the window of "The Church at Auvers", they have to go back in time and ask the artist about it. They find a man utterly depressed by his lack of success and by his status as a pariah in the community. More importantly, he's distressed by visions of a savage beast that only he can see.

Richard Curtis wrote this episode. You might let that colour your expectations, but I very much went into this one expecting either a really fun romp or a bit of a misfire, in correlation with his Blackadder scripts or his romantic comedies respectively. I'm pleased to say that this is neither, and Curtis has instead created a story that is almost unique in the show's history. It maturely addresses depression and mental illness without ever forsaking the adventure element of the series format. While previous "celebrity historicals" have been of a more romp-y disposition- see this series' Victory of the Daleks, for instance- Curtis is altogether more probing.

The excellent writing is informed by a tour-de-force turn by Tony Curran as Van Gogh. He gives a perfect portrait of an utterly desperate and isolated man, whose life has only gotten worse with the arrival of the Krafayis, a great big parrot-polar bear hybrid who's largely invisible. Even with the necessity for those elements in a show like this, Curran is powerful and emotional. There are few things on television in recent memory more affecting than the out-of-the-leftfield breakdown Van Gogh has at one stage. It's brilliantly compounded by Matt Smith gadding about as Vincent sobs into his pillow, wracked with an intangible misery. 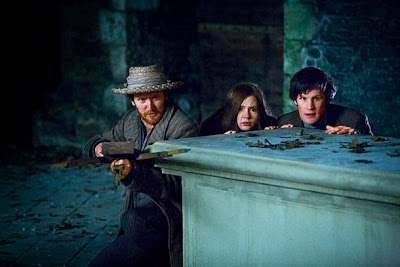 Smith and Karen Gillan rise to the occasion magnificently as well, with Amy Pond suffering from grief over Rory even though she can no longer remember why. Her chemistry with Curran is part of what makes the episode so compelling. Well, that and the cameo appearances by national treasure Bill Nighy. Nighy facilitates the episode's most moving scene as he describes Van Gogh's legacy with the overwhelmed artist himself within earshot. It's a shame that director Jonny Campbell doesn't trust us to be touched by this scene alone, laying "Chances" by Athlete all over it in a soundtrack choice that verges on being cloying and mawkish.

There are other problems with the episode. Like Amy's Choice, an episode this isn't quite as good as, it's better as a piece of drama than as an episode of Doctor Who. But while the Dream Lord and the pensioners could keep kids engaged, I have to wonder if the younger audience were confused and upset by the goings-on. Here we had the Krafayis, which was nicely designed but not particularly well-rendered, as special effects go. It wasn't embarrassingly bad, but it was more effective as an invisible monster than in the moments where we actually see it.

Vincent and the Doctor is something unexpected and fresh for the celebrity historical type that saw so much use through the Russell T. Davies era. We're still expected to take as read that Van Gogh is a genius as with Shakespeare and Agatha Christie before him, but Curtis actually goes to considerable lengths to show us why. In many ways that makes it the best since The Girl in the Fireplace. It's not the kind of episode you want to see every week, but you never want this standard of writing to go away. With luck, Richard Curtis will return to the series in the future, but if another episode never materialises, there's still a lot to admire in this.
--------------------------------------------------------------
I'll be back in three weeks' time with reviews of the final stories of the current series. Until then, why not share your comments below?