A New Man Saunters Away...

Although your Mad Prophet is typically concerned with blogging about film, he's also a rabid Whovian (fan of Doctor Who , for the unacquainted). With the series about to move into a new era under producer and head writer Steven Moffat, it's time for a blog about the show. 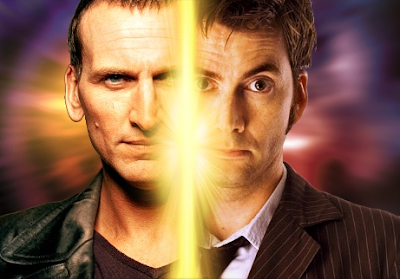 18th June 2005. Over the last thirteen weeks, I've been transfixed by an 900-year-old alien who talks like he's from Manchester, whisking Billie Piper around in time and space. She's been put in mortal peril during a fight with his nemeses, the Daleks, and he's seemingly given his life to save hers. I knew this was coming though, and that someone else would be playing the Doctor by 7.45pm. Because Doctor Who is the kind of show I really wish had been around when I'd been the same ages as the target audience (i.e. 8 years old), I had really got sucked into it, and I was certain this new fella couldn't possibly be as good as Christopher Eccleston had been. The show had been fantastic, and d'you know what? So had he.

A volcano of golden light erupted from the neck and sleeves of Eccleston's jumper and David Tennant entered the building. You can probably guess where this story is going. I still wasn't convinced by his first few seconds that the Tenth Doctor would be as good as the Ninth, but in the six months between the end of the first series of Russell T. Davies' Doctor Who revival and David Tennant's first episode proper, I went back over the series' rich history a little and grew accustomed to the idea of different Doctors. William Hartnell's irascible charm and warmth, Patrick Troughton's mischievousness, Jon Pertwee's tech-fetish, Tom Baker's eye-boggling Bohème and Peter Davison's exasperated observation of a chaotic universe, Colin Baker's pomposity and slight insecurity, Sylvester McCoy's wily machinations and Paul McGann's unfortunate brevity. I realised later that David Tennant was the first bonafide fan of Doctor Who to take the lead role. 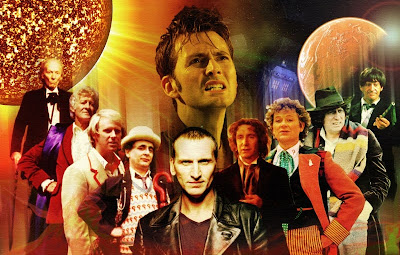 The news media frequently reference Tennant's accolades as the best Doctor from opinion polls and the like, and I'd actually agree. That's mostly because Tennant really properly loves the show. This is the man who answered 100% correctly with the show as his specialist subject on a Comic Relief special of Mastermind. The man who asked an audience on The Graham Norton Show if they knew the name of an extra from 1969's Troughton serial, "The Mind Robber". And aside from being a brilliant actor in any case, he's taken on the best parts of all his favourite Doctors in his own portrayal, creating the Nation's Favourite Doctor (TM).

Of course, all things must end, but between the announcement of Tennant's departure from the role in October 2008 and his final episode on New Year's Day 2010 was a long hard emotional slog. OK, so we got two fun romps at Christmas and Easter respectively, The Next Doctor and Planet of the Dead, but the TARDIS cloister bell was tolling all the way through the specials in the gap year of 2009. There was a promise that someone would knock four times, and that, as the Tenth Doctor put it in one of those specials, a new man would saunter away from the Doctor's death. 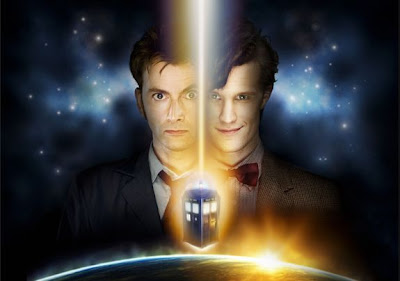 Enter Matt Smith, who was cast as the Eleventh Doctor and announced to the nation in January 2009. My honest first impression- that he looked slightly like one of those Easter Island heads. I reserved judgement on what he'd be like in the role, because all I really had to go on was a semi-lucid recollection of his supporting role in the Sally Lockhart adaptations. Certainly I didn't think it was a bad thing that he's the youngest Doctor to date- he's not a teenager, and his early interviews were instantly endearing. A shroud of secrecy surrounded the filming of the next series of 13 episodes, not only out of Steven Moffat's notorious enmity for spoilers, but also because the Tenth Doctor was still very much in the public eye in the run-up to his closing trilogy of episodes- The Waters of Mars and The End of Time, Parts One and Two.

David Tennant is a tremendous actor, and is my second favourite Doctor. Yep, second. Because as good as Tennant is, no one really trumps Patrick Troughton as the Second Doctor for me. He's mercurial, cheeky and utterly brilliant in that role whenever you see him, and it's the greatest tragedy in television history that so many of the videotapes containing his serials were wiped by the BBC in the 1970s. Now just six survive in complete form, with an extra serial completed using animation on DVD, which makes me and many other Whovians desperately sad. His was a wonderful portrayal and it's a shame we can't see more of it. 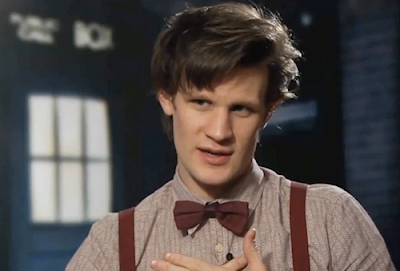 The point where I was really convinced Smith was going to be great was not around any of the clips released in advance of his first full episode, to be broadcast on BBC One tonight, but when I heard how he'd researched for the role. Back in January, he professed that he hadn't really watched the series before. By the time he started filming, he was clad in a bowtie and bumbling around his TARDIS in homage to his new favourite Doctor- none other than Troughton. While I'm sure the Eleventh Doctor will have his own identity, it heartens me to think that in Smith, we have a chance to see more of the Second than ever seemed likely once those tapes where wiped.

Tennant is still typically "my Doctor", having gone through much of the show with him in the lead role, and it was of course heartbreaking to see him go to his death at the start of the year. Opposite John Simm as a ravenous and mad Master and the sublime Bernard Cribbins as Wilf, knocking four times and causing the death of the very man he wants so much to live, Tennant gives a wonderful final performance to cap his tenancy of the TARDIS, with the audience agreeing with him all the way as he sadly utters his last- "I don't want to go." 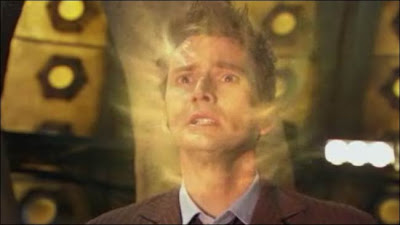 In typical TARDIS fashion, I'm going to skip back to just before and after this moment to let you know exactly why we should be looking forward to "The Eleventh Hour". Before the mortally Tennant finally makes his way back to the police box he's called home for so long, he encounters a vision of an Ood, a prophetic and telepathic race who reassure him that his death will not be the end. And there are few better summaries of the show's ethos through regenerating Doctors these past 46 years than the Ood's solemn "This song is ending, but the story never ends".

Directly after "I don't want to go", the score swells as the Doctor explodes with golden light once again, revealing Matt Smith as the Eleventh Doctor. With Tennant's popularity, this is effectively a parallel with the transformation from Tom Baker to Peter Davison back in 1981. Davison was restricted by poor writing to spend his first two episodes moping around the TARDIS after something called a Zero Room, but Smith is immediately pitched into a new life in a crashing spaceship, hurtling towards the Earth. His priority? "Legs! I've still got legs! Good!"

The show has survived many regenerations in the past, and after a year of following the Tenth Doctor's final sentiments right up to the point he actually voiced them, I can't wait for Doctor 11. Daleks, living statues and vampires all await an eager audience in the next 13 weeks, as the new man doesn't so much saunter from his TARDIS as bring it hurtling towards planet Earth, screaming and aflame. Geronimo!

The new series of Doctor Who begins with The Eleventh Hour on BBC One and BBC HD tonight at 6.25.

I'll be reviewing the latest stories, generally fortnightly, here on the blog throughout the series' run.
Posted by Mark at 22:02