Where The Grass Is Greener

Following the quite fantastic step-up in quality that Paul Greengrass brought to Jason Bourne with the latter two films of that trilogy, he's teamed up with Matt Damon once again to bring us Green Zone, an action thriller set around the conflict in Iraq and the search for weapons of mass destruction.

Chief Warrant Officer Roy Miller is getting fed up with the unreliable intelligence his investigation is being hindered by. In questioning the veracity of the source, mysteriously named Magellan, he uncovers the political machinations behind the war and goes rogue to uncover the truth. As something of a regular disclaimer, it's only my opinion here- others are available. As ever, mild spoilers may occur in the process of reviewing, but never so far as to spoil any major plot developments.
-------------------------------------------------------------- 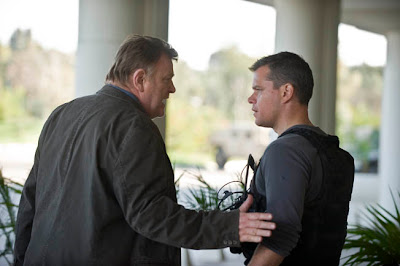 Last week's I Love You Phillip Morris opened with a title card saying "this really happened, it really did", yet somehow this sentiment is more desperately emblazoned across Green Zone. Of course the presumably unforeseen difficulty in bringing the subject matter to the screen is that we don't know everything that happened in the war just yet.

Indeed, the conflict is still ongoing. As yet, it does not have any historical weight, and so as a statement of "this really happened", it has approximately as much value as Titanic.

To say this feels a little harsh on what is essentially a taut and competently realised action thriller, as is expected from Greengrass, but in the wake of The Hurt Locker, it can only be seen that films about the conflict in Iraq are better when they're divorced from the politics.

Moreover, it does border on becoming visually incomprehensible at times. The shaky-cam aesthetic that was so acclaimed in the Bourne films becomes grating here, and certain action sequences are as obscured as watching through the lens of a hyperactive five-year-old jumping up and down in their seat.

This at least is a little more immersive than any 3D film yet released, because if you're really in the middle of a car-chase, there is no tripod holding your head still to calmly take in the action. Nevertheless, using it every time someone walks across a street or gets into a car gets tiring. 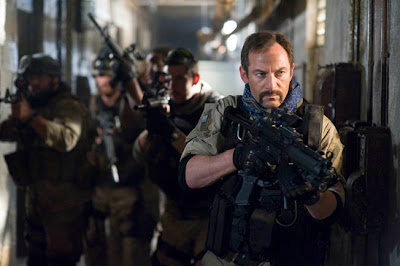 There are still some excellent action sequences, particularly the final scramble to extract Magellan from a Baghdad in the midst of a shock-and-awe campaign.

The worst you can really say about Green Zone is that Paul Greengrass makes the best film possible out of a less than inspired concept. The conspiracy element is at its most clunky when it deploys footage of Bush's "Mission Accomplished" fiasco, and it's less a thinking man's action film than a disengaged political statement that often reaches further than it can grasp.

Still, it's technically adept and is bolstered by a number of great performances from Matt Damon, Brendan Gleeson and Greg Kinnear. Jason Isaacs nearly steals the show with some magnificent facial furniture and a flawless American accent.

I have to admit, it's always satisfying even to see a less than brilliant film from Greengrass, whose penchant for realism always results in films that are high in adrenaline and thrills, even if this one is low on actual substance behind its admonitions.

Green Zone is still showing in cinemas nationwide, so if you've seen it, why not share your comments on the film and on my review below?

I'm Mark the mad prophet, and until next time, don't watch anything I wouldn't watch.
Posted by Mark at 11:05