The tenuous link between two of this week's releases-Oscar-winning character piece Crazy Heart and Irish fantasy-drama Ondine- is that they both prominently feature singing and Colin Farrell. The Irish actor is something of a paradox in that his heyday was in 2003, and yet the films he's made since have arguably been better. Except for Alexander, which would be unforgivable if it weren't for his career-best performance in In Bruges. So while I'm hardly a fan, I had to give these two films a go. 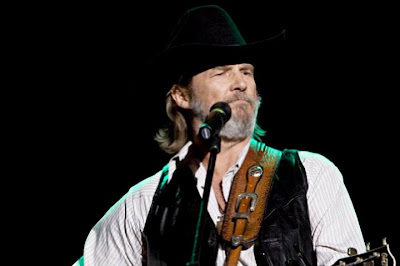 In the week following Jeff Bridges' long-awaited Oscar win for Best Actor, Crazy Heart has made it into UK cinemas. Bridges plays Bad Blake, a country-western crooner who's past his best and finds himself with prolific health problems, related to his copious drinking and smoking. He traipses from gig to gig, making a living and trying to recall the glory days. Continually outshone by the more manufactured strains of his protégé, Tommy Sweet (Farrell), Bad considers writing some new songs instead of relying on his popular back-catalogue. He's further inspired by a journalist and her young daughter, who allow him into their lives and give him a chance to reconnect with people.

Outright, I'm going to reiterate what I've been saying since Sunday- Jeff Bridges' win is well-deserved. Not only for his long career, which I suspect factored into the Academy's decision in this particular year, but for the marvellous performance he gives here as Bad Blake. For an actor who's most distinctive to me and many others as the Dude in The Big Lebowski, this is an entirely tangible and relatable character. Bridges embodies Bad from the moment he hops out of his car after a long journey and pours a milk carton full of piss on the tarmac. Similarly, Maggie Gyllenhaal is excellent here, and the romantic chemistry between the two is electric, despite the massive age gap between the two. She was up for Best Supporting Actress, but lost to Mo'Nique for Precious (unfairly, I dare say). It's also great to see Robert Duvall, who also produces the film, doing films like this instead of Four Christmases, having been the best part of most of Francis Ford Coppola's films back in the 1970s. 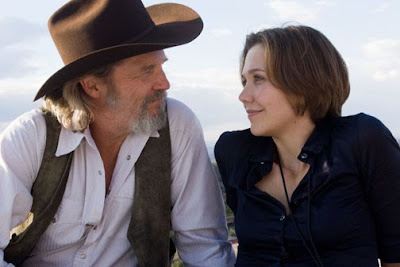 Some of Crazy Heart's critics have suggested it has a cosmetic similarity to The Wrestler, but with country music instead of heel-smacking, forehead-stapling sport. I'd disagree on that count, but would say that it's more similar to another Oscar favourite this year, Up in the Air. Like Clooney's Ryan Bingham in that film, Bad Blake is travelling so often that he can't really form or maintain relationships. But where Clooney slipped away to flirt with Vera Farmiga, Bridges contents himself by shagging groupies he meets at gigs, more advanced in years though they are. And those gigs come across well too- both Bridges, and latterly Colin Farrell, perform their own songs rather than lip-synching or using ADR, which is always good when actors play musicians. Unless, so I'm told, you're Pierce Brosnan in Mamma Mia.

Crazy Heart is engaging enough that you forget Bad Blake isn't a real person, which is more than I can say of most musical biopics, never mind other such character studies. It's bolstered tremendously by Jeff Bridges, whose tortured soul of a musician is still a million miles away from the slightly similar character played by Mickey Rourke a year or so ago. Bad is a magnetic character, and has a great dynamic with Gyllenhaal's Jean too. Country music isn't my thing, but the soundtrack is excellent too. And if the best sports films make you care even when you don't give a shit about the sport, then this is a musical drama par excellence.
-------------------------------------------------------------- 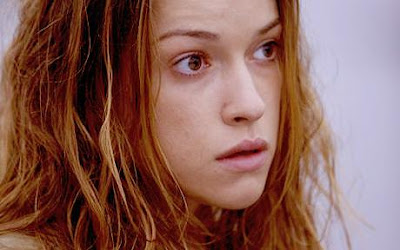 Colin Farrell takes a more central role in Ondine, where he plays Syracuse, a fisherman and recovering alcoholic who catches an unconscious woman in his trawler's nets just off the coast of his small Irish hometown. Unable to remember who she is and how she came to her current predicament, she adopts the name Ondine, meaning "she came from the water." When she reveals an unusual talent for singing fishes into Syracuse's nets, she enchants his disabled young daughter, Annie. Annie is convinced that Ondine is a selkie- a mythical creature who can live on the land for several years at a time, unless her subterranean spouse claims her back. Selkie or not, someone is coming for Ondine.

Sound familiar? Wondering if I've reviewed this already? Yes, it's Ponyo for grown-ups! But it does manage to be a superior film too, at the very least because it's not nearly as shrill as the dubbed version of Miyazaki's film. It's a well crafted and gorgeously shot folk-tale of a film, that straddles fantasy and drama with only slight unease. With a 12A certificate, it's occasionally shooting for the younger audience, but it also allows for copious swimming scenes with ingénue Alicja Bachleda stripping to her pants, which director Neil Jordan brings forward with gusto. The more rational of the two proffered explanations for Ondine's origins is also on the more adult side of things. To that end, a stock Romanian baddy comes stalking around the small town, slightly reminiscently of Christopher Fulford in Danny Boyle's Millions, another film which married a fledgling crime thriller storyline with a child's perspective on matters. 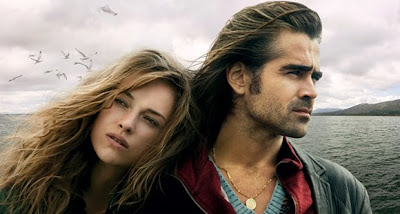 There's certainly nothing so remarkable as In Bruges from Farrell here, but then it doesn't have to be the best thing he's ever done, and fair play to him for the presumable influence of his star power in getting this film to the screen. Bachleda is appropriately dainty as the title character, although perhaps the tone might have came off better if she weren't so sexualised by Jordan's lens. Elsewhere, Stephen Rea, Dervla Kirwan and Tony Curran all make fleeting appearances as the townspeople with the appropriate level of befuddlement that Ponyo was missing. But the most charming performance on show is by young Alison Barry as Annie, who more or less clarifies Bachleda's airy ambiguity and keeps the central enigma engaging to the audience.

Clinging like a barnacle to a typical three-act structure, Ondine is still a very likable and enchanting film from a country that rarely seems to make a big noise in the cinema unless they're offended by Leap Year. Like its central character, it's alluring irrespective of its origin, and my big failing here is that I saw it so late in the week it was screening in cinemas. In the shadow of the following week's releases from directors like Paul Greengrass and Martin Scorcese, it seems like this is destined to be a one-week engagement for most cinemas. In the hope that it's more broadly seen later on DVD, I can heartily recommend this feast of charm and whimsy, even if it's a bit difficult to discern its target audience.
--------------------------------------------------------------
Still to come, probably over the course of this weekend, are Green Zone and Shutter Island, both of which seem a little more intense than either of these films. But if you've seen Crazy Heart or Ondine, why not share your comments on the films and/or the reviews below?

I'm Mark the mad prophet, and until next time, don't watch anything I wouldn't watch.
Posted by Mark at 21:35