Films like The Exorcist and The Evil Dead have been appalling and entertaining audiences for decades, and in cinemas this week are two films that are similarly revolting, albeit in entirely different ways- the harrowing awards darling, Precious, and a big dumb Travolta vehicle, From Paris With Love.

Taken director Pierre Morel collaborates with Luc Besson once again to bring us From Paris With Love, which matches James Reece, a US ambassador's assistant who's complicit with the CIA, with a brash twatbag of an American spy called Charlie Wax. Reece has to keep an eye on Wax's methods while carrying a vase full of coke and trying to stop the bad guys. Who are the bad guys? Why, terrorists, of course! Terrorists who plan to do very bad things to America, a country it's entirely easy to stop caring about when their top man in this film is played by John Travolta.

John Travolta isn't funny. Hell, I'm pretty sure he's barely capable of actually acting these days, but "John Travolta isn't funny" is a much more potent synopsis of From Paris With Love. To expand on his not being funny, you'll find he's once again in Taking of Pelham 123 mode, saying "motherfucker" as much as he can, because someone somewhere obviously thinks that's funny. It's not, and the in-jokes about the Royale with cheese are pretty soul-destroying too. It's like he's constantly nostalgic for times when he was in better films than this, or Old Dogs, or Battlefield Earth. He must be REALLY missing Quentin Tarantino.

Jonathan Rhys Meyers is as obscured by Travolta's hammy acting and sheer volume as many of his recent co-stars have been. But he gamely trundles from shootout to shootout, and is embroiled in the most token love-interest story you'll see in an action film this year. This isn't dumb fun, it's just dumb, and hateful to boot. For instance, one typically bullet-riddled scene has a shootout with a gang of Asian bodyguards in an apartment block, with a nervous Reece following a wave of destruction left by Travolta's accomplished douchebag, Wax. "How many more of them?", Rhys Meyers enquires. "By the last census, around a billion", Travolta replies. Doesn't a little bit of joking about racial cleansing go a long way? 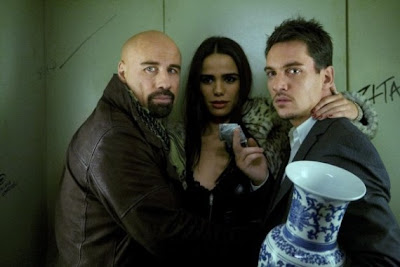 Wax is seen in one scene to leave litter on a park bench even though there's a bin not two feet away. The shot lingers even after Wax has gone out of it, and for a moment I wondered if it was a clever admonition of American wastefulness. In fact, between this and Taken, I have to wonder if Morel isn't actually executing some massive feat of irony and parodying American action cinema in his films by centring them around Americans and making them as xenophobic as possible without incurring charges of racial hatred. I'd actually be intrigued if I could stomach another viewing of this tripe. Any intended irony fails here because Taken was at least entertaining in its daftness, but this is just dumb and hateful, as opposed to just dumb fun. 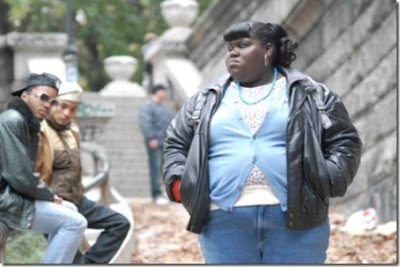 A much more subdued film than that is Lee Daniels' Oscar darling, Precious, and sadly its unwieldy full title, (take what you've got already and add Based on the novel Push by Sapphire) gives you a fair idea of the film itself. In Harlem, 1987, an obese and illiterate black girl called Claireece "Precious" Jones is pregnant with her second child by her own father. Her spiteful mother resents her husband's preference for her daughter and constantly abuses her, both verbally and physically. When Precious is drummed out of her old school, she goes to an alternative one where she's brought into contact with the caring Ms. Rain and has the chance to turn her life around.

Early on, the film put me in mind of an episode of Doctor Who from a few years ago, where John Simm's Master snarks about how our fugitive heroes- David Tennant, Freema Agyeman and John Barrowman- are "ticking every demographic box, so well done on that." In tackling issues of race, family, young pregnancy and poverty in a coming-of-age tale, it ostensibly seems like Lee Daniels and screenwriter Geoffrey Fletcher were very much on the awards season campaign trail. It's certainly gotten a lot of recognition thus far, with Mo'Nique one of the few absolute locks for an acting win this Sunday at the Academy Awards. I don't disagree that it's worthy of recognition for its performances, but I think it's curious that Mo'Nique and Gabourey Sidibe are the ones who have been marked out as the best. 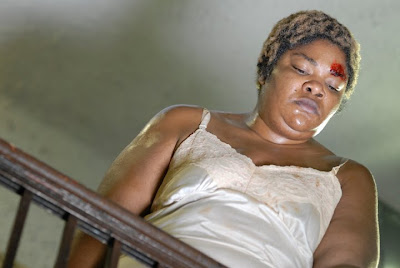 Mo'Nique is certainly quite good in it, but her character felt like it was drawn in broad strokes to me, and I never really felt Precious' mother was anything but a one-dimensional character, even towards the end of the film. She's too well-performed to be something out of panto, but she's not vile enough to appear as anything more than a particularly riled guest on Jerry Springer. That's not the actress' fault, as she copes rather well with what I feel was a weak script. Elsewhere, Gabourey Sidibe doesn't make the strongest debut here, but then she's not an actress- again, it's not her failing but Hollywood's that there aren't trained actresses working of the build required for Precious. Both are capable with what could easily descend into melodramatic caricatures, but I felt the really great performances came from Paula Patton and Mariah Carey.

Yes, that Mariah Carey. I understand the lack of awards recognition there, as she's only in it for a bit and she's also Mariah Carey, but she makes a surprisingly strong impression in the screentime she has. Patton is instantly endearing as Ms. Rain, and I really felt she elevated each scene she was in. That might seem somewhat incongruous with my criticisms of Sidibe and Mo'Nique, but in the scenes where those two were together I was always very aware I was watching performances rather than people, and there's none of the realism in that stuff that a film like this requires to work. And that's true of a fair bit of Precious. It's not mawkish, but it is cloying, really striving to evoke a reaction from its audience rather than letting it occur naturally. It's all the more jolting when the film lapses into loud and bright fantasy sequences- as bad as her life is, it's as if Daniels felt the audience needed those breaks from bleakness more than Precious.

Even with its overriding bleakness and desperate tugging at your heartstrings, Precious isn't a bad film, but it's not enjoyable either. Is it worthy of Best Picture? I think not, but there have certainly been worse films nominated in previous years. Aside from The Blind Side, which I haven't seen yet but suspect may be worse, I'd say it's the weakest of the ten nominated this year. Oscar glory isn't the only reason you ever go to see anything though, and the film remains an honourable but overwrought endeavour to bring important social issues to greater public awareness. Think Slumdog Millionaire with a more ambiguous ending, or Juno with a fuckton more misery. I don't see why anyone would want to see a film this depressing, but that's not to say that you shouldn't see it, full stop. The extent of performance on show left me feeling unaffected by the bleak stuff. If for whatever reason you want to see a film that Oprah Winfrey heartily endorses, make it The Princess and the Frog.
--------------------------------------------------------------
If you've stomached either From Paris with Love or Precious, why not share your comments below? For me, a viewing of Tim Burton's Alice In Wonderland by Disney is imminent, so that review and some awards-speak will be up as the weekend goes on.

I'm Mark the mad prophet, and until next time, don't watch anything I wouldn't watch.
Posted by Mark at 15:41