This Blog Is Your Blog

Rosebud. It's not me being lazy, folks- it's just that work gets on top of me at the moment. So I'm still seeing a lot of films, but if I sat around withholding reviews until I'd seen another film I could group it with, you wouldn't really have anything to read for long periods of time. So while I hope to return to posts with more than one review at a time, please don't be disheartened/shouty if there are a few like this. I am working on a special little thing for the end of the year that I hope will be appreciated by those who've been following my ramblings these last six months or so.

Me and Orson Welles is a period-piece from Richard Linklater, whose work has ranged from School of Rock to Before Sunset, and it chronicles the hectic development and rehearsal of the eponymous auteur's seminal production of Caesar in 1937. Welles rules the roost at the Mercury Theatre in Manhattan, and an aspiring actor called Richard Samuels, the "Me" of the title, enters into his world quite by chance. He's cast as Lucius after bumping into Welles on the sidewalk, and is quite immediately bedazzled by the glamour of the theatre. But the Mercury's future hangs on the success of Caesar, and as the days before opening night pass by, the cast and crew grow increasingly exasperated with Welles' conceit and perfectionism. 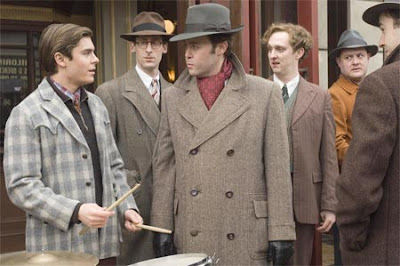 Make no mistake, the operative part of that titular dynamic is Orson Welles, played remarkably by Christian McKay. If you want a definition of "breakthrough", that's what his tour-de-force effort is, and McKay is sure to make a name for himself following this film. His Welles is all of the worst things you could think of to say about the man- he's arrogant, impolite and incredibly short-tempered. But more than that, he is incredibly charismatic. Welles was 22 years old at this stage of his career, and yet his authority and his genius is unquestionable from the moment he appears on-screen. When the frustrated artisans of the Mercury sit around for hours on end waiting for their director, you can believe he's worth waiting for. And there's also a terrific undertone to his performance. Welles is a man who thrives on appreciation, perservering only for success, and it feels like his moodiness is fed by the frustration that he can't realise his vision or achieve that acclaim all on his own- he needs his cast and crew. McKay sells that beautifully, and he's truly one to watch if this film is anything to go by.

And that's why it's a shame that Zac Efron as Richard has been sold as the main reason to see Me and Orson Welles. He has top-billing in the trailer and on the poster, when he's more or less utterly outclassed by McKay and by the sterling supporting cast. Credit where credit is due- I'm a lot more accepting of Efron now than I was before. As a Doctor Who fan, I can't necessarily vouch that John Barrowman's popularity is a result of any great acting talent, but I see how his background with singing and dancing makes him reminiscent of a matinee idol. Zac Efron probably has the same appeal, and in this one he's at least been given more to do on the Performing Arts side of things than on serious acting. His acting is indeed more tolerable here than in 17 Again, but it's still relatively sucky when matched against his co-stars. After last month's embarrassment with Robert Pattinson droning Romeo and Juliet in New Moon, we now have to endure Efron shakily emoting his way through speeches from Julius Caesar at various points, and these are the film's only awkward or uncomfortable points. That's why marketing him as the main draw was a poor idea, especially seeing as how the film has made a mere £166,000 at the box office on its opening weekend, indicating that few denizens of his young fanbase turned out to see a film about theatre in 1930s New York. 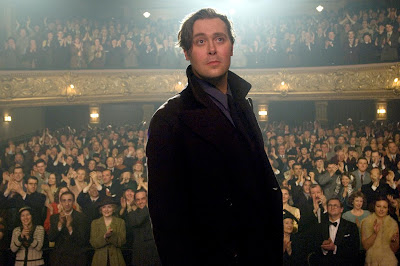 More fool them, because this is incontrovertibly the best thing Efron has ever done. He might not be the best thing about it by any stretch of the imagination, but there's plenty to interest all audiences. People who are unfamiliar with Orson Welles and his work may well enjoy the romantic storyline between Richard and Welles' secretary, and Welles aficionados will, as mentioned, find a lot to enjoy in McKay's performance. But bigger than either of these things, it implants a love of theatre into its audience. We're never more than a metre away from the nearest media player in the age of iPhones and internet cafes, but this is a film that revives an appreciation for the stage and its methods. This is not least because of how wonderfully the period setting has been recreated- I honestly couldn't believe this was filmed on the Isle of Man, because it's just so believable as a front for 1930s Manhattan. Richard Linklater wants you to feel comfortable in the setting from the opening frames until the end credits roll, watching some great performances coupled with a great story. What more could you ask of a cinema outing?

Me and Orson Welles is not a Zac Efron film. Nor is it a Christian McKay film, or an Orson Welles film, in that none of those men dominate it. It's a film about the stage- a romance that's more about a young man falling for the nobility of the theatre than him falling for a woman. Christian McKay's performance remains the best of the year to date, and anyone who loves the cinema or the theatre should grit their teeth against Zac Efron's involvement if necessary and go to see this as soon as they can.

Next up will probably be some family fare- Planet 51 and Where The Wild Things Are, to be specific. Sorry that I won't be reviewing Paranormal Activity, because I've been told that the best way to watch it is in your own home, late at night, so I'm holding out for the DVD release rather than going to the cinema. In the meantime, if you go and watch Me And Orson Welles, why not share your comments below?

I'm Mark the mad prophet, and until next time, don't watch anything I wouldn't watch.
Posted by Mark at 17:53