Review: Transformers- Revenge of the Fallen

I like midnight screenings. The atmosphere is generally good at such screenings, because everyone there has made an extra special effort to see the film first, so you can expect they'll be fans. It was with some trepidation that I remembered this while sitting in the cinema auditorium early on Friday morning, because it was clearly full of people who liked 2007's Transformers. Having rewatched the first film recently, I decided I can't hate it for being stupid. I can hate it for idolising both the US military and a fake orange porn-star who can't act her way out of a paper bag, sure, but not for being stupid. It's a Michael Bay film, so that's par for the course. However, I like to think I came to the sequel with an open mind- it wasn't impossible that Bay would create a totally superior sequel, and so I was cautiously optimistic once the trailers finished.

And what follows is my review. No summary for those who are just skimming- I demand that you read all of it. Mostly because this film will do huge numbers at the box office no matter what I say about it, and I honestly believe it's less painful to read this review than it is to watch the film itself. It's taken me this long to review it because I actually have had problems articulating how bad this is. I'm not so childish as to ruin the plot, so I've taken measures to make this review as spoiler-free as I possibly can. There is a fair bit of profanity, but I try to use that sparingly in reviews, so I won't apologise for the frequent verbal gesticulating in this one.

TRANSFORMERS- REVENGE OF THE FALLEN 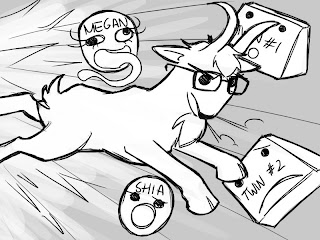 Who's in it? Shia LeBeouf (Indiana Jones and the Kingdom of the Crystal Skull), Megan Fox (How to Lose Friends and Alienate People), John Turturro (You Don't Mess with the Zohan), Ramon Rodriguez (Pride and Glory) and Josh Duhamel (Transformers).

What's it all about? Two years after the All-Spark was destroyed, Sam Witwicky (LeBeouf) is off to college when he's embroiled in the war between the Autobots (goody robots) and the Decepticons (baddie robots) once more. It emerges that the Transformers have had a much greater hand in human development than anyone realised, and the original Decepticon, known as the Fallen, is out for revenge on Autobot leader Optimus Prime, and on the Earth...

Any good? The paradox of Revenge of the Fallen is that, as a Michael Bay film, it ought to start badly, continue to be bad, and then finish awfully. You'd certainly expect exactly that from the build-up I've given this review, but I actually caught myself enjoying the film for the first 45 minutes or so. There's an interesting diplomatic set-up with the Autobots and the US Government, and Sam's comic-relief parents are used sparingly and with slightly better effect than in Transformers. Bigger than that however, the major set-piece of the first hour is a fight set in a forest that, besides displaying an apparent disregard for anything tree-related on Bay's part, is actually stunning. I cared about what was happening in a way I never had in the first film. The feeling of being slightly unclean aside, it was refreshing to actually enjoy what I was watching.

However, this does not last, and it becomes ever more apparent that Michael Bay is concerned solely with showing us what it looks like when you're given $200m with which to film whatever you want. And a lot of that is very bang, boom, wallop. As in the first film, the bangs, booms AND wallops are all vapid, uninteresting and same-y once that superbly realised forest sequence has been and gone. But this time the bangs, booms and wallops are spread over 149 minutes, and that's about 100 minutes too long, considering what follows. After a key plot turn at the end of this golden period, the plot derails with all the horror of a train full of puppies crashing into an aircraft carrier full of screaming babies. While the comic relief was restrained largely to Sam's parents in the beginning of the film, it feels like every other character here is now there for some lame attempt at a laugh. 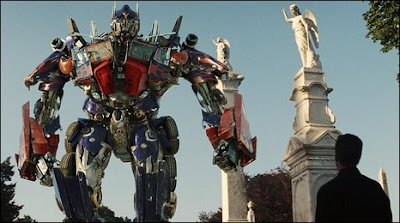 "I died for your sins, Sam... so stop putting me in shitty movies."
And boy, is the comedy in this film lame. I can only imagine Michael Bay was sat watching Verne Troyer hump Beyonce Knowles' leg in the third Austin Powers film and thought it was so funny that he put no less than FOUR humping jokes into this one. That people were laughing at these moments in the cinema made me despair for humanity, to put it bluntly. And then there were the Twins. Oh, sweet cattle of Seattle, those Twins. Remember how everyone really fucking hates Jar Jar Binks in The Phantom Menace? It's like they went out of their way to include TWO characters exactly as annoying as him. And these two robots get more screen-time than any of the 44 other robots in the film. Not that you can tell many of them apart, due to the simple fact that there's 46 of them. If one of the biggest problems in the first one was that you couldn't particularly tell what bit of robot was hitting whose bit of robot, then why in the name of Optimus Prime would you add MORE robots?!

And more importantly, why when you have the superbly voiced and animated Optimus Prime, Megatron and the eponymous Fallen, would you focus on the fucking Twins?! They are hideous, borderline racist stereotypes who should never have got past the drawing board- nay, the fucking skirting board! And I reiterate what I say about those other three characters- Megatron was clearly the best part of the first one and I was actually happy to see him back, and this time around, Optimus Prime is actually imbued with some of that "better than Jesus" heroism stuff that you hear the really dedicated fanboys talking about. And of course, there's the Fallen. In a film subtitled Revenge of the Fallen, you'd think the Fallen would really be the centre of the plot. And that his role would involve revenge. But after the plot hares off into so many different strands, trying to bring back everyone from the first film as well as introduce the aforementioned multitude of additional robots, the title just doesn't ring true. 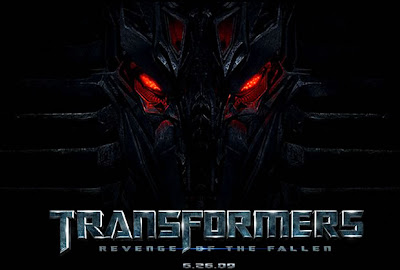 Nuh-uh. The film's not really about the Fallen. Or his revenge. Or anything, really.
And that's another thing! All the returning cast members! It's bad when a sequel needlessly suffers from "the whole gang's back!" syndrome, but this takes it to ludicrous extremes, as Bay's films are wont to. Ignoring the two abominable young leads for a moment (was their romance so timeless that we had to endure it for another 149 minutes?), more or less everyone is back. Remember Josh Duhamel and Tyrese Gibson's characters from the first film? They're back, for little reason other than having been in the first one and being in the US military. Remember Simmons, John Turturro's shady government character in the first film? He's back. Hell, they travel halfway around the world for Simmons, just to have him explain what the fuck has happened to the plot since they left the forest! And I feel slightly unfair criticising Simmons, because Turturro soldiers on with the poor lot he gets in the script, and is in fact one of the more watchable aspects of Revenge of the Fallen.

But now onto the inevtable. I don't hate Shia LeBeouf, but I think he's terribly over-rated- he's gone from being one of the more enjoyable parts of the first film to being one of the many awful parts of this film, via an excruciating turn as the son of Indiana Jones. There's none of the charm that some of his lower profile performances exuded, and I'm swiftly losing patience with his work, full-stop. And then there's Megan Fox. I have never found her hot, nor will I ever, and if karmic retribution should turn out to be an actuality, anyone who's told me that she is shall be struck down, as seen in the picture below. More pressingly though, Fox absolutely cannot act. This is a woman who really made a big impression in the world of acting in another Bay film, Bad Boys II, in the memorable and gruelling role of "Stars-and-Stripes Bikini Kid Dancing Under Waterfall". And in this film as in any other, she is rubbish, rubbish, RUBBISH. And she's still not attractive!

Yeah kid, that'll teach you to worship your false orange idol.
It's handy though, because Bay's portrayal of Megan Fox is a useful allegory for his entire approach to directing. You get the feeling that if he were directing outright honest porn instead of big Hollywood films, he'd be lauded as a genius. You know, by professors of cinema and such-like, as opposed to being lauded by 13 year old boys worshipping false orange idols. That's because his approach to anything, be it robots hitting each other, women fixing automobiles or most notably, the US military, has something leery and unsettling about it. Part of me is curious about what a Michael Bay porn film would look like- it'd have explosions and the like. But I digress, his pornographic approach to film is what makes this so inexcusable. Transformers is apparently critic-proof because this is a franchise for kids, not adults. Why then do we see so many references to women as sex objects, drugs (YES, drugs) and racial stereotypes? Are these appropriate for kids? I'm actually astonished that this film can still make money, and be accepted as a summer blockbuster, after the success of Iron Man, The Dark Knight and Star Trek, and even more amazed that this film has the same screenwriters as the latter of those films. How did they go so right there and so wrong here?!

Transformers: Revenge of the Fallen is the lowest common denominator- Leni Riefenstahl made more likable films than this. Even as enjoyable and as lightweight as I found the opening 45 minutes or so, there are still those hideous tropes of Michael Bay's filmography on display- lens flare, upskirt shots and masturbatory idolatry of the US military. Particularly nauseating is Sam's college, where every student looks like some variation on Megan Fox, which would personally be my idea of an academic nightmare. It gets the rating it does solely for the promise of the early film, and that much-mentioned fight in the forest. The rest is ludicrously self-indulgent, stupidly long and worst of all, it's not even entertaining rubbish. I've already mentioned the lack of the Fallen, so Transformers: How Fucking Annoying Are These Twins? might be a more prudent title for the film. Or more succinctly- Transformers: Bleh Bleh Bleh Bleh Bleh!

So it's 2/5. Though still probably the worst film of the year.

(shudders) The next update will definitely involve The Hangover, and probably Telstar and Looking for Eric, looking at my plans for the rest of the week. Just be glad we've got Transformers out of the way- I can't see anything this year making me rant at you as much as this did. One thing to come out of this review- I like to imagine Michael Bay scribbling that simile down in a notepad- "Aircraft carrier... screaming babies..."- for future reference.

Until next time, don't watch Revenge of the Fallen,
Mark

With thanks to Fearn Sobers for the Movie Goat art- for more of her work, go to her site, fesoes.net, linked on the sidebar.

Great review! I despise Bay's mastubatory fetish for the military too, and it should gain more currency in mainstream reviewers. Similarly Megan Fox is not hot, and Michael Bay seems to be Cartman made flesh.